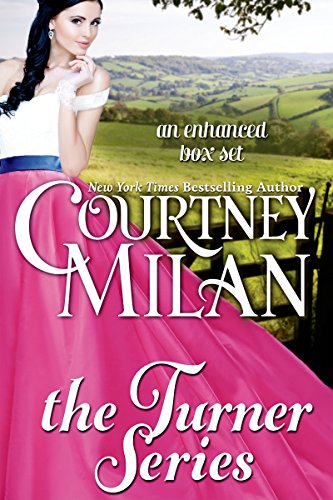 Unveiled: When Ash Turner heads to Parford Manor to survey the dukedom he believes he has won from an old enemy, he’s not counting on Lady Margaret, the duke’s daughter, who has sworn to foil him at every turn.

Unlocked: Elaine Warren has resigned herself to life as a spinster and a wallflower, but when Evan Carlton, the Earl of Westfeld, returns after a long absence, she’s afraid that he plans to torment her as he did before. This time, though, she vows to show him that wallflowers can fight back…

Unclaimed: Sir Mark Turner wrote the book on chastity–literally. Who better to bring him to ruin, then, than Jessica Farleigh, the courtesan hired to destroy his reputation?

Unraveled: Smite Turner is dedicated to his duty as magistrate, and he’ll stick to it…no matter how harsh he must be with the woman who shows up in his courtroom in disguise.

This is an enhanced ebook. In addition to the text of the book itself, it contains pictures, audio, and author commentary. You can read this enhanced ebook on any device, but the audio content may not be accessible on all ereaders. That content has been made available on the web, so you won’t miss anything if your device doesn’t support audio.