The Bride and the Beast 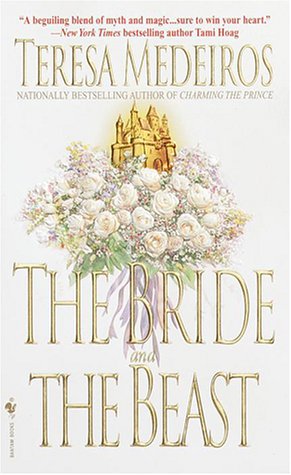 Teresa Medeiros makes her hardcover debut in this magnificently sensual and romantic tale filled with passion, humor, and suspense. It is the unforgettable story of two indomitable characters whose love affair is the stuff of which legends are made….

Gwendolyn Wilder did not believe in dragons.  But the superstitious villagers of Ballybliss did, and so Gwendolyn found herself bound to a post as a sacrificial offering to the Dragon who haunted the ruins of Castle Weyrcraig. Fifteen years earlier, someone had betrayed the Laird of Weyrcraig and his handsome young heir to the English for a thousand pounds in gold. Now the Dragon was demanding that very amount. The frightened Highlanders hoped that instead of gold, the fair virgin would satisfy the beast’s insatiable appetite. As for Gwendolyn, she never doubted that the so-called Dragon was a fraud. She knew there was a perfectly good explanation for the mysterious lights seen flickering in the crumbling castle and the unsettling sound of bagpipes drifting through the glens. But as she waited for whoever-or whatever-to claim his prize, she could not help trembling as a furious storm lashed about her…and she saw what appeared to be dark wings and a stream of silver smoke emerge from the shadows.  Rumor had it that the Dragon could take the form of a man, and so he did with Gwendolyn-a man who would not show her his face. He carried her into his lair and made her his prisoner, his pampered pet. And while she didn’t expect to be eaten by the fire-breathing Dragon of Weyrcraig, neither did she expect to be warmed by his sensuous caresses or devoured by his passionate kisses.

The Dragon had demanded gold and the fools had given him this golden-haired maiden. She was the very last thing he expected-and now there was no way he could let her go. She could never know that he was no monster but a flesh-and-blood man who had just laid eyes on the one woman who could slay him. Still, this supremely handsome man of devastating virility was more dangerous than any dragon. He would take it upon himself to enchant the practical Gwendolyn as she had enchanted him. He would weave a spell of sensuous magic around her that would defy all her commonsense notions and tempt her to believe in something even more unlikely than dragons and more powerful than the past that threatened them both-true love.

The Bride and the Beast by Teresa Medeiros