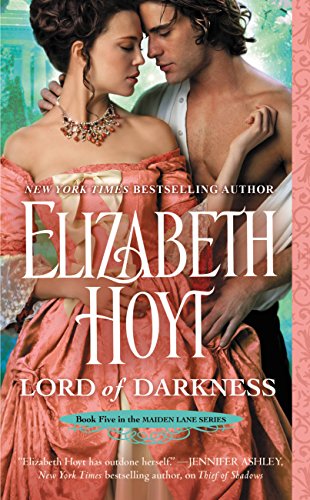 When Strangers In The Night

He lives in the shadows. As the mysterious masked avenger known as the Ghost of St. Giles, Godric St. John’s only goal is to protect the innocent of London. Until the night he confronts a fearless young lady pointing a pistol at his head—and realizes she is his wife.

Lady Margaret Reading has vowed to kill the Ghost of St. Giles—the man who murdered her one true love. Returning to London, and to the man she hasn’t seen since their wedding day, Margaret does not recognize the man behind the mask. Fierce, commanding, and dangerous, the notorious Ghost of St. Giles is everything she feared he would be—and so much more.

Desire Is The Ultimate Danger

When passion flares, these two intimate strangers can’t keep from revealing more of themselves than they had ever planned. But when Margaret learns the truth—that the Ghost is her husband—the game is up and the players must surrender…to the temptation that could destroy them both.

Lord of Darkness by Elizabeth Hoyt