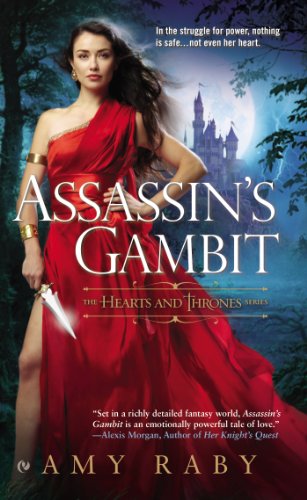 Vitala Salonius, champion of the warlike game of Caturanga, is as deadly as she is beautiful. She’s a trained assassin for the resistance, and her true play is for ultimate power. Using her charm and wit, she plans to seduce her way into the emperor’s bed and deal him one final, fatal blow, sparking a battle of succession that could change the face of the empire.

As the ruler of a country on the brink of war and the son of a deposed emperor, Lucien must constantly be wary of an attempt on his life. But he’s drawn to the stunning Caturanga player visiting the palace. Vitala may be able to distract him from his woes for a while—and fulfill other needs, as well.

Lucien’s quick mind and considerable skills awaken unexpected desires in Vitala, weakening her resolve to finish her mission. An assassin cannot fall for her prey, but Vitala’s gut is telling her to protect this sexy, sensitive man. Now she must decide where her heart and loyalties lie and navigate the dangerous war of politics before her gambit causes her to lose both Lucien and her heart for good.