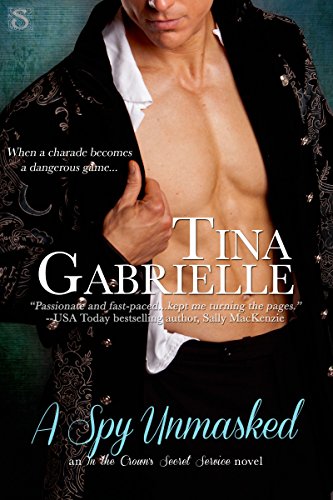 The mission did not go quite as Robert Ware–known in society as the new Earl of Kirkland–planned. A spy in the service of His Majesty, Robert is a “guest” at a masquerade party as he retrieves vital information for a murder investigation. Until he’s quite unexpectedly interrupted by an exquisite, masked woman with glittering green eyes. And a pistol she has cocked and aimed right at him…

Lady Sophia Merrill has defiantly taken up justice’s shining sword, determined to expose the brigand who murdered her eccentric but brilliant father, and stole his latest invention. Now she must masquerade as Robert’s betrothed in order to infiltrate the Inventor’s Society and find the killer. But the undeniable potent attraction between them not only imperils the investigation, but Sophia’s reputation…and both of their lives.

A Spy Unmasked by Tina Gabrielle