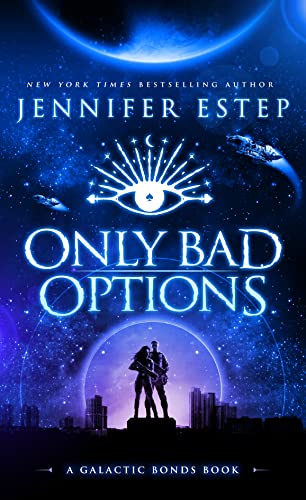 I’d never heard of a space opera before. Having just read my first, I’m not sure that I’m qualified to define it, but I can tell you that I absolutely love it! This is 429 pages of reading joy. That this is book one in a series fills me with delight – so many happy reading hours ahead! As I see it, a space opera seems to be part romance, part space adventure. Let’s dive into the romance first.

Meet Vesper Quill. Great name. Great personality. Great brain. Little bit of magic. Vesper works as a ‘lab rat’ on one of the temperate planets. She fixes design flaws in small appliances in Kent Corp’s research and design lab, but she sticks her head above the parapet when she points out that her employer’s latest military cruiser has a crucial design flaw. The recent crash that killed hundreds? Not due to pilot error. This lands Vesper in a world of bother.

In the midst of that bother, she meets Kyrion Caldaren. Specifically, she saves his life on a battlefield. (The first chapters of this book are a RIDE!)

Kyrion, a self-described monster, is one of the Arrows. They are the elite fighting force who work for Lord Callus Holloway. Holloway is the leader of the galaxy and beneath him are the Regal families, all of whom have a lot of magic and a lot of money. (The Kents of Vesper’s Kent Corp are also a Regal family).

Kyrion Caldaren is the head of one of those Regal families. So he’s a good fighter, he’s wealthy, he’s got a lot of magic, he’s part of the elite and now he’s got Vesper. Or rather, they’ve got each other and it is in both of their best interests to reveal the truth of the cruiser’s crash. Getting the evidence together and presenting it to Holloway is a winding road that takes them a good chunk of the book to figure out.

The blurb labels this an enemies-to-lovers book, but it’s not giving the full story. Vesper and Kyrion certainly start off as enemies, but they don’t become lovers. Oh, there’s a magical bond from the get-go and there’s a (delicious!) thawing between them, but they do not become lovers.

Show Spoiler
They skip that part because of something much more committed. They have a Galactic Bond.

But this is not necessarily something to be celebrated as it has consequences for both of them. In fact, they spend much of the book trying to work out how to break their bond without actually killing each other (although that is their first impulse in the early hours of the bond’s formation)

There are also historical romance elements to this story. Kyrion is for all intents and purposes a space duke. The Regals live on a fancy boulevard on Corios along which they ride in carriages. They hold balls to celebrate things. They are the elite. It would not have shocked me if they visited a space version of Almack’s Assembly Rooms. They don’t, as it turns out.

If you go into this book expecting a standard romance arc, you’re going to be disappointed. There are no kisses, no cuddles. In fact, the book doesn’t even promise a HEA. It ends on a bit of a cliffhanger where resolution is implied, but not given. As this is the first in the series, I have to hope that the HEA is coming.

If the part of enemies-to-lovers that you enjoy most is the tentative thawing of relations between two enemies who have to put up with one another, then this book will deliver in spades! During that process, each character is revealed layer by intricate layer. Both Vesper and Kyrion have rich backstories. They also both embark on their fair share of emotional growth throughout the book, but it’s done so subtly and so slowly that it feels natural.

The other part of the space opera equation is the space adventure. We’re treated to some outstanding worldbuilding. I’m by no means a fantasy/sci-fi expert, but this book fed me information as I needed it so that I understood the importance of events and actions. The galaxy itself is a wonderful mash-up of our own capitalist system, Regency-era elites, advanced space stuff and magic. Everything hangs together beautifully and the system has internal integrity.

As to the adventure part, I had little spikes of adrenaline as certain clues were uncovered or events discovered. The quest that they embark on (to uncover the truth of the military cruiser’s crash, amongst other things) is tautly plotted and very rewarding, independent of the character development and the romantic arc.

If book 2 is about the couple I think it’s about, I am counting down the seconds to its release. If you too would like to surrender your worries and indulge in a space opera, I cannot recommend this book highly enough. The slow-thawing partnership amid social barriers and class boundaries, all set within a rollicking space adventure, made me incredibly happy.

Only Bad Options by Jennifer Estep