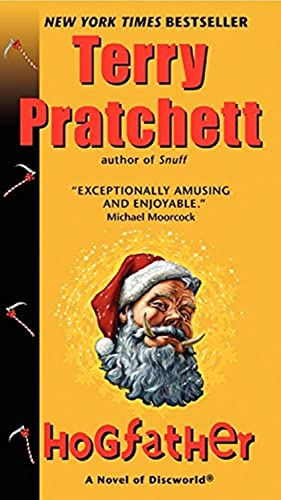 In an alternate universe, the planet Discworld is carried on the backs of four elephants, who are standing on the back of a giant turtle. In the Discworld books, Terry Pratchett satirizes aspects of our own world with a combination of affection, impatience, and asperity. Terry Pratchett’s writing tends to be free of two things: meanness (there are mean characters, but the author’s view seems to be stern but compassionate) and bullshit. The morals are not subtle but they are leavened by humor – so much humor! Every book is a stand alone, but there are certain recurring characters. In Hogfather, Discworld fans can rejoice in the presence of Death, who ALWAYS TALKS LIKE THIS, Death’s granddaughter Susan, the wizards of Unseen University, and a brief but memorable appearance from Col. Nobby of the Guard.

In Hogfather, Pratchett pokes some fun at, and makes some sharp points, regarding Christmas. Oh sorry, I mean Hogwatch. Totes not Christmas. My bad.

In Discworld, or rather, in the Ankh-Morpork region of Discworld, winter solstice is marked by the arrival of Hogswatchnight. If you’ve been good, and you hang up your stocking (or in one case, your pillowcase), the Hogfather will visit and leave gifts. He rides a sled pulled by hogs (it’s very agricultural). But this year the Hogfather goes missing and who arrives to fill in the gap? Death, who is thrilled to finally have a job in which people are happy to see him.

Any proper Discworld novel is crowded with characters and plot and problems and this is one of the best. We have, among other things:

So, why do I read this every year? Well, first of all it’s familiar and its funny. I have a love/hate relationship with Christmas and it wears me the heck out, so it’s not like I have the energy for War and Peace. This book makes me laugh so hard, in so many ways, and every year I find a new favorite line. This year I was especially delighted by this rather petty exchange between wizards, when they discover the “Hair Loss Fairy”:

“No sense in being bashful about goin’ bald,” said Ridcully evenly. “Anyway, you know what they say about bald men, Dean.”

“Yes, they say, ‘Look at him, he’s got no hair,’” said the Lecturer in Recent Runes.

And then there’s this inspiring moment:

Then the Dean repeated the mantra that has had such a marked effect on the progress of knowledge throughout the ages.

“Why don’t we just mix up everything and see what happens?” he said.

And Ridcully responded with the traditional response.

For me, though, the real draw of the particular book is that it reminds me of things that I need to be reminded of. It reminds me that life is not fair but it bloody well should be. It reminds me that fantasy is vital to humanity. It reminds me that regardless of one’s religious beliefs, and mine seem to change approximately once every five to ten years, the rebirth of the sun at winter is a glorious thing. And it doesn’t hurt to try to be a decent human being, too, especially if you can keep it up all year. As Death’s assistant, Albert, says, when Death decides to teach people the real meaning of Hogswatch:

“It’s all about the sun, master. White snow and red blood and the sun. Always has been.”

“VERY WELL THEN. THE HOGFATHER CAN TEACH PEOPLE THE UNREAL MEANING OF HOGSWATCH”

Albert spat over the side of the sleigh. “Hah! ‘Wouldn’t It Be Nice If Everyone Was Nice,’  eh?”

“THERE ARE WORSE BATTLE CRIES”

Every northern hemisphere culture has some story or festival on or near the winter solstice, and they all involve light. We don’t have traditions of hanging lights and lighting candles and fighting with our families over dessert because it’s cute, and we don’t set our major religious observances during solstice out of coincidence. We have these traditions because winter is scary, and dark, and long. People need light, hope, and each other.

Pratchett focuses on the significance of solstice in general, and Christmas in particular. It’s easy to forget the true meaning of Christmas while shopping at the mall, but Pratchett’s characters are on hand to remind us that the secular rituals of Christmas have meaning beyond the superficial.

Above all, Pratchett reminds the reader that the ability to imagine and create plays a vital role in making the human spirit human. Death insists that if the Hogfather ceases to exist, the sun will not rise the next day. Susan insists that this is obviously untrue. You’ll have to read the whole book to find out why they are both right. Luckily, you’ll enjoy it!