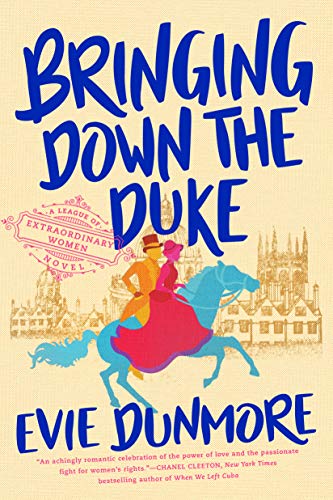 Bringing Down the Duke

Bringing Down the Duke is a historical romance set in England in 1879. It involves the early days of the women’s suffrage movement, so basically I’m all, “You had me at suffrage movement.” Every time they focused on romance drama instead of suffrage drama I got all sad but then cheered up because the romance was very good. This story excels in terms of entertaining characters, and I’d love to see a spin-off story about almost every single one of them.

Annabelle Archer wants to go to Oxford, which just opened its first women’s colleges. Since her father died, Annabelle has been her cousin Gilbert’s “maid for everything.” I do not want a spin-off about Gilbert, who is exercable. Anyway, after some deft manipulation by Annabelle, Gilbert agrees to let Annabelle go to Oxford as long as she sends him two pounds a week so he can hire someone to take her place in the household. In addition to the money, she must have perfect moral conduct.

This is a problem, because Annabelle’s scholarship comes from the National Society for Women’s Suffrage, and a requirement of the scholarship is that she volunteer with the society, which, surely in Gilbert’s eyes, would be immoral. In addition to volunteering and studying, Annabelle has to tutor pupils and work as her professor’s assistant to raise the two pounds a week, which means that she doesn’t eat or sleep very much.

Annabelle is ordered to try to win the Duke of Montgomery (Sebastian) over to the suffrage cause, but he has his own problems. The broody and intimidating Montgomery has a ton of family baggage (literal and metaphorical) and is trying to reclaim the land that his deceased father lost at cards. He has been ordered by Queen Victoria (who, both historically and in this book, vehemently opposed women’s suffrage) to ensure that the Tories win the upcoming election. If they win, he gets one of his castles back and if he loses, well…that would not be amusing for anyone.

For various plot reasons Annabelle and Montgomery end up spending a lot of time together at his estate and obviously they fall madly in love, but alas, an ambitious aristocrat such as himself cannot marry a commoner like Annabelle, plus he has this election to manage, but clearly they are meant to be, and thus ensue many delightful scenes and awkward encounters that will surely delight the reader. Being the person I am, I was especially thrilled when Montgomery provides Annabelle with a warm bed, a new coat, a pile of books, and lots of food. Surely books, naps and snacks are the way to everyone’s heart.

I have to admit that two minutes after finishing the book I remembered almost nothing of what had happened with the exception of a few jewel-like scenes and the characters. Not only “alpha but not asshole” Montgomery, of course, and Annabelle, who is fantastic, but also the supporting characters. Through her work with the suffragists, Annabelle becomes friends with a wonderful group of women, each of whom deserve their own story. Sebastian’s younger brother Peregrin is denounced by Annabelle as being “spoiled” but I see hidden depths. I find Annabelle’s professor, Jenkins, to be quite sexy despite Annabella’s utter lack of romantic interest in him (he offers her a mutual convenience proposal):

He was, of course, a brilliant man, and an eligible bachelor, too, not too old and with nice teeth and a good set of shoulders…he had taken her to a concert. He bickered at her in Latin twice a week and he fed her apples.

My God, Annabelle, what does it take to make you happy? A man who bickers in Latin is nothing to sneeze at! Bronte-types like Montgomery are exhausting! Go for the professor!

Alas, the villains tend to be one-dimensional. Griffin is a one-note, stuffy man who is almost a parody of the type. Queen Victoria is not just mean, which to be fair she sometimes historically was, but also she is foolish. On the other hand, Sebastian’s ex-girlfriend, who he treats quite badly, does something bad but her motive is not jealousy, and she makes up for it later. Really, Sebastian’s treatment of this character lowered his estimation in my eyes so far that his book offerings to Annabelle barely made up for it.

Also, after 323 pages of “we can’t possibly marry,” in a 335 page book, the requisite romance novel happy ending kicks in and it turns out that they can, possibly, marry, and that it isn’t even difficult. Is it possible that I am becoming too much of a curmudgeon to read romance?

Click for ending spoilers and my cold dead heart.

What kind of cold, dead heart says, “Ugh, why didn’t you decide that you could just spend a couple of years laying low in the Mediterranean until the scandal dies down 323 pages ago?” Mine, apparently. Don’t worry, they are still spending time in England so Annabelle can finish her studies.

Nitpicks aside, I very much enjoyed this book and look forward to a sequel. Personally, I ship Annabelle’s society friend Hattie with Professor Jenkins. Fingers crossed!

Bringing Down the Duke by Evie Dunmore