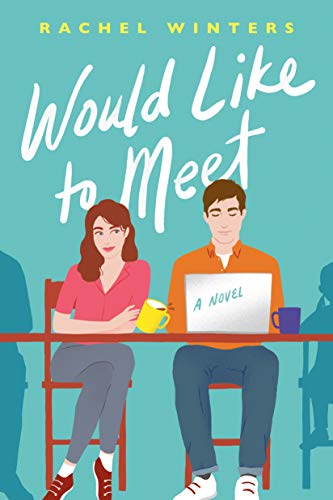 I was raised on classic rom-coms like One Fine Day and While You Were Sleeping (which I will never rewatch as I fear they’ve not aged well) and for each new outing of a tried and true trope, I continue to be there, first in line. So my appreciation for the trope is as much nature as it is nurture. As a result, I am delighted to report that this book has SO MANY OF THE TROPES, but its specialty is my personal favourite: the meet-cute.

Evie Summers – both star and narrator – is the assistant to Monty – sole agent at the eponymous William Jonathan Montgomery & Sons Agency for Screenwriters (a name as poncy as its owner). She’s been there for seven long years and has yet to be promoted to ‘agent’. Evie’s dream had been to be a screenwriter, but when her Dad died, she lost all confidence. Her friends, known by the delightful acronym JEMS (Jeremy, Evie, Maria and Sarah), know Evie is destined for more than fetching Monty’s dry-cleaning but they also know that she is never going to be promoted as Monty is an ass.

As the book opens, the agency is on the brink of collapse. Evie has three months to get Ezra Chester (JEMS calls him NOB – Number One Boychild) to complete his second script or the whole agency folds. His first script landed him an Oscar, but for three years his talents have lain fallow with no sign of even a single page being written. Ezra’s second script is supposed to be a romantic comedy, which he claims is ridiculous and ‘beneath him’ (though not so ridiculous that he refused to sign the contract or accept the advance). This is definitely a Daniel Cleaver 2.0 situation, except I kind of ended up rooting for him (at least for a couple chapters – I won’t reveal which chapters!) So far, so normal. This is where the standard rom-com would choose a trope and run with it. Evie has a different plan though. She agrees to arrange a variety of meet-cutes for herself, write about these escapades and then send her written reports to Ezra. In return, Ezra has to start (and finish!) the script. As a plot point, it’s pretty weak and I had to really suspend my disbelief to buy into it. But suspend my disbelief I did, and from that point the plot was as sturdy as a Nora Ephron.

In the style of Bridget Jones, we have two heroes vying for our heroine’s attention, although neither is particularly heroic about it, at least initially. I’ve already introduced you to Daniel Cleaver 2.0 (AKA Ezra Chester), but we also have a Mark Darcy 2.0 in the form of single dad, Ben. Bits and pieces of Ben’s history are dropped like jelly beans throughout the book. Does Evie go with sexual chemistry or kindness? Because they don’t seem to co-exist in one suitor, but that could change. At the end of the book, I do like Evie’s choice, but it wasn’t as satisfying as I’d hoped. This could well be a result of sudden, intense work stress on my part rather than actual flaws in the plot.

As Evie deploys every meet-cute possibility with which pop culture has gifted us – none of which end well – it gave me the chance to not only see these tropes through fresh, feminist eyes, but also to consider the context within which these tropes take place. Usually, the ‘makeover’ or the ‘spilt drink’ occur in the bubble of hero and heroine. In this book, we see these (let’s be real) ridiculous tropes and how they impact a community of people. These tropes are all given the same gentle if incisive going-over. While some of my teenage fantasy bubbles were certainly popped, in the process it made space for bigger ideas of love. Yes, this is a romance novel, but it is also a novel about friendships and families and the love that binds those bonds. Our heroine does not live in a world in which romantic love determines her worth or is the soul purpose of her actions. Here, we have a woman who would quite like love, but also very much wants good, strong friendships and a close relationship with her mom .

In romantic comedies, friends are at most comic foils and at worst frenemies. Either way, they’re usually sidelined. In this case, JEMS takes up more space, both in words and heart. At some point in the novel, Evie realises she has been a bit of a shit friend (we’ve all been that friend at least once) and in atoning for her actions, we see again that it is love – in its widest sense – that holds her together. The friends have a chance to develop as individuals and as a result their friendships deepen. For the most part, the friendship group is based on honesty and kindness, but Jeremy has a way with a snarky comment and Maria is a little saintly and Sarah tends to be a control freak. They are flawed individuals which lifts them from a sad flat supporting role, into being little rounded character souffles of their own. I will say that once or twice, they’re a little bit nasty about Sarah and her A-type personality. This was a little close to the bone for me, as I’m firmly A-type. As a result, it’s hard to gauge if they were actually mean, because I am very sensitive to any criticism in the vein of ‘too intense’.

Our two suitors have some pretty substantial hills to climb: Ezra has his moment of reckoning in the form of his deadline and Ben has some things in his past he needs to deal with. Each friend does a bit of revealing and growing as they share the less happy parts of their lives with each other, most notably Sarah’s ‘hen do’. But it is Evie that has Everest to climb. She has to figure out what she wants. Does she still want to be a screenwriter? Does she want to be an agent? Neither of these is possible if she stays with Monty. After a heinous break-up, she has remained single and unwilling and/or unable to go look for love. Is that the real reason she has proposed this preposterous plan to Ezra? Or is it that she gets to write again? Or Option E, all of the above?

As a quick bonus point, the author has a lovely turn of phrase which had me blowing the occasional snot bubble, or spurting tea out of my nose:

Beth’s arms were tightly folded. Her hair, which had been beautifully styled at the start of the day, was now expanding as it dried, like she’d been backcombed for a power ballad.

Scene: Evie and Graeme are standing in the rain waiting for the car to be repaired.

Which was when Graeme grabbed me by the shoulder and snogged me like his mouth was a plunger trying to unblock a drain.

This scene also gifted me with one of my favourite lines in the novel:

My response was pure reflex and entirely justifiable. Graeme jerked back.

“You bit me!” he said, astonished … “I was being romantic. You were the one going on about it being kissing weather!” …