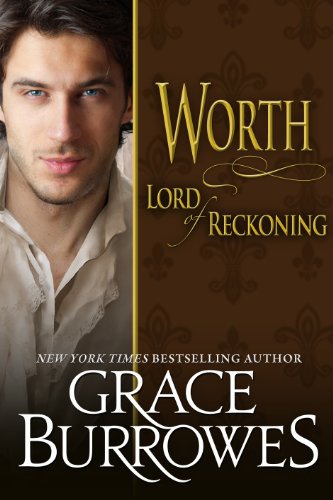 Worth: Lord of Reckoning

This RITA® Reader Challenge 2015 review was written by Phyllis Laatsch. This story was nominated for the RITA® in the Long Historical category.

Consummate man of business and rake at large, Worth Kettering repairs to his country estate to sort out his familial situation, trusting the ever efficient (though as yet unmet) housekeeper, Jacaranda Wyeth, will provide his family a pleasant summer retreat. To his surprise, his household is manage by a quick-witted, violet-eyed Amazon who’s his match in many regards.

As Jacaranda and Worth become enamored, the family she’s kept hidden from him, the financial clients Worth feels singularly protective of, and the ragged state of affairs between Worth and his estranged older brother, Hessian, all conspire to keep Worth and Jacaranda apart. Worth must choose between love and profit, and Jacaranda must decide between loyalty to her family and the love of a man who values her above all others.

This is my favorite of Burrowes’ books that I’ve read, not least because it doesn’t rely on my knowing twenty other family members and all their personality quirks. I’m a casual fan and have read only some of them and in a fairly scattershot order. I get confused and overwhelmed with the dozens of characters who pop up and put their oar in.

I liked the mirroring of Jacaranda’s and Worth’s pasts – both are mostly estranged from their families and for the same reasons. Not to get too spoilery, but each was disappointed in love because their families were stupid/mean.

They also each expect the other to be old and decrepit. I don’t know why no one has ever mentioned to Worth that his housekeeper is a hot, young woman, but you’d think that someone would have mentioned to her that the house’s owner was a young guy. It’s never quite clear how Jacaranda got the job in the first place. I can understand why, since she was running her brother’s household and got fed up and decided to get paid, but who gave her a letter of reference?

I think I felt the most for Worth’s teenage half-sister, whom he rescues from her boarding school, where the other girls (and the headmistress) were evil hags. Unfortunately, she and their niece (daughter of their dead sister) become plot moppets.

The story unrolled a bit slowly after the attraction which proceeded quickly to bed. I felt “Jack” (she hates being called that) kept her secrets a bit too long, which dragged the book into Big Misunderstanding territory.

I got confused about the ship that was thought to be lost at sea, but wasn’t, then it was, then it wasn’t. Sounded like insider trading to me, the way he bought back the shares of people who were convinced the boat had sunk.

Burrowes has done the secret hot housekeeper who’s really a lady trope before, but she does it really well here. Likewise, the surprise illegitimate sibling/child whom we love dearly. And young person goes missing so we all have to search for him/her. And all my brothers will threaten to beat you up. Burrowes reuses a lot of tropes, but she does it well.

Worth: Lord of Reckoning by Grace Burrowes