The SBTB crew were discussing a current manga sale going on at Comixology wherein the first volumes of many, many wonderful series are marked down to .99. If you listen to the podcast, you might have heard me talk about how, when my brain is tired, it doesn’t have the energy to do all the imaginary construction of the world and environment that usually happens when I read a book. And at times when my brain is tired (like now, hello and whoa damn) I find myself gravitating toward video games or manga or anime, because the visual is constructed for me while I’m still getting the enjoyment of being immersed in a story.

When discussing the current sale, Susan said, “My rec is going to be Witch Hat Atelier, btw, because if you liked Diana Wynne Jones books it is PERFECT.”

I didn’t know that I needed the words Witch Hat Atelier in my eyeballs, but apparently I did, because my whole brain was At. Attention.

Then I saw that not only was volume 1 on sale, but it was also part of Kindle Unlimited so off I went.

The set up is pretty easy to grasp, and rather familiar (ba dum-bum): Coco is a seamstress who works with her mother in a world where witches have magic, but one has to be born with magic to be a witch. Coco wishes she could be a witch, but has been told it’s impossible.

And it is impossible; the end.

A witch named Qifrey comes to her shop, then later intervenes and saves Coco’s life when she attempts magic on her own by copying from a mysterious book she’d been given years earlier. Good news: Coco can do magic. Bad news: that spell went hella wrong. Qifrey offers her a chance to learn more magic and try to fix what went wrong, and off she goes to his atelier, where three other students are learning magic, all of whom welcome Coco in different ways.

The charm of this story for me is partially in the familiarity of its structure and character, but mostly in the gorgeousness of the art, amid which moments of unexpected gravity landed on me with a thudding poignancy. I recognized so many of these characters and motifs. Coco is an enthusiastic, starry-eyed newbie in a magical world, overwhelmed and excited about everything. Her roommate is distrustful and resentful; the other students are odd in unique ways. Qifrey isn’t what he seems and he wears really interesting eyeglasses – even when I can identify how the story is working on me, it was still working. Charmed, I was, indeed.

But amid the familiarity were so many scenes that made me grin or laugh (remember to read right to left here).

For example, one of Coco’s new schoolmates is SO EXTRA: 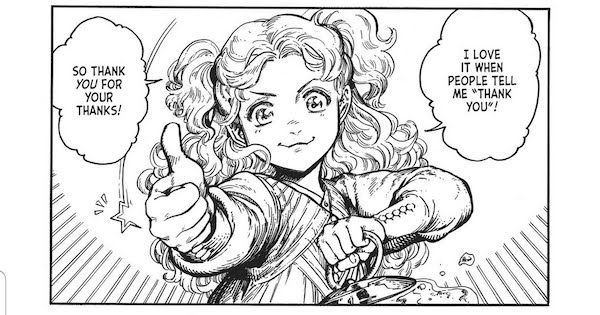 I just had a conversation with my son about learning styles (we are now homeschooling for the time being, and are all adjusting to online learning along with our entire school district) and how his learning methods are different from mine. This one panel echoed an entire debate we’d had: 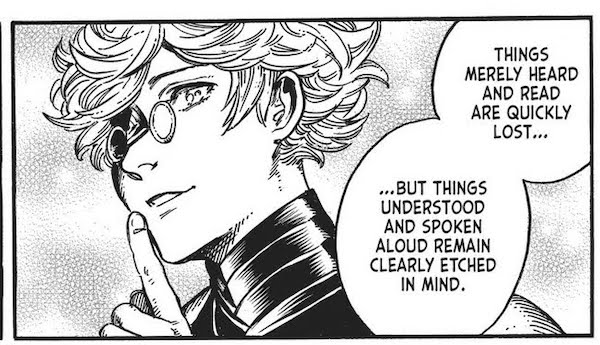 Yes, hi, hello, I wasn’t expected this level of casual poignancy or multiple meaning in this manga but sure, that’s pretty much what my heart looks like now. In this frame, Qifrey is discussing the removal of magic use from the general populace, but I read a lot more into this part:

This panel also hit me in my feels, all of them, every last one, which are already too close to the surface so ouch: 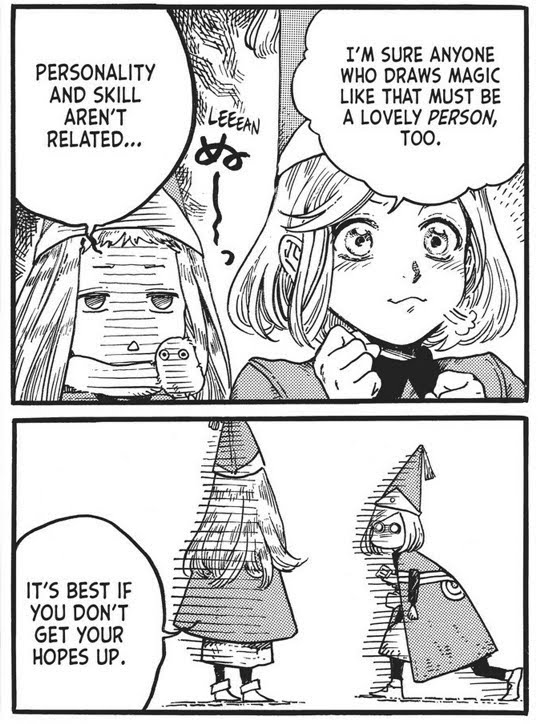 And my favorite moment: 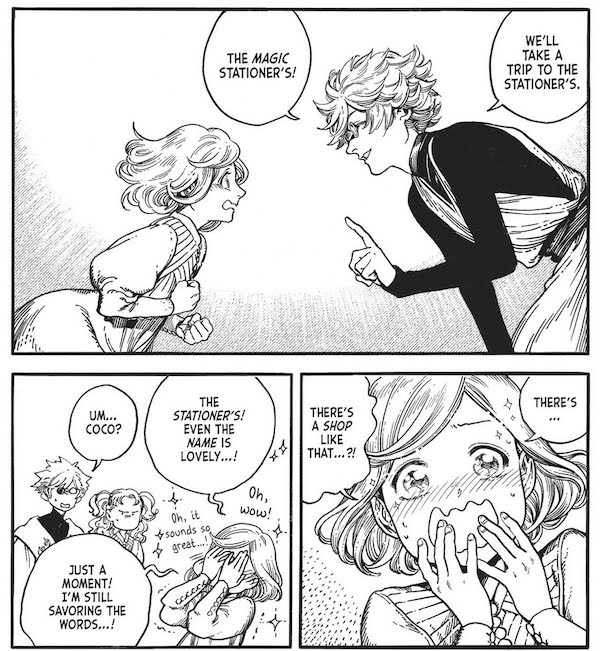 “The Magic Stationer’s” is another assembly of words that I didn’t know would completely transfix me with charming but like “Witch Hat Atelier,” they did.

“Just a moment! I’m still savoring” pretty much sums up my experience after volume one. I’m still savoring the images, the delight of Coco absolutely losing her cool every third page, the way the illustrations zoom out into wide panels that convey wonder and awe and discouragement and impossible hope. I didn’t realize how much I needed wonder, awe, and hope. The AV Club described this story as “Harry Potter meets Kiki’s Delivery Service,” and that’s about as on target as any attempt I might make. It was exactly what I needed, and made me feel so much better after reading it.

My library, which has a wonderful manga collection and is also closed, has all the volumes in print. Of course, I can’t get to them. I’m about to buy Volume 2 digitally, so it seems that the tempting sale that tempted me was super effective. Even if I can half-predict what happens, and even if at times the familiar tropes are glaring in their familiarity – Plucky Young Girl is Plucky and Chosen For Something Mysterious! Magic Happens! There’s a Magical Stationary Shop! Taciturn Deceitful Person is Taciturn and Deceitful! –  the illustrations make me weepy-gasp, and the reassurance that hope, determination, and ingenuity is deeply welcome. I’m entirely on board for more magic and charm.