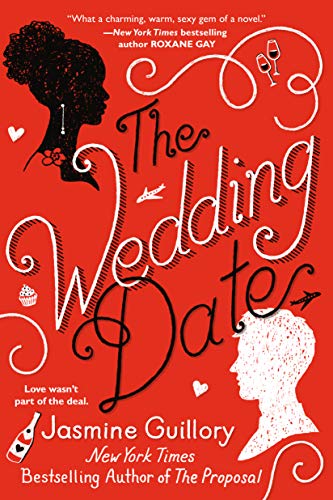 The Wedding Date  is charming and delightful, and it saved me from getting overly hysterical on a flight to Costa Rica. It’s not a perfect book, and I found myself giving the hero my “WTF” face a few times, but the awesomeness of the heroine thrilled me.

To give you some context, for me, flying is essentially a panic attack from take off to landing. I can take two Xanax to soften the impending misery, but if we hit turbulence I start to cry a little. Or throw up. It’s not great. Yet I was on a five hour flight, and The Wedding Date kept me distracted for most of it; it’s got some powerful charm.

The book opens with a meet cute. Alexa Monroe is headed to her sister’s hotel room to pregame a night out with some cheese, crackers, and champagne. She gets stuck in the hotel elevator with Drew Nichols, who is there for a wedding.

They sit down, share some cheese, and charm the hell out of each other. Drew is there to be a groomsman in the wedding of his ex-girlfriend and one of his best friends. Awkward. And he’s there without a date. Even more awkward. They discuss over brie and crackers:

“Oh, please, you’ll be fine. Weddings are a great place to meet people. It’s better that you’re without a date. As my friend Colleen always says, ‘Don’t bring a sandwich to a buffet.”

He let out a bark of laughter.

“I’m definitely going to steal that saying. And while in most situations I would say that your friend Colleen is totally right, this is that five percent of situations where a sandwich would save me from all the food poisoning in the buffet. I’m going to get so many pitying looks, you have no idea. And the worst part is that I RSVP’d with a plus-one, so there’s going to be an empty seat at the head table. And a lot of ‘What happened to your girlfriend, Drew, couldn’t make it?’ And I’m going to have to smile and take it, but there’s like a thirty percent possibility I’m going to have one too many glasses of bourbon and go rogue.”

She touched his hand and tried not to linger there.

“Okay, yes, sometimes a sandwich is a necessary security blanket. I’m sorry that yours bailed on you.”

Giddy with delightful flirtation, Alexa agrees to be Drew’s sandwich. That is, she agrees to pretend to be his girlfriend for the weekend of the wedding.

For the record, if I were trapped in an elevator with Chris Evans and he tried to convince me to be his sandwich at a wedding, I’d refuse because weddings are super awful, especially when you’re in them. There’s, like, a lot of people and a lot of talking. And a lot of talking to people you don’t know. And sitting around waiting for stuff when it’s not polite to pull out your Kindle because you should be talking to people you don’t know. I might do it for Tom Hiddleston but only because I have suspicions about his niceness, and I need to stay on his good side.

Anyway, Alexa is a better woman than me, and she goes to the wedding with Drew. The delightful flirting continues. Drew delays his flight back to LA so he can spend more time with Alexa. They really, really like each other.

But Drew is a pediatric surgeon in LA. Alexa is the Chief of Staff to the Mayor of Berkley, California. They are both really busy professionals dedicated to their careers–but they can’t stop thinking about each other.

So Alexa and Drew either have the BEST frequent flyer miles program ever or they spend a good amount of money and fly out to see each other every other weekend. This book is fairly light on conflict. To be honest a good portion of it was the progress of Drew and Alexa dating and slowly falling in love, but it was sweet and funny and felt like a very real depiction of two professionals in their thirties staring a relationship.  Also a lot of that dating involves really incredible food, so do not read while hungry. I want brie and crackers right now, damnit.

Probably the thing I loved most about this book was how Alexa loves and is devoted to her job, and that she’s allowed to be that way without criticism from any other character. So often I see the trope of professional women in contemporary romance “working too hard” and failing to fall in love because of it. That’s such bullshit. It is entirely possible to be a busy and dedicated professional and still have a fulfilling relationship. The idea that it’s not possible is centered only around women and it’s based on old misogynist cassette tapes that are still playing.

Also Alex and Drew actually work. This isn’t a book where the CEO/ small business owner/ FBI agent remarkably has a fuckton of free time to do other stuff. Alexa and Drew mostly meet on the weekends, and even then work comes up. Drew has to run off to an emergency (like a surgeon would). Alexa spends one of their nights together working on a project while Drew chills out on the couch next to her.

It’s such a realistic depiction of actual work life balance, and it was so heartening for me to read. I come home from work all the time only to have some problem at my office go ka-boom and derail all my plans, and there are plenty of nights when my husband and I have watched a movie while I’ve worked from my end of the couch.  There’s no shame in enjoying your work or in having to make room for it within your personal life.

Alexa also has a “work husband,” Theo, whom she bounces ideas and insecurities off of. I loved the depiction of a man and a woman in a professional relationship that, while deep, isn’t sexual or romantic. I also loved that Alexa had those insecurities in the first place. A lot of time I see powerful women presented as being in control and unaffected by doubt all of the time which is such bullshit. Basically this book made Work Elyse all the happy.

For a decent portion of the book we get Alexa and Drew trying to balance their careers, the distance between them, and the fact that they are an interracial couple. Alexa is Black and Drew is White. Alexa spends a lot of time with Drew’s friends who are 99.8% White, and it’s not always a comfortable situation. Like this asshole that she meets at a party:

“You live in Berkley? That’s cool. But I meant, like, where are you really from?”

Now she knew where this was going. Like she couldn’t “really” be from California? Why did people always try to ask her about her ethnicity in the clumsiest of all possible ways? Getting this question, especially this way, always made her feel like an object of curiosity. Today it made her feel like even more of an Other in this party full of golden-haired beauty queens.

Now she was doubly annoyed with Mr. Stands Too Close. So she was going to fuck with him.

“Oh, not that far from here. I grew up in Oakland. Northern California girl!” She gave him her biggest, fakest grin.

He chuckled and took another swig of his beer.

This conversation was so predictable. Yet this dance people did was irritating every time.

In this scene Drew shows up and The Asshole fucks off, but Drew isn’t aware of how different life is for a woman of color than it is for him except in a superficial way. There are scenes where Alexa has to explain to him how much his perceptions are steeped in privilege.

Alexa is trying to put together an arts program for at-risk youth, a program she’s deeply passionate about. With the dexterity of a Cirque de Soleil performer, Drew shoves his foot deeply into his mouth when he wonders why troubled kids should be rewarded with art classes. I wanted to smack him.  Alexa points out that as a White kid, and a man, Drew could do a lot of shit in his teenage years that was dismissed as boys being boys. A Black teenager would face harsher judgment, and be labeled much faster and more permanently as “delinquent.” Alexa is trying to change that narrative.

That’s not the only time Drew says something ignorant or unkind, which was part of the reason I was lukewarm on him. He has the occasional case of “speak first, think later.” My bigger issue was that Drew and Alexa’s conflict was centered around Drew not being able to commit and both of them refusing to label their relationship. The problem was that we are given no context for why Drew doesn’t commit, and not-talking combined with misunderstanding lead to the romantic crisis. All of that could have been avoided with an hour-long honest conversation.

That said, I adored Alexa so much, loved the depiction of her as a professional, loved her friends and coworkers (a heroine who doesn’t exist in a vacuum!) so much that it overcame much of my annoyance at the conflict (and at Drew). Add to that a really powerful exploration of Alexa’s troubled relationship with her sister, Olivia, and I was sold. The relationships between women in this book were strong and loving and kind, and I was so there for that.

And yeah, sometimes Drew was an idiot, but he was also charming enough that I didn’t want to throw him out the door. Throw something at his head, maybe, but I was still happy when he and Alexa made it work.

I really enjoyed The Wedding Date and I’m very much looking forward to seeing more from the author.

The Wedding Date by Jasmine Guillory