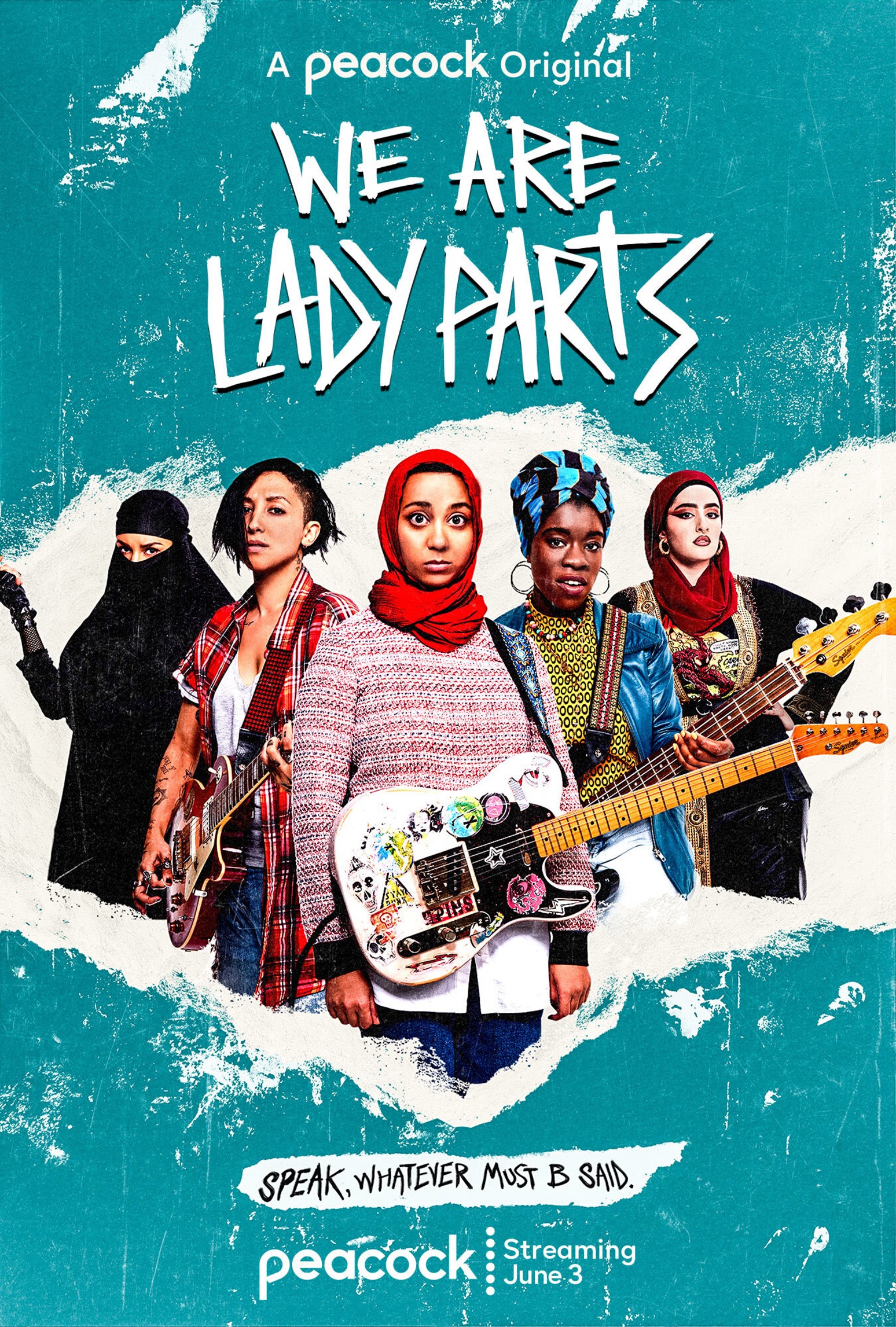 We Are Lady Parts

We Are Lady Parts is a British sit-com about an all-girl Muslim punk band, and it is glorious. It is sweet, empowering, and very, very funny with a diverse, female-led cast and some very clever writing. The series runs for six 25-minute episodes written and directed by Nida Manzoor, and we watched the whole thing in a single sitting, alternately cackling with laughter and hiding behind the sofa in an agony of vicarious embarrassment.

The story is narrated by Amina (Anjana Vasan), a PhD student in microbiology who just wants to find a nice husband. She’s the last person in her circle of friends who isn’t either engaged or married. When she meets a handsome man handing out flyers for a band that is seeking a guitarist, she goes to the address on the flyer, in the hope of tracking him down. Instead she finds Saira (Sarah Kameela Impey), Bisma (Faith Omole), Ayesha (Juliette Motamed) and Momtaz (Lucie Shorthouse) – the members of Lady Parts. And Saira recognises Amina as the girl from her school who used to play guitar, until her stage fright led to her vomiting during a performance.

Amina still plays the guitar, but she also still suffers from devastating stage fright, and has no desire whatsoever to perform in a band. But when it turns out that the handsome man with the flyers is Ahsan (Zaqi Ismail), Ayesha’s brother, Saira and Ayesha do not hesitate to offer him up for a date with Amina, if she will audition with them for a major recording opportunity.

I want to start with the things that I suspect may put people off, so that I can then talk you into watching this anyway. The title of the show is also the name of the band, a subversive and wry choice for a subversive group. Second, much of the humour, particularly in the early episodes, comes from terribly squirm-worthy social-awkwardness situations. I really was hiding my face in my hands for chunks of time. In fact, I wasn’t sure if I could handle more episodes after the first one. (Also, if you don’t deal well with nervous vomiting as a plot point, be warned, there are several instances of it here.)

And yet, it was also absolutely irresistible and once I’d watched the second episode there was no question that we were not going to stop watching until we were done. The story is in many ways a coming of age story for Amina: she is figuring out who she is and what she wants in life, and finally giving herself permission to go after it. But it isn’t just her story, either. While I wouldn’t precisely describe this as an ensemble cast, the other women in the band are very well-realised, and Saira’s story arc is nearly as central as Amina’s.

One very delightful thing that this sitcom does is put us inside Amina’s head using music and retro film clips. When she plays her guitar in her wardrobe, the lighting changes, the wardrobe grows, and sock puppets appear and act as her backing singers. She imagines her romance with Ahsan and we see it as a black and white movie. He asks her on a date and she falls backwards as if dead while roses sprout from her chest. It’s all very over the top, and so much fun.

(Yes, there is romance in this sitcom! Amina gets a delightfully awkward but ultimately very sweet romantic storyline, and Saira gets a rather more realistic, hard-edged and unconventional one. But they both get to be happy and adorable at the end.)

Also – and I never thought I’d say this, because punk rock is very much not my genre – I loved the songs. In any episode, as soon as the band started playing and singing, I was just so happy. Their covers of Nine to Five and We Are the Champions were amazing, but their originals – which included the glorious Voldemort under my Headscarf – were even better.

(Honestly, if the UK would just send Lady Parts to Eurovision, they might get more than 0 points… Australia would 100% vote for that.)

One thing I loved was the way this story explored religion and culture without making judgments. In terms of appearance and dress, Amina wears hijab and dresses in pastels and loose clothing and her friends outside of the band are slightly more conservative in their dress than she is. Within the band, Saira is tattooed and wears no scarf; Bisma and Ayesha wear different but very glamorous and vibrant variants on hijab, and Momtaz, the band manager, wears niqab. They pray together and rock out together and write subversive songs, and I loved them so much.

Much of the tension in the story comes from the different directions Amina is being pulled in, and trying to find a path forward in her own religious practice. Her circle of friends outside the band, in particular her best friend Noor (Aiysha Hart), are quite conservative in their religious practice; for example, at Noor’s engagement party, men and women are separated from each other by a curtain, and while Aiysha is mildly surprised by this, it is treated neutrally and normally.

Less neutral is the tendency of Aiysha’s friends to police ‘modest’ behaviour and gender roles. Amina’s best friend, Noor chides Amina for considering wearing a red hijab on a date, saying she would be “advertising her shame.” – a joke that is clearly not really a joke. While Amina’s friends do not view all music as haram, playing punk music is certainly not something Amina can reveal to them. (Fortunately, because this is a sitcom, they obviously never find about about it…oh, no, wait….)

Meanwhile, the members of the band, while religiously observant (there’s a montage of them praying together and then rocking out together) are definitely not about traditional gender roles. They are assertive and bold, angry and subversive. Ayesha is queer, drives an Uber and takes no shit from anyone. Saira works out her aggressions at the halal butcher shop where she works, and her relationship is quite consciously not headed for marriage (and I adored the way this was resolved in the end). Bisma writes and illustrates a comic called Period (Apocalypse Vag). Momtaz swears like a trouper, and headbangs to the band’s music. And the narrative makes it very clear that these are all perfectly acceptable ways to be Muslim.

It wasn’t all sweetness and punk music, of course. Amina and her friends have to deal with some fairly predictable misogyny (including the internalised variety) and Islamophobia at various points in the story. And Amina’s relationship with Noor is quite painful in some ways, though I felt that it landed somewhere positive in the end.

I would also note that there were relatively few surprises in this story. I kind of saw each beat coming. This didn’t bother me, but if you are someone who wants to be surprised by a story, you should know that this is not a story where this happens.

I really loved We Are Lady Parts. It’s subversive, funny, and unashamed. There is so much love and compassion and understanding underlying the humour, and the final scenes had me both laughing and crying. I loved seeing Amina grow into herself, and I loved the strong, uplifting female friendships that helped her to get there. And it was such a joy to watch a story that was created by women of colour and that had women of colour front and centre.

Don't you want to go on a road trip with these women?

Editor’s note: We Are Lady Parts is available streaming on All 4 (UK), Stan (Australia), Sky New Zealand, Peacock (NBC’s streaming app, yes, another one) in the US as of 3 June, and Showcase in Canada on 9 June.