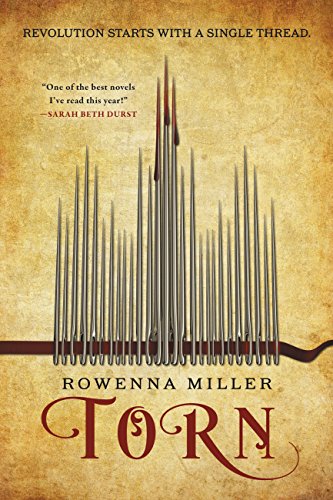 Torn has a great concept and fantastic descriptions of locations and clothing. It has a heroine of color (she’s described as having black hair and “golden skin”). It has intrigue. It has action and romance. Alas, it does NOT have momentum.

This book is a fantasy that takes place in an alternate world. The country our heroine Sophie lives in is similar to Russia right before the 1917 revolution. Sophie is a seamstress who owns her own shop. In addition to being gifted at design and sewing, Sophie has the ability to sew charms into the fabric, making her work quite sought after. Magic in this world appears to be limited to these fairly low-level charms, and is associated with arts (one can play or sing a charm) and “women’s work” like sewing or beading.

Sophie lives in Galitha. However, her parents were immigrants from Pellia. There are many Pellians in Galitha and they are looked down upon as backward. Sophie is Pellian in her appearance but constantly reminds people that she was born and raised in Galitha. Her efforts to distance herself from her Pellian roots form one of the sub-plots of the story.

Sophie’s brother, Kristos, is part of a group that wants to rebel against the nobles. Sophie has been taking care of her brother since their parents died. Even though both Sophie and Kristos are now adults, she’s still protective of him and wants him to keep out of trouble. Sophie is also in a difficult position because her livelihood depends on her having the goodwill of the nobility, for whom she designs and sews dresses. When Lady Viola invites Sophie to attend her salons, Sophie makes friends among the nobility and falls in love with a prince. However, she also has a chance to see just how glaring the gap between rich and poor is, and how little the nobility understands about the suffering of the lower classes.

There’s so much to get excited about here but unfortunately the book is 436 pages of Sophie trying as hard as she can to not do anything. She can’t pick a side, she won’t listen to or respect her brother, and she knows she can’t marry the prince who is in love with her so their dalliances feel temporary and meaningless. The level of description is the book is great, and I have to admit that I enjoyed the scenes set in the salons with all those beautiful clothes more than the scenes set in pubs, which I could practically smell. However, for most of the book, nothing happens – or rather, things happen around Sophie, but she remains motionless, wringing her hands. By the time she finally takes some action I wasn’t interested anymore.