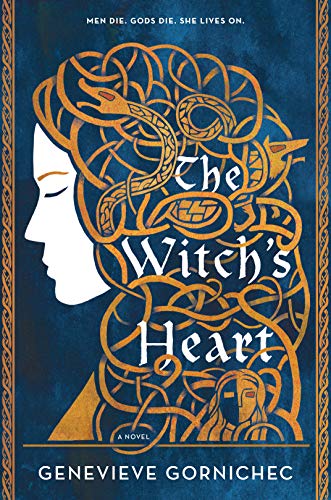 The Witch’s Heart is intense and magical. It is NOT a romance novel, although there are love stories in it. It is loosely based on Norse mythology. Since I know almost nothing about Norse mythology this book was full of surprises for me. Fans of Norse mythology might not get the same sense of surprise, but I think they will share my enjoyment of the rich world and characters.

We begin with the story of Gullveig, a witch who teaches the art of seeing the future to both the Aesir (Odin and other Gods) and the Vanir (a rival race of gods). When Odin learns that Gullveig is telling these secrets to both sides, he has her burned to death three times. Each time she is reborn, and the last time she escapes, but leaves her heart behind in the ashes

The witch flees to the Ironwood where she takes shelter in a cave and adopts the name Angrboda. Here she is discovered by Loki, who returns her heart to her. Loki comes and goes through the seasons, popping in periodically for some witty banter, and now that she has a heart Angrboda can’t help but fall in love with him. They have three unusual children together. Despite Loki’s lengthy and frequent absences and some unique parenting challenges Angrboda is fairly happy with the children and visits from her neighbors, Skadi and Gerd. But when the Gods (not to mention Loki’s other wife) hear of the children, they take a terrible revenge, and Angrboda, desperate to save her children, must decide whether to try to prevent the disaster she sees in visions or let it occur.

This is a harrowing book which includes violence towards women (but not sexual violence), animals, and children. It is a tragic book in which almost all of the romances and other relationships are doomed. And yet it is also a profoundly optimistic book, in which crimes are (eventually) forgiven, enemies become friends, a friend becomes a lover, and generations of violence and trauma have the opportunity to start over in a happier light. I did not feel depressed by this book, although I was often worried about the characters and felt sad and angry on their behalf. I felt inspired by the beautiful writing and the main character’s resilience, and touched by the evolution of the various relationships, and warmed by the hope implied in the final pages.

The characters in the book are fascinating, and several  go through intense and interesting arcs. Almost all of the main characters are women and their relationships are complex and powerful. Angrboda is wounded, resilient, smart, prickly, funny, and tough and ruthless – I instantly bonded with her. I admired her hard edges and her capacity for the kind of tough and clear-sighted love that holds up to adversity. I especially loved her sharp, acerbic sense of humor and her conversations and banter with Loki:

“I can’t believe,” he went on, “that you would besmirch my good name by implying that I’m an oath-breaker-”

“I would have to know your name in order to besmirch it, would I not?”

“You’re besmirching the idea of my good name.”

“The idea of your name itself, or the idea that it’s a good name?”

He blinked at her and mouthed the word Oh.

The book has a lot of commentary on the roles of women, the effects of power, and the effects of disenfranchisement. Instead of Viking battles, what we see is the work of survival – cooking, hunting and trapping, some gardening, trading, spellcraft, childrearing, and nailbinding (a kind of knitting). When there is a fight scene, it is vivid and suspenseful. The book also deals with LGBTQIA relationships in a positive manner and it places friendships between women front and center.

While I want to warn readers that violent and sad things occur, this was one of the most seamless, absorbing books I’ve read in a very long time. I loved the characters, the plot, and the writing. I love books that encourage me to learn about a new thing, and this one spurred me to seek out more Norse mythology. I especially loved that the protagonist is essentially a side character in Norse mythology who is reclaimed and given center stage in this book. More well-known figures such as Loki, Thor, Freya, and Odin are merely satellites to her planet.

Personally, I loved this take on Norse mythology. Because I knew so little heading in, I was constantly surprised – sometimes delighted by a surprising event and sometimes heartbroken. The sense of place and real physical needs of the characters created a grounded, beautiful world, which made the more fantastical elements of the story feel all the more realistic. The prose was stunning and the protagonist someone I wanted to spend all my time with. This was a perfect read for a cold, rainy January. I will enjoy re-reading this book for years to come.

The Witch’s Heart by Genevieve Gornichec