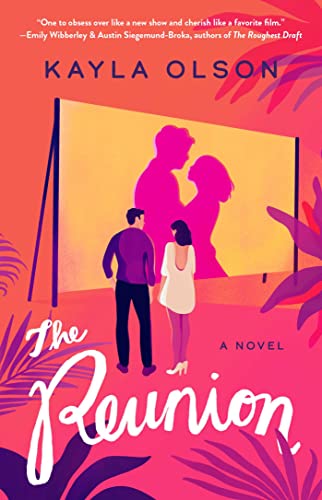 I love, love celebrity romance, so it was an extra bummer that The Reunion fell so flat to me. I would go so far as to say it doesn’t even really qualify as a romance. It’s more of a book about the heroine’s journey to navigate her second act in Hollywood with some strong romantic elements. Even then, the emphasis on physical details and not emotional ones, plus a stereotypical “villain” made for a tough read.

Liv Latimer was once the teen star of Girl on the Verge, a wildly successful show. Twenty years later, there is going to be a reunion show and there are talks of a reboot as well.

While shooting GotV Liv developed feelings for her costar Ransom Joel (yes, that is the character’s name). Even though their characters got together in the series, Liv was never quite sure how Ransom felt about her. Now with the reunion special coming up, Liv is questioning if Ransom was the one that got away.

Here’s the thing: we don’t find out exactly what transpired between Ransom and Liv to make her question if he reciprocated her feelings until chapter four. Even then, a single conversation would have fixed things entirely.

In fact, there’s a lack of conversation in this book in general. Liv and Ransom communicate more via text than in person conversation. Because this is a first person POV book, the reader never gets inside Ransom’s head either.

Now I’ve read plenty of first person POV books where we don’t get inside the hero’s head, and it’s not necessarily an issue, provided there are other hints to the reader as to what he’s thinking and feeling.

Ransom remains an enigma through almost the entire book. We don’t get many clues as to what his feelings for Liv are until much later in the story. As a result, the first two thirds of The Reunion are mostly Liv coordinating with her agent, publicist and personal assistant, and going through the promotional hoops associated with the reboot. Ransom could almost be a secondary character. When Ransom and Liv do talk in person, it’s very innocuous, almost small-talk. It doesn’t make for great romantic tension.

What makes this more frustrating is that we get tons of detail regarding what people are wearing (down the brands) and eating (two scrambled eggs, one yolk). It felt a lot like a scene was being painted for me, but the actual characters are cutouts.

In addition to wondering if Ransom has feelings for her after all these years, Liv is also trying to navigate her career. Her father died while she was filming GotV and the media attention around his death felt predatory. Liv has mostly done indie work since then, but a reboot would put her squarely in the paparazzi’s spotlight again.

The reason I didn’t abandon this book is that enough attention is given to Liv trying to negotiate what her craft and celebrity mean to her that you could argue that it’s the central focus of the book, with a subplot regarding Ransom. That romance subplot only really becomes a focus in the last quarter of the book. That’s not really how the book is being marketed, though, and I think readers expecting a contemporary romance will be disappointed.

I think The Reunion might have been a different book had we gotten Ransom’s POV, but as it stands, it’s an okay story about an actress rebooting her career, but certainly not the romance I was expecting.

The Reunion by Kayla Olson