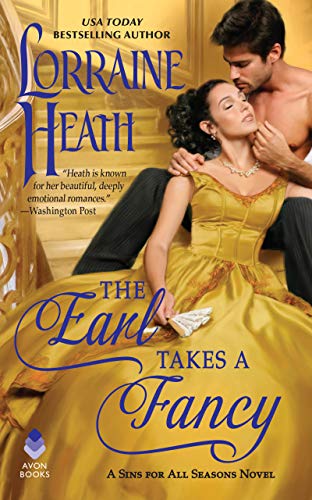 The Earl Takes a Fancy

The Earl Takes a Fancy is, at most, one half of a sort of OK book – the half that belongs to the protagonist, Fancy Trewlove. The other half of the book belongs to Matthew Sommersby, Earl of Rosemont, and tragically, he is garbage. For a romance to work, I must have some attachment to both characters and want them to be together, and in this book, such is not the case.

This book is part of the Sins for All Seasons series. I felt it worked as a stand alone. It makes the bold choice (more on this later) to center around a woman named Ettie who was a baby farmer and became the adoptive mother to four children and birth mother to Fancy. Ettie was a great mom and each of the children (now adults) is the hero or heroine of a romance in the series. Ettie’s big dream is for Fancy to marry nobility. This seems unlikely to me but the other siblings also seem to be marrying into nobility, so…OK then. And as I mentioned, I want to address the baby farming thing at the end of this review, with TW/CW regarding that section.

As an adult, Fancy runs a bookstore and teaches both children and adults to read while she prepares to break into society and land an aristocrat. She wants to marry for love but her spouse has to have a title or Fancy will disappoint her mother and siblings, who have worked so hard for her education and general betterment.

Everything about the bookstore and adult literacy was compelling, full of fun side characters and details. I would have loved to have read more about the bookstore and all I wanted was for Fancy to keep running it forever. Fancy herself has no flaws, and a character with no flaws is not a fully developed character. However, Fancy and I are both so fond of books and cats, and are both so passionate about literacy, that I liked her even as I recognized the flawed characterization of her flawlessness.

Fancy meets her neighbor, Matthew, who is living in disguise as a regular guy. As you’ll recall, Fancy can’t marry him because she doesn’t want to disappoint her mom. They become friends while she continues to try to find an aristocrat to marry. They have a good chemistry and a pleasant friendship, but instead of being charmed by the friendship I was, how can I put this…grossed out. Matthew is lying to Fancy by omission every day, so the friendship feels false and any sexy times like a violation. I enjoyed all the scenes in which Fancy and Matthew take in the sights of London (they are fun, interesting, and well-written in terms of scene), but he was still consistently lying to her, which for me spoiled any charm they had together as his deceit continued.

Matthew is incognito because his now-deceased wife “trapped” him into marriage (she invited him to make out with her in the garden, he consented, and had to marry her when her father showed up, having clearly been told ahead of time about the tryst) and now he thinks all women are manipulative liars who trap men with their evil ways. Right before she died, the dearly departed wife published a letter in which she said that Matthew had been a great husband who she adored and that she wanted him to marry a deserving woman. Since then Matthew has been besieged by offers so he’s in hiding. Matthew is baffled as to why his wife wrote the letter in the first place, and indeed this is never explained, which is so frustrating since it would have told us so much about the wife.

Basically, this book has a character with no flaws at all (Fancy) whom I can forgive for being perfect because we both love books, but still, a perfect character does not a layered character make. Then we have a sexist, deceptive man pretending to be a nice guy. Matthew is not a nice guy. He blames his first wife for “trapping” him without taking any responsibility for his own actions. He goes on to blame all women for the actions of the one with no comprehension of the realities women face or the roles men play in these situations. He breaks Fancy’s trust every single day. He lashes out at Fancy viciously when he assumes that she has tried to trap another character (the situation was actually reversed).

There’s no redemption arc for Matthew, which leads me to believe that I am supposed to feel that his attitude towards women is understandable based on his wife’s actions, which makes no sense on many levels. He gives a lukewarm apology while Fancy insists that because of her own scandal (her birth and another scandal side plot) she doesn’t deserve him.

This book has great clothes and a great bookstore and a lovely theme of found family with Fancy and her protective siblings. But sadly it also has one character who is too perfect and another who is awful but supposed to be sympathetic (he’s not). The conflicts are manufactured and the happy ending dubious. I was so disappointed.

A word about baby farming and why it is a very strange launching point for a romance series.

In the 1800s if you had a child you could not or did not want to keep, you could sell it to a baby farmer for a lump sum (essentially, an adoptive arrangement), or hire the baby farmer to raise the baby on a pay-by-the-month basis. Wet-nursing for gentry was a more respectable and common version of this practice. The term “baby-farming” had well-earned connotations of neglect.

Sadly, in most cases, baby farming was notorious for murder and neglect, with many baby farmers either murdering their charges or allowing them to die of neglect so that they could reduce expenses and maximize profit. The practice was so common that in Scandinavia they were called “angel makers.” For more info, check out wikipedia, which has a long article on baby farming plus entries about many women who were convicted of killing their charges, including Amelia Dyer who is thought to be the most prolific serial killer in history.

I’m sure there were some women like Ettie who took in babies out of the goodness of their hearts and struggled to raise them long after the money ran out. But my knowledge of the larger issues of baby farming made it difficult for me to accept this practice as the foundation of a romance series, as I was too aware of the awful outcome for most children sold to baby farmers.

The Earl Takes a Fancy by Lorraine Heath