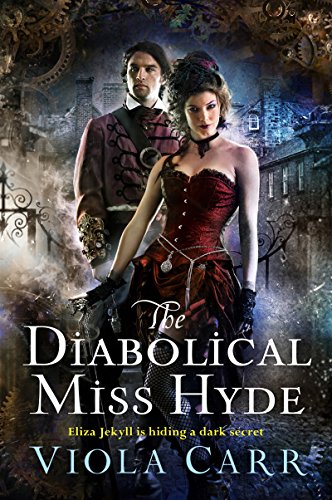 I recently started reading steampunk, and I’m so glad I did because I found The Diabolical Miss Hyde by Viola Carr. This book is part steampunk, part fantasy, part romance and part mystery, but all of it is delicious.

The titular character is the daughter of the famous and now deceased Henry Jekyll. Like her father, Eliza Jekyll harbors a secret shadow-self, Lizzie Hyde. Eliza is proper and straight laced, a doctor who tends to the mad at Bethlem (Bedlam)  and who helps the police solve murders using forensic analysis. Every day Eliza struggles to silence Lizzie’s voice inside of her, but when it’s too much, she takes her elixir and transforms.

When Eliza transforms into Lizzie, her body changes dramatically as well. While Lizzie seems ever-present in Eliza’s mind when Eliza is in control, Eliza struggles to remember Lizzie’s actions.

The book opens with Eliza solving a gruesome murder (and parts of this book are gruesome, to be sure). A maniac nicknamed The Chopper is murdering young women in London and absconding with their body parts. As she works to catch the killer, she’s hampered by a watchdog, Captain Lafayette of the Royal Society.

In Carr’s clockwork Victorian world, magic and sorcery are strictly outlawed. Anyone found dabbling in them is tortured and burned at the stake. Eliza’s father hid the sorcerous nature of his research, and like him, Eliza has to hide to the magical nature of her transformation.  Lafayette is handsome and charming, and Eliza is certain he uses his flirtatious interest in her to hide his suspicions. Her every step is dogged by shadows–the shadow of Lizzie, the shadow of Lafayette’s Royal Society, and the shadow of the killer she seeks.

There is so much going on in this book that’s hard for me to do it justice in a summary, to be honest.

I loved this book for a bevy of reasons, the first being how richly imagined Carr’s world is. I’m the worst kind of fantasy reader–I demand rich world-building and an immersive experience, but I don’t have the patience for a lot of info-dump or exposition. I think that’s why I’m finding I like steampunk–in a lot of ways the stage is already set for me, so I’m only waiting for each individual author to deliver the nuance of her world rather than start from scratch.

Carr’s steampunk London is different from other books I’ve read though. It’s layered and full of magic and darkness. Eliza’s world is what you expect, a clockwork London with gadgets, goggles, and Eliza’s pet computer, Hippocrates. Beneath that, though, is Lizzie’s world, the rookeries and slums, filled with magical creatures hiding from the daylight and the Royal Society. Her world made me think of something Tim Burton and Jim Henson would have come up with after spending a night drinking absinthe.  The bizarre is always flickering around the edges of your vision–a tavern wench with a rat-tail poking out from under her skirt, a bartender whose ears are mysteriously pointed, magical freaks who hide in plain sight.

Carr also leaves Easter Eggs, other famous monsters, mentioned in passing SPOILERS. A woman named Lucy in Bethlem screams madly for human blood. The notes of a German doctor are found, hypothesizing about using electricity to reanimate the dead. One character seems to be a Sweeney Todd reference.

I’ve always enjoyed books that portray a grittier, darker side of history, maybe just because I’m suffering from Duke Overload Syndrome. I like historical mysteries and historical romances that feature the rookeries, and characters who come from hard-scrabble backgrounds.

That grittiness is here in abundance. While Eliza tries to keep her skirts out of the muck, Lizzie embraces it. The beauty of the narrative is that both women are necessary to solve the mystery of the Chopper and resolve their issues with the Royal Society. Both characters are absolutely essential to the plot. When I first picked up the book, I assumed Eliza’s transformation into Lizzie would be the driving force behind the conflict, not the resolution, and I was happy to be wrong because it made the book so much richer.

Carr also does a great job giving Eliza and Lizzie distinctive voices. Eliza’s thoughts are presented in 3rd person, past tense POV. Lizzie speaks in the first person, present tense. Normally that grates on my nerves, but here it worked well. Lizzie lives only in the present, driven by impulse, so it made sense that her thoughts are presented to the reader that way. And Lizzie breaks the fourth wall, talking directly to the reader at times:

It’s mid-morning–I’ve spent a fitful night in here, let me tell you, trapped in my bleak nightmare of chains–and the watery sun’s already blotted out the city’s pall of filth. Here in the slums, where the weird lurks, the gutters run with shit and the air chokes me, thick with cholera and black lung and the forbidden stink of spellwork. Rats the size of tomcats snigger glint-eyed in the shadows, coveting that tasty corpse. The rotting alley walls lurch inwards, threatening to crush us all.

And here’s Eliza, examining the dead meat for evidence. Sweet Eliza, so desperately middle class in those drab dove-gray skirts, with her police doctor’s satchel over her shoulder. She’s a picture, ain’t she? Gaffing around with her gadgets and her colored alchemy phials, those wire rimmed spectacles pinched on her nose. Her shiny brass goggles, with their electro-spectrical this and telescopic that and ion-charged the other, perched on the brim of her tiny hat. Her little clockwork pet scuttles beside her, four spindly brass legs splashed with muck.

Here’s Eliza. And here’s me, the canker in her rose. The restless shadow in her heart.

The only reason I didn’t give this book an A+ is that there was much going on here (more than I could list in a summary), was that I sometimes lost sight of where I was going. There was the main mystery of the Chopper, which actually interested me far less than other mysterious elements and going’s-on that appear later.

There’s also the attraction between Captain Lafayette and Eliza and Lizzie, which was a delicious little subplot. There was the Royal Society sniffing around Eliza/Lizzie, and the mystery of Eliza’s shadowy, unseen guardian. Sometimes I wasn’t sure that Carr was balancing all these plot lines well and I found myself going “Oh, yeah, we’re looking for a guy who chops off legs… forgot about that.”

I didn’t really mind too much though, because I was having too much fun being carried along by the story and it all comes together in the end. The Diabolical Miss Hyde is a big, juicy steampunk/fantasy/romance/mystery package of fun, and I highly recommend it.