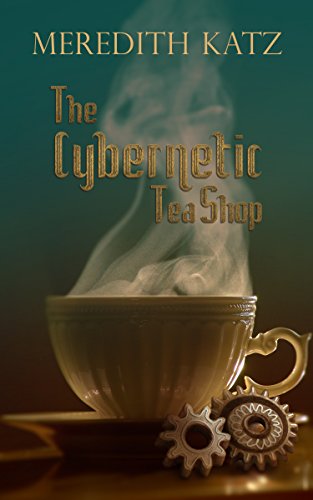 I am a simple human. I like robots. I like tea. I like reading about people falling in love, especially if they’re gay. So when I heard there was an f/f romance about a robot that runs a tea shop, I one-clicked so hard Jeff Bezos got a bruise.

The Cybernetic Tea Shop is a novella set in future-ish Seattle. The year is never specified, but it’s mentioned that AI was invented 300 years ago, so the intended timeframe is probably the 2300s. That was hard for me to buy, though, since the only futuristic element in the story was the robots. Everything else felt very early-21st-century: the characters wear jeans, travel on trains, and communicate by email. Overall, although the story has speculative elements and a nominally futuristic setting, it’s light on world-building and reads more like contemporary romance than sci-fi.

The story is on the sweet side rather than sexy or suspenseful, but it does deal a lot with themes of grief and prejudice. Sal, the robot heroine, is one of the few remaining autonomous AIs in existence, and as a result she faces discrimination including threats of violence. She also struggles with the grief that comes with being functionally immortal and watching people she loves die.

Clara, the human heroine, repairs Raises, the much more limited AI helpers that have replaced robots. She doesn’t like to stay in one place long, and her repair skills make it easy for her to find work whenever she wants to pack up and move. At the beginning of the book, she quits her job and relocates herself and her snarky hummingbird Raise, Joanie, to Seattle.

Sal has been running the titular Cybernetic Tea Shop in the same building for over two hundred years. She’s struggling, but hoping to keep the shop open for at least three hundred. That was the last wish of her original owner, Karinne, who is long dead but who Sal still loves and misses. Sal’s programming is literally written to never allow the memories of Karinne to fade.

Clara wanders into the shop for lunch and is fascinated to meet a true robot. After a rocky start, she and Sal become friends. The shop is damaged, and the two fall in love as they work together to repair it — and to repair Sal, whose components are wearing down without access to replacements. They must then decide whether they can build a future together, given that Clara is a wanderer and Sal has gone decades without so much as crossing the street.

When I read this book, it was evident within a few pages that Katz is one of the increasing number of authors who got their start in fanfiction. To be clear, that’s not in any way an insult! I read and write fanfic myself, and anyone who wants to talk down about transformative fanworks can meet me in the alley.

That said, I’ve noticed that new authors tend to do some particular things when they first make the switch from fanfiction to what I shall, for the sake of argument, call original fiction. (For my rant about why no fiction is actually original, you can also meet me outside, but like, in the garden. Bring tea and budget about twenty minutes.)

The first thing that ex-fic writers have in common is a generally slower pace. The entire first chapter of The Cybernetic Tea Shop describes Clara waking up, eating breakfast, going to work, and deciding to move. Long passages about everyday activities are a fanfic staple, but they don’t work as well in a standalone story. That’s particularly true in a novella, where story space is limited and it’s already hard to build a convincing relationship arc. By the end of this section, I was bored and wondering why I should even care where Clara decided to go.

Then Sal came on the page, and I was hooked. Maybe it’s my personal bias toward AIs, but I loved being inside her head. She’s thoughtful and empathetic, but also very stuck. Her life is an endless round of making tea she can’t drink for people who treat her like a toy, and longing for the past. (There’s a bit at the beginning about broken teacups as a metaphor for lost time that gave me a lot of Feels™.) Her anxiety and isolation were more relatable for me than the carefree Clara, and I was rooting for her to find her way to something better.

Sal’s internal struggle is a great example of the second thing about fanfic authors: they tend to structure their stories around internal rather than external conflict. On the surface, that might not seem to be the case here, since there is a clear external conflict between Sal and the robot-hating people who

Show Spoiler
vandalize and ultimately burn down her shop.

However, when you look at how much page room is given to that vs. Sal adjusting to change and healing from her grief over Karinne, it’s clear that the heart of the story is the personal element. Clara and Sal don’t spend their time fighting outside forces; they spend it talking about their feelings.

Now personally, I like character-driven stories over plot-driven ones any day. That’s why I read both romance and fanfiction. But when you put slow pace and internal conflict together, you tend to end up with the third ex-fanfic problem: a lack of narrative tension.

A major difference — maybe the major difference — between fanfiction and original fiction is how they generate tension. In other words, how do they keep us reading? In an original story, you’re meant to be hooked by the interplay between a protagonist who has a goal, and an antagonist that prevents them from reaching it. This works exactly as far as the author can convince us to care about whether the characters get what they want, so their challenge is to engage the reader emotionally in the struggle.

In fanfic, on the other hand, we’re already emotionally engaged. That job was done by the original story. So, narrative tension in a transformative work comes from the interplay between the characters we already love and the new story the author is telling with them. The question isn’t “OMG what’s going to happen?” but “OMG what if things were different?” Look, they’re in a coffee shop! One of them is a cat! Oh my god, they were roommates!

When you look at it that way, it becomes clear why it’s challenging to make the jump from one to the other. Fanfic often doesn’t have a ‘plot’ in the same way original narratives do, because the premise is the plot. I would read the absolute hell out of a fanfic where Draco Malfoy is an android that needs repairs and Harry Potter is a robot mechanic. (Seriously, does that exist? If so, please rec it in the comments.) You could give me 2,000 words of Harry eating breakfast and I wouldn’t care.

For original fiction, however, that doesn’t work. We need something to grab onto. We need stakes. Sadly, The Cybernetic Tea Shop was pretty light in the stakes department. The premise and my love for Sal almost carried it, but not quite; I wanted just a bit more weight behind the characters’ choices.

New author rough patches aside, this story was very sweet. I loved the characters’ dynamic of consideration and respect. Clara is concerned and careful to make sure that she’s treating Sal like a person, not an object, even when she’s literally reprogramming her. Meanwhile, Sal has a quick but believable journey from being stuck in the past to looking towards the future.

I also really enjoyed the fact that this story presents a healthy, romantic, explicitly asexual relationship. Sal is not built for sex and Clara is not interested in it, and that’s that about that. At no point is it treated as a problem, or even as a big deal. They spend more time discussing tea than talking about sex. (Which, you know, mood.) Positive ace representation can be tough to find, so if that’s something you’ve been looking for, definitely check this one out!

All in all, I’d say The Cybernetic Tea Shop is a nice short read for fall. It won’t fill your need for substantial fiction, but it might satisfy your sweet tooth. Fair warning: For best results, you’re going to want a cozy sweater, some rain outside the window, and a great big mug of tea.