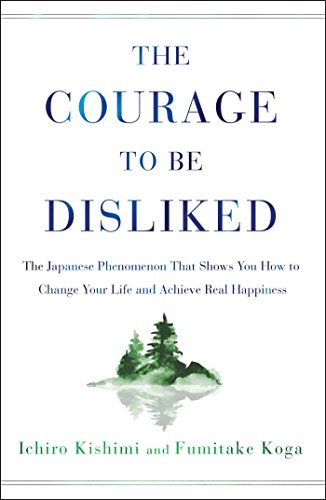 The Courage to Be Disliked

This is a very odd book that I have read one or two chapters at a time, and then told people about, usually starting with, “Can I tell you about this weird-ass book I’m reading that I can’t stop thinking about?”

The format follows a dialogue between a student and a philosopher, a follower of the Adlerian theory of psychology. While the subtitle reads, “The Japanese Phenomenon That Shows You How to Change Your Life and Achieve Real Happiness,” the phenomenon itself isn’t Japanese. Alfred Adler was a German contemporary of Freud. So that was a little weird.

Usually the chapters begin with a discussion of a concept, then the student gets all pissed off and comes back in the next chapter to challenge the concept before moving on. I would find this style of writing irritating except that sometimes, the student’s “WTF” reaction echoed some of my own, so I kept going. The dialogue can be a little stilted and strange, but skimming ahead when it got awkward helped a lot.

I’ve highlighted and re-read several sections because there’s a solid thread of, “Wait, what?” in my reactions. The parts I find most interesting include the idea that all problems stem from interpersonal problems (i.e. our relationships with other people) and that true freedom is found in having the courage to be disliked. In other words, if a person dislikes me because I am making choices for myself that are in alignment with my own personal goals, that dislike does not matter and I don’t need to be concerned with it. Any other person’s dislike of me or of my choices isn’t my problem; that is their task to deal with, and not my own. (The concept of tasks, and invading someone else’s tasks and responsibilities, is a big theme, too.)

The specifics of those choices, however, aren’t really addressed, and the lack of practical examples can lean the book towards a more esoteric series of platitudes, the type you’d find in an Instagram post atop a fuzzy-focused photo of a pier with some flip flops. And there’s room for me to question the idea of disregarding all opinions about my actions. For example, if someone dislikes me because I’m behaving like a raging bigot, I do need to take that dislike into account, and take responsibility for that behavior as it’s harmful to others, especially if a personal goal for my life is to not be a raging bigot.

That said, there are so many highlights in my copy. The conundrum of most human problems is that, if I’m reading correctly, we’d have no problems if we didn’t interact with other people, but we cannot live in complete isolation. There’s a lot of discussion on inferiority, the futility of living to satisfy the expectations of other people, and the uselessness of comparing oneself to others:

All you can do with regard to your own life is choose the best path that you believe in. [And] what kind of judgment do other people pass on that choice? That is the task of other people, and is not a matter you can do anything about.

Removing judgment between two people means that interpersonal relationships then become horizontal – made of a community of equals – instead of vertical (in which there is a hierarchy) once an individual has learned to like themself as they are. The concept of “horizontal relationships” (joke here you may insert, plus joke about insertion as well, if you like) was something my brain has chewed on for days now, especially as it pertains to adults and their relationships with their parents.

There are some hurdles to this book that I want to warn about. The philosopher struggled, I think, when trying to explain the difference between etiology, the study of causation, and teleology, which is the study of a purpose of a particular choice, not the cause. Teleology is goal-focused, as the philosopher explains:

“We are not determined by our experiences, but the meaning we give them is self-determining.”

While I like the idea of looking forward rather than back, often the dialogue and examples seemed to blame victims for their own circumstances.  Early on, the philosopher makes the assertion that trauma isn’t real (which I heartily disagree with and think is irresponsible and cruel as a chapter heading, especially in a book that talks so much about validating the individual).  There’s an example of an agoraphobic person that was explained very poorly, and in a way that I found thoughtless and unkind. Moreover, some of the described solutions or realignments of thinking are not so simple when the cause of a problem is, for example, massive, structural, and entirely outside of one’s control.

I have been hesitant to review this book in part because I’m not sure what to say beyond, “This was a really weird reading experience for me, but it’s interesting, and despite some flaws may be of interest,” and in part because I’m not entirely sure I have understood all of it. In some respects, it’s about setting boundaries and identifying what is and is not my task. It’s also about identifying communities of people whose goals align with my own, and setting aside my own feelings of inferiority in order to foster more equitable and supportive relationships.

The part where I most stumble with this text, aside from my great dislike of the victim blaming sections, is the reality of interpersonal interactions. What other people think of me is, according to this book, “not my task,” but in reality, sometimes I do need to manage and consider the expectations and feelings of other people about my choices. The practical application of some of the concepts inside this book remain somewhat tenuous for me. That said, I am still thinking about this book, questioning what I learned, and examining how much of it can reframe how I see the world.

The Courage to Be Disliked by Ichiro Kishimi