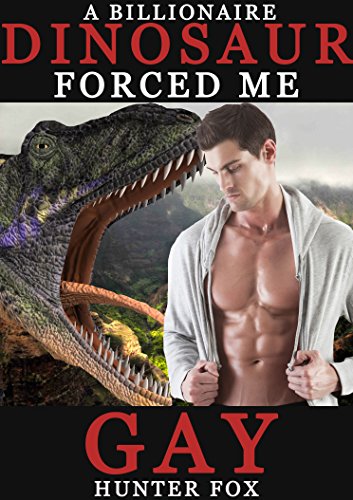 A Billionaire Dinosaur Forced Me Gay

I remember when I was a pre-teen and a friend told me what doggy-style was, and I was scandalized and horrified and thought it was the grossest thing ever.

Obviously I read The Billionaire Dinosaur Forced Me Gay so you don’t have to. Also I’m at that stage of exhaustion where basically everything is funny and I’m making impulse buying decisions.

So look, here’s how it goes down: John Harriot is really excited because he got a job as an assistant to a dinosaur CEO. John is human. His new dinosaur boss, Oliver Anderson, is not. Can we just pause here to reflect on the fact that the dinosaur is named Oliver Fucking Anderson? It’s so weirdly WASP-y and specific that I had to wonder if the author knows an Oliver Anderson and this is a big fuck you to him. I mean, if I were writing a book about a dude being forcibly sodomized by his dinosaur boss, I’d give that dinosaur boss a fucking dinosaur name like Mr. RazorClaws McSharpTeeth. Everyone knows dinosaurs had appropriately bad ass names, and even if they didn’t, fucking watch The Land Before Time or something.

So John is really excited, but then he calls his dad and his dad rains all over his parade:

“The CEO…isn’t that Oliver Anderson? The dinosaur billionaire?” he asked, I could hear the upset tone in his voice. My father had never liked the dinosaurs ever since they began taking control of the world economy. When I was growing up he tried to condition me to hate them too. I never did though, I thought they had just as many rights as we did. They shouldn’t be punished because they had extremely accurate stock predictions in the eighties, becoming the single leading force of Wall Street presently.

Let’s dissect that precious little nugget, shall we?

Firstly, all the grammar errors in there belong to the author, but I honestly don’t care because when I’m reading a book about billionaire dinosaurs taking advantage of their young human assistants, I don’t hold out a lot of hope for editing.

Secondly, I don’t know what the fuck dinosaurs are supposed to represent here given the dino-prejudice mentioned above. Note, that John doesn’t think the dinosaurs deserve the same rights as humans, he thinks they have the same rights are humans but apparently he isn’t fucking sure on that one.

Also I found the whole dinosaurs-taking-over-the-economy-due-to-stock-predictions to be harder to wrap my head around than dinosaur billionaires fucking their human assistants. I mean, let’s be honest here, if someone is writing a book about a talking, billionaire dinosaur, you know he’s going to write that the dinosaur sticks his dick somewhere. It’s human nature. Dino-human sex must be thought about and written about.

But dinosaurs running the global economy? I have so many questions. If all of this started in the 80’s did Working Girl never happen? What about the repeal of Glass-Steagall? Was the song Walk the Dinosaur really a subversive protest song? Were the members of Was Not Was thrown into jail? I want to read that fucking book.

Also, apparently dinosaurs can talk and wear clothes and posses human-level intelligence. Just expect me to accept that, Mr. Fox? Well, I don’t. How the fuck is a dinosaur going to wear pants what with its tail hanging out? And how would a T-Rex button his waistcoat? No, clearly, logic demands that if dinosaurs were running the global economy and setting consumer trends, we’d all be naked except humans would have to wear “shame sacks” to keep from freezing to death. Obviously.

Dinosaurs would have no such need for these sacks as they would have heat lamps carefully installed in all their dwellings and as the leaders of this modern society would spend very little time out of doors in the winter or would just retire to warmer climates, making Florida the new capital of international commerce.

Anyway, moving along, John goes to work and meets up with Oliver. Strangely the author never tells us what type of dinosaur Oliver is. We know that Oliver’s butler is a triceratops, his helicopter pilot is a pterodactyl (I KNOW), and the building security officers are raptors.

I can only assume by the cover art, and the fact that it’s the fucking obvious choice, that Oliver is a T-Rex. I mean, if you’re going to write a book about a dinosaur fucking a dude, it’s gonna be a T-Rex, right? So John is strangely attracted to Oliver what with his purple and green skin, yellow eyes, and powerful demeanor. He tries to keep his shit together though because obviously rules of workplace etiquette discourage fawning over your billionaire dinosaur boss openly even if his eyes are yellower than Edward Cullen’s.

But then Oliver orders John to accompany him to his beach house, and when he takes John to the library, and well, things happen.

I actually Googled “How big is a T-Rex’s penis?” while I was reading this story. It’s days like this that I really hope the NSA is looking at my search history. Anyway, there was actually a special on Discovery Channel called Tyrannosaur Sex and I watched some it.

They interviewed a paleontologist who was clearly super fucking happy, after what was no doubt a long and difficult PhD track, to be answering the first question that I’m sure everyone asks him, “Yeah, but how big was its dick?”

And the answer is no one knows. There are examples in the animal kingdom of relatively tiny dick-to-body size ratios, so for all we know Oliver had a tiny little todger.

Of course, Mr. Fox chooses to go the “giant reptile schlong” route which I found to be a very predictable choice. I mean, maybe dinosaurs run the world economy so they can buy luxury vehicles to compensate for their teeny little dino-sausages? Maybe Oliver is conflicted at his inability to to satisfy his human lovers despite his money and power?

Nope. He’s got a big penis. He shoves it places. John never actually consents but he enjoys being humiliated and cover in dino-jizz. I don’t know if Salmonella was a concern, but I’d be worried.

Then Oliver dismisses him, John having served his purpose, and John realizes his father was right all along. He vows to use and humiliate Oliver in revenge. The end.

This book had so many possibilities. I mean, Mr. Fox could have re-written the past thirty-five years of economic history from a reptilian lens. Instead of the Gilded Age it could have been the Scaled Age. Maybe it could be a metaphor that the modern financial system is truly run by the cold-blooded?  Instead he went down the predictable and ultimately tedious route of having this story be about a giant dino-penis shoved in some guy’s butt. No stars.

IT GOT BETTER. Alisha Rai and Maisey Yates quick-wrote the het version on Twitter:

A Billionaire Dinosaur Forced Me Gay by Hunter Fox