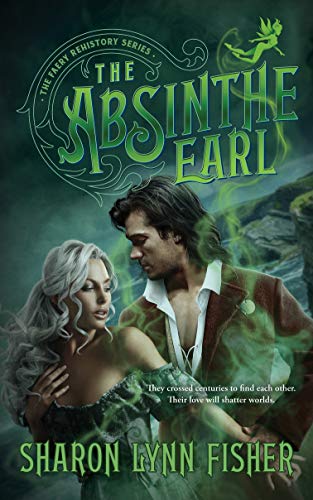 Wooooow. This is a book with some serious “absinthe + Yeats” energy. I don’t know what happened, but it was certainly operatic. I liked the imagery but must post a STRONG TW:

The Absinthe Earl is a fantasy romance set in 1882. I’ll let the publisher set everything up for you:

Miss Ada Quicksilver, a student of London’s Lovelace Academy for Promising Young Women, is spending her holiday in Ireland to pursue her anthropological study of fairies. She visits Dublin’s absinthe bars to investigate a supposed association between the bittersweet spirit and fairy sightings.

One night a handsome Irishman approaches her, introducing himself as Edward Donoghue. Edward takes absinthe to relieve his sleepwalking, and she is eager to hear whether he has experience with fairies. Instead, she discovers that he’s the earl of Meath, and that he will soon visit a mysterious ruin at Newgrange on the orders of his cousin, the beautiful, half-mad Queen Isolde. On learning about Ada’s area of study, he invites her to accompany him.

Ada is torn between a sensible fear of becoming entangled with the clearly troubled gentleman and her compelling desire to ease his suffering. Finally she accepts his invitation, and they arrive in time for the winter solstice. That night, the secret of Edward’s affliction is revealed: he is, in fact, a lord in two worlds and can no longer suppress his shadow self.

Little does either of them realize that their blossoming friendship and slowly kindling passion will lead to discoveries that wrench open a door sealed for centuries.

You can see why I let the publisher explain it – that’s a lot of plot, and that’s only the first few chapters. The book ends up involving possession, sex, confusion, otherworldly politics, the ghost of Grace O’Malley (pirate), banshees, bog men, preventing a second Great Famine in Ireland, and a giant battle with an actual giant in it.

Disclaimer: I read this during a fibro flare and during a time when I was extraordinarily tired. I enjoyed it but struggled to actually follow it. Things happen very quickly. One minute our leads are napping on a train, then they are running around on top of the train, then they are transported from the top of a train to a faery pirate ship on the high seas, and they get about one transition sentence per set change. After a while I just let the scenery happen, which is why my review mostly consists of long ways to say, “Pretty. Shiny.”

I had begun to know you. You had begun to know me. I fear now that we will be consumed by their passion. And, Ada, don’t mistake me-I yearn for that. Its siren song is almost irresistible…but if that happens, will we lose the opportunity to write the story of us, whatever that may be? Will we not be a mere footnote in their epic?

The only reason this aspect didn’t make the book a DNF for me as that it’s not presented as OK. Diarmuid is not presented as a hero. He’s presented consistently as a narcissistic jerk. For the most part, Cliona talks to Ada in Ada’s head instead of possessing her, whereas Diarmuid treats Edward like a meat puppet. Edward and Ada hold off their possessors pretty easily, and the full import didn’t sink in for me until later. The scenes of posession are presented as erotic, even though neither Edward and Ada consent and neither wants the possesions to take place. The fact that this is somewhat in keeping with a certain type of supernatural fantasy and old school forced seduction motif doesn’t make the erotization of rape any less disturbing.

And while Diarmuid and Cliona are granted a chance to say goodbye to each other in the end, they never have sex or any kind of mortal HEA.

Meanwhile, the imagery is amazing:

She was a filmy apparition, as was the vessel that, I now saw, surrounded us. We were standing on the deck of a ship, an enormous griffin’s head at it’s prow. Sails were hoisted and filled, and, glancing over the railing, I saw flat-paddled oars extending from holes in the hull and digging powerfully at the sky. Flying alongside the ship were more than a dozen ravens twice the size of a man…On their backs, the birds carried what I at first took for children but, on closer inspection, found to be little people with sparrowline faces.

What we have here is a sort of epic, operatic Irish fairy tale and a showdown between Old Skool romance and more modern-style romance. Diarmuid is all about toxic masculinity, with strong feelings of possessiveness, and jealousy, and a history of womanizing. He’s also a fan, as I said, of what we used to call “forced seduction.” Cliona is defined entirely by her relationships with men and to her baby.

In contrast, Ada has a personal history of independence with a professional career and her own interests, and Edward is all about consent. When he feels jealous, he’s embarrassed by it. The one time he tries to be controlling he regrets it. Edward and Ada have a mutually respectful relationship. Alas, Edward and Ada also have the kind of insta-love that is partially explained by their ancestral past but still makes the relationship pretty superficial, especially early on.

Be warned that just because this book is set in a real place in a real time doesn’t make it historical fiction – if it were, Ada wouldn’t do anything she does without a chaperone. If you like fantasy, then this might work for you, but if you dislike historical inaccuracies then for heaven’s sake back away slowly and don’t make eye contact.

I enjoyed the imagery and the romance between Edward and Ada, although it develops improbably quickly. Ada is intelligent, resourceful, and empathetic, and has enough self-defense training so that she can handle herself competently, if not at a highly trained warrior level. Edward is also these things plus he respects Ada’s knowledge (she studies faery lore). Really the very quickest way a hero can win me over is to respect a woman’s competence in her field, so that was easy. Back in the day, I could have told you how well this book holds up in terms of mythology – there’s heaps of mythology and folklore in it, to my delight. Alas, I haven’t studied that field for some time so will have to rely on others to say if the mythology is spot on or not.

I recommend this book if you like Irish mythology and have a high tolerance for operatic behavior and stakes, surreal imagery, a fast-paced romance, and weird rapey supernatural beings. However, the story moves too quickly for the romance to develop in a solid way, the historical issues made me twitchy, and in general the plot moves so fast that there’s no time to get invested in anything or anybody other than Edward and Ada. I also felt that the language was sometimes stilted, in keeping with the high opera tone of the story. It’s an entertaining good Halloween yarn to read in bed on a rainy night but I’m not sure it made any sense in the end.