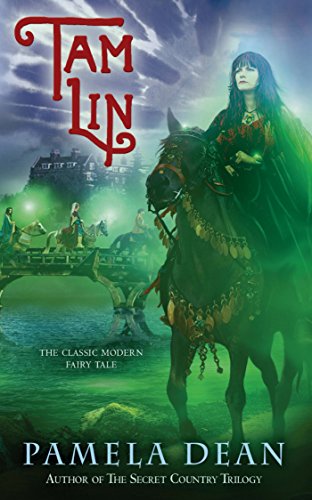 Tam Lin, by Pamela Dean, is one of those novels that has popped up in the comments and in book recommendation posts a lot of times and never gotten a full review. I figured I’d use some of my quarantine time to tackle it and what a long, strange book it was – sort of a romance, sort of a fairytale, and mostly a book about college. I feel like I’d need to read it three or four more times before I know quite how I feel about it, but here’s my first impression.

The story begins on the first day of college, with Janet moving into her dorm room at Blackstock College in Minnesota. She has two roommates, Molly, whom she likes a great deal, and Tina, whom she barely tolerates. Janet, Molly, and Tina quickly become friends with Nick, Robin, and Thomas. Janet and Nick start dating, as do Molly and Robin and Tina and Thomas. The story covers Janet’s four years as an undergraduate.

The reader is assumed to have some familiarity with the old Scottish ballad, “Tam Lin.” In this poem, a human woman named Janet meets a mysterious man (Tam Lin) and becomes pregnant by him. She considers aborting the baby (using herbs) until he reappears and tells her that he is mortal, but that he is being held captive by the Queen of Faerie. Tam Lin tells Janet that she can save him from the fae if, on Halloween night, she drags him from his horse (the fae ride out on Halloween) and holds on to him as he undergoes a series of changes. Which she does, cause she’s the best.

The most interesting thing about Dean’s urban fantasy is how little fantasy is in it and yet how much. The world of the college is its own little island where people passionately debate the merits of learning Latin. It’s clear from the first page that something is odd about the college. There is a rumored ghost who throws books, plants grow out of season, and the Classics majors are all eccentric. Nick and Robin make odd allusions to being older than they look and keep having entire conversations in Elizabethan English. At one point Janet idly wonders whether Nick, Robin, and the improbably good-looking Thomas might be aliens.

However, most of the oddities are subtle, and the plot stuff doesn’t kick into high gear until the last chapter of the book. Instead, Janet does undergrad stuff. She works on papers. She has sex for the first time (with Nick). She and her roommates adopt a cat. She reads a lot. It’s fascinating, because this whole epic story about fairyland is happening, but it’s so out of focus that there doesn’t seem to have been any plot at all until the end of the book when all of the plot suddenly reveals itself. It shouldn’t work and yet it’s both utterly mundane and completely haunting. It’s a slow paced book until the last fifty pages with very little conflict, EXCEPT that this epic fantasy plot (of the ballad) is happening under the surface.

This book was first published in 1991 and the story takes place in the 1970s, two details I mention because of a few moments in the book that I suspect seemed progressive at the time (particularly a discussion about whether actors of various races could play certain Shakespeare characters) and now seem more regressive (the answer to the aforementioned question is clearly “YES”). Also, the setting of the 1970s is important because of the role that the birth control pill plays in the story as a fairly new contraceptive, as well as the availability and legality of abortion.

The decision of whether or not to have an abortion is an important plot point, so readers who are triggered by this issue beware. Without spoiling anything, I can say that the characters are general pro-choice, and that there is no sex-shaming. The roomies going to the clinic together to get their very first birth control pills was a rite of passage moment that I rather adored. However, there’s also some magical pregnancy/baby stuff that might frustrate some readers.

I was not 100% onboard with the romance. This is a fantasy/coming of age novel, not a romance novel (in structural terms) and the focus is on Janet. If you know the poem, you know who Janet will end up with, and they do have a clear connection to each other, but I never felt that they really loved each other. It just seems like it’s the end of the book, and the book is based on a poem, so now they have to get together before the book ends.

So did I LIKE the book? Yes, very much, as a story about college. I identified with it greatly. Because nothing much happens for most of the book, it was a slow read for me. As a fantasy, I thought it needed more fantasy in it. As a novel, I thought the structure was too slow most of the time and madly rushed at the end.

The way tomorrow and tomorrow and tomorrow (there’s a lot of Shakespeare in the book) creeps in its petty pace from day to day in the book is, I think, part of the point. When you start college, if you are privileged enough to do it like Janet does (four years, full time student, lives in a dorm, ah, those lower 1970s tuition rates) then every day is kinda like every other day but after four years you are a different person than you were on the first day.

As for magic – instead of magic being a sudden flashy thing, it just quietly pervades. The world of English Literature and the world of Classics and the world of theater and idea of study and learning for its own sake – these are, in themselves, magical and increasingly unusual things, so it’s no wonder that certain flowers grow out of season, or that the Classics Department rides on horseback at midnight every Halloween. In a microcosm where all is thought, and most of that thought is bent toward the past, of COURSE these things would happen. Sometimes the vagueness feels like a feature and sometimes a bug. It’s a very odd book.

I thought I’d never finish this one. But once I finished it, I wanted to read it again. I guess I just wasn’t ready to leave yet. This isn’t one of my favorite love stories, but I think it’s my favorite college story. It’s so immersive, and so true to the experience I had at my small liberal arts college. The book very much celebrates the idea of learning and thinking for its own sake – that we are richer as a people if we, as a society, don’t lose that ability to treasure learning for no other reason but that it brings joy.

Readers, I try not to read other reviews before writing my own, and I rarely link to them – but when author Jo Walton reviews a book, I pay attention. Here is her marvelous review. I found this quote especially fascinating:

It isn’t just a book you like better when you re-read it, it’s a book that you haven’t had the complete experience of reading unless you’ve read it twice.

I haven’t re-read the book yet, but I think this is true. So much is coded that when I go back and reread it, knowing the things I know having read it once, I think my experience will be very different. I don’t recommend this if you prefer fast-paced books or a lot of drama, but I do recommend this if you like solving puzzles, if you can’t get enough allusions of Shakespeare to suit you, and if you had, or wish you had, a weird and dreamy time at college.