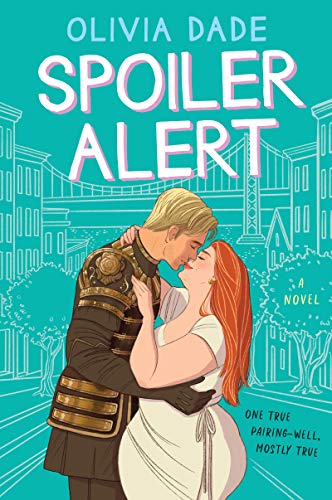 I read the first chapter of Spoiler Alert and was sucked into a compulsive reading vortex, becoming annoyed when work or sleep tried to distract me from gobbling up the book. It’s a delightful celebrity romance that treats writing sexy fanfiction as a worthy creative pursuit. It also has a classic falling for your penpal storyline, without the slow burn over correspondence that tends to annoy me. This story of a fanfiction writer who falls for the actor she writes about, who is also a secret fanfiction writer, is my new favorite version of that trope. I’m an infrequent fanfiction reader, just because I tend to be far behind in my media consumption, and no one’s interested in my hot takes on ER. The sweetness of this cozy romance, and the thoughtful fat representation, kept me from caring about the fandom in-jokes that went over my head.

Marcus is an actor who got his big break on a Game of Thrones-esque ensemble series, God of the Gates. Marcus is shy, and finds it easier to pretend that he’s a vapid himbo at work, rather than admit that he’s socially awkward, and hiding his dyslexia. He’s a huge fan of the books his show is based on, and runs a fanfiction forum devoted to God of the Gates. Unfortunately, Marcus’s contract requires that he never publicly critique or share details about the show, something he’s finding increasingly difficult. Thank goodness he can snark anonymously with his online BFF, Ultimate Lavinia Stan. Fanfiction gives him an outlet for his complaints about how the show’s Mediocre Dude™ producers are turning brilliant source material into misogynist claptrap. I typically have trouble suspending disbelief when celebrity characters claim to be obsessed fans of their own work, but Marcus’s love for the show and its fan community is reinforced in nearly every chapter. The book includes some of his angst-filled stories, and his commentary on April’s smutty ones. He spends most of his free time in fan forums, and misses them when he tries to step back from his involvement later in the book. His frustration with the show’s plot detours once they run out of published books to follow will feel familiar to despairing GoT fans.

April is a freelance geologist who doesn’t like to advertise that she spends most of her free time writing God of the Gates fanfiction. When April escapes to a cushy state job staffed by folk music-loving musicians, she decides to let her fandom flag fly. Step One, tweet a photo of her gorgeous fat body cosplaying her favorite character, using her real name. When she gets hassled by a few fat shaming dudes, Marcus shows up in her mentions and pointedly asks her on a date, without knowing she’s his fandom bestie. April suspects a publicity stunt, but is pleasantly surprised when sparks fly between them. Poor Marcus is shocked when April tells him her fanfiction name, but he can’t tell her about his alter ego without risking his job. Can he convince her, and himself, that he’s more than just a pretty face?

I loved how Marcus’s career as an actor is a central part of the book. It reminded me of Lucy Parker’s Act Like It, because acting and celebrity are presented as real jobs that take skill, active management, and a buttload of strategy. Marcus’s struggle to escape the bland but amusing public persona he’s created for himself was frequently hilarious. He’s basically a Greek mythology nerd pretending to be Jason Mendoza from The Good Place. Marcus’s tentative friendships with coworkers were a highlight for me, especially when one the other stars discovers that his character is frequently featured in pegging fics. At the same time, April’s coworkers are very chill about her dating a celebrity, because women scientists are the coolest friends.

Spoiler Alert weaves in many common fan complaints—like terrible casting that diverges from the source material, from both the actor and fan perspective. It doesn’t skirt over the potentially creepy dynamics embedded in the “fan dates fave” trope. April and Marcus even talk about the experience of sleeping with someone whose face and body you’ve studied obsessively. I found this fascinating, although I could have done with fewer descriptions of Marcus’s flat abs.

This was a low-tension read. The couple’s IRL connection is instant for Marcus, because he’s already half in-love with April after years of online friendship. Most of the story follows Marcus and April as they manage the complications of their budding relationship, and their own emotional baggage. The main obstacle to a HEA is Marcus deciding whether, or when, to tell April about his secret fandom identity. In the meantime, Marcus makes up a story to explain his disappearance from the forums while April wonders why her confidante is now ghosting her. Even after Marcus and April start dating, he’s desperately afraid of losing her. Emo beta heroes are my catnip, and super-sensitive Marcus worships April. April lovingly refers to him as a drama queen at one point. I wanted to eat him with a spoon, but also wanted to smack him for keeping secrets. However, Marcus’s reasons for not telling April about their past online relationship are compelling, and I appreciated that the book didn’t act like it was reasonable for him (or April) to implode his career. Meanwhile, April is navigating being a minor public figure while learning to trust Marcus, and she makes plenty of mistakes of her own along the way. I appreciated how ethical Marcus tries to be while hiding their past connection, and that the inevitable relationship fuck-ups are evenly divided between Marcus and April. This storyline could easily have been stressful, but these two spend most of their time cuddling on the couch.

The fat representation in Spoiler Alert is strong. Marcus starts the book as a caring but cluelessly privileged hero, and gets schooled in fatphobia thanks to April. April has a clear analysis of size discrimination, and a sense of her own worth. But she also has moments of understandable insecurity about how other people will respond to her size, including Marcus, that last through most of the book. What worked about Spoiler Alert was how April never believes that there’s anything wrong with her body. She’s a confident badass. However, April knows that other people—lovers, fellow fans, her parents, might be assholes about her size. The problem here is clearly with them, not her. The challenges of dating while fat aren’t ignored, but they stay in the background so the book’s fluffy tone remains lighthearted.

For both April and Marcus, this felt like the first relationship where they were completely accepted, and that’s part of what helps equalize the power balance between them. Marcus has endured a lifetime of bullying from parents who thought his dyslexia was stupidity, and he’s had lovers run after glimpsing the nerdy personality behind his surfer boy looks. Marcus’s journey is learning to see himself as potentially lovable, while April’s is learning to trust that others will see herself the way she does. However, these two suck at having difficult conversations, particularly with their parents, with whom they both have toxic relationships. Marcus’s were teachers who didn’t notice his learning disabilities, while April’s can’t imagine she’ll be happy without dieting. They both figure their shit out over the course of the story, but if you need characters with stellar emotional problem-solving from page one, this is not your book. I was in the mood for realistic relationship development, so this worked for me. I wanted to cheer when these two learned to set firm boundaries with their parents.

My main issue with this book is the structure. The story is told in alternating POV chapters, and every other chapter is an “interstitial,” including excerpts from God and the Gates fics, scenes from Marcus’s movie scripts, and past DMs between his and April’s fan personas. These were occasionally funny or poignant, but I hated the way they disrupted the narrative flow during dramatic moments. Most of them didn’t add much to the story, except for demonstrating the depth of Marcus and April’s pre-dating friendship, and I skimmed over a bunch. Readers more steeped in fan culture might enjoy drabbles about a fictional tv series more than I, but it didn’t keep me from loving the book.

Spoiler Alert is tropey wish fulfillment, but at its heart, it’s is a quiet contemporary with a #couplegoals relationship where both characters offer comfort, create beautiful art, and help each other overcome insecurities. I never questioned whether the relationship made sense, and these two are adorable even when they’re not being completely honest with themselves (and each other). Spoiler Alert is also a love letter to fandoms, that will make you want to chase your romance novel with a shot of fanfiction.