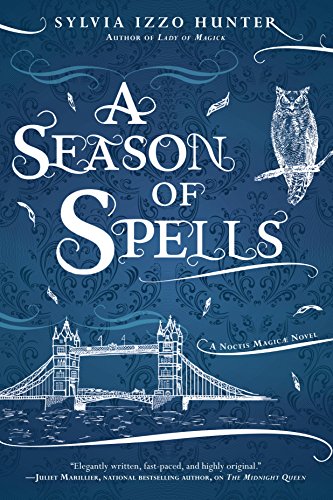 A Season of Spells

A Season of Spells, which is not seasonal by the way, is a fantasy book with several plots that are haphazardly glued together. Initially the plot seems to be that Sophie, the main character of the trilogy, has to convince two people to get married for royal purposes. But that plot is abandoned in favor of two other plots. One involves a plot against the king, and the other involves an abandoned university for women. Within those plots are various subplots and developments, and the book careens from plot to plot in the most confusing way.

I’m fairly certain that one reason I could not get interested in any of the plots was because I hadn’t read the other two books. However, I also think that I couldn’t get invested in the plots because as soon as I felt a flicker of interest we were off to something else. The pace was unbelievably awkward and nothing seemed to connect in a meaningful way until very near the end of the book. Nothing that involves so many couples, magical owls, and a feminist university, plus a garden maze and an attempt at regicide, should be so incredibly boring. But it was.

The book does have romantic elements, but they are very minor. It kicks off with a plot thread about two people, Roland and Lucia, who are supposed to get married in a political marriage. They meet for the first time and sparks don’t exactly fly. Will they or won’t they? There’s also the romantic relationship between Sophie and Gray (their romance drove the first book but by this book they are a comfortable established couple). Another established couple that could use some more development is that of Joanna (Sophie’s sister) and Gwendolen. They are in the closet and the story seems to be offering a solution to their problem.

Unfortunately, all these relationship issues are pushed to the side when the book starts focusing on the plot against the kingdom and the magical university plotline. I wasn’t disappointed that the romances weren’t central focus, but I was disappointed that ultimately they weren’t dealt with at all except in the last two chapters, which serve as very short epilogues. Lucia and Roland seem to appreciate each other better as their adventures continue, but while on screen their small moments would shine, on the page they fade into the background. Joanna and Gwendolen, and Sophie and Gray end where we first found them.

There were things I liked about the book. I liked the characters very much, which was one of the reasons that it bugged me when the book would drop a bunch of them and skip on to a new issue. Almost every character is presented as a complex person. It also aces the Bechdel test time and time again. The interactions between characters are believable. Even the best of friends, when they find themselves cooped up and helpless to take action, tread on one another’s feelings. They all have flaws but they are also all smart, competent people who care deeply about one another. Even the traitor among them is given humanity.

I thought that the descriptive language and the way magic was incorporated was wonderful. I have to admit that while I liked the idea of the university, the actual pages and pages describing the plot thread about the university bored me. But if you are into, for instance, maps, this kind of prose is just delicious:

No well-supplied cartographer had drawn this map. The rough and ready lines, the cramped script, suggested a military man working in the field, marking out rivers and roads and wagon-tracks, the ponds that might serve to water cavalry and pack-horses, the villages and farms where supplies might be replenished and officers quartered at need, the obstacles and fortifications that must be taken into account in planning and executing a military campaign. Borders had been drawn and then scratched out, till in some long-contested territories -along the river Loir, for example – the map was a palimpsest.

This book almost works as a stand-alone. I had no problem figuring out who everyone was and what was going on, although I did lose interest about halfway through the book. The reason I suggest starting with the first book is that I assume that even given the pacing problems, it’s probably much easier for readers to get invested in the plot(s), which involve recurring characters, if they’ve been following these characters from the beginning. The plot(s) appear to have been a long time in the making and I think it’s safe to assume that at least some of the time when I said “Huh?” longtime readers probably would say “A HAH!”

I’m grading this book a somewhat generous B- because I suspect that most of my problems with the book came from reading it without reading the first two books. I’d tentatively recommend this series to fans of Regency-ish fantasy, but I do have to warn you that while there are many romantic couples, there isn’t much actual romance, at least not in this installment. There’s feminism though, and a guy who shapeshifts into an owl, and a lot of books and maps and codes, plus a nice focus on eating, bathing, sleeping, and wearing nice things – all of which I’m highly in favor of. So despite my lukewarm reaction to the plot, I think the series taken as a whole is highly promising.

A Season of Spells by Sylvia Izzo Hunter