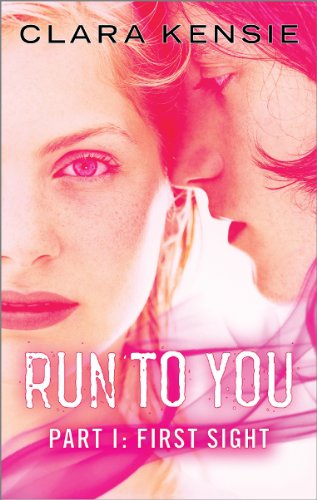 Run to You Part One: First Sight

This RITA® Reader Challenge 2015 review was written by Laney Shupe. This story was nominated for the RITA® in the Best First Book, YA Romance category.

Part One in the riveting romantic thriller about a family on the run from a deadly past, and a first love that will transcend secrets, lies and danger…

Sarah Spencer has a secret: her real name is Tessa Carson, and to stay alive, she can tell no one the truth about her psychically gifted family and the danger they are running from. As the new girl in the latest of countless schools, she also runs from her attraction to Tristan Walker—after all, she can’t even tell him her real name. But Tristan won’t be put off by a few secrets. Not even dangerous ones that might rip Tessa from his arms before they even kiss…

RUN TO YOU is Tessa and Tristan’s saga—two books about psychic gifts, secret lives and dangerous loves. Each book is told in three parts: a total of six shattering reads that will stay with you long after the last page.

This nominated story was originally released as a six-part serial but is now available as two full-length books — Deception So Deadly and Deception So Dark.  On Kindle the series/parts are $1.99 each and the full-length books are $2.99 each so you’re better off to just go for the two books at $6 instead of the six-part series at $12.  I don’t think you’ll be content with stopping after Part I – it gets even better in Part II: Second Glance and Part III: Third Charm.  However, I’m of the opinion that Parts IV, V, and VI could’ve been wrapped into one – the first three parts (or Book 1 of 2) are fast-paced and full of surprises, but the final three parts (or Book 2 of 2) seem to drag out too much.  I’ll try to restrict my comments here to Part I.

I tend to avoid serials because I need my stories to have clear resolutions – that being said, this nominated book needed a reviewer and I was up to the challenge.  About halfway through I thought to myself “I can see why this was nominated for the romantic suspense award.”  Oh, wait.  Check the list again.  It was nominated for Young Adult Romance and Best First Book, not Romantic Suspense.  Well, it should have been triple-nominated instead of double-nominated!  Or maybe it’s just that young adults need a little bit more to their romantic stories than “just” romance.  Either way, Clara Kensie (the author) does a great job of keeping up the suspense throughout the story.  From the second sentence,  “He’d found us,” to the last word, “Tessa,” We fear for the young narrator.

Tessa and her family are on the run and we soon learn it has something to do with their psychic abilities.  Because this story is told in the first person, you soon get a sense that Tessa is more of a quiet observer in her life than an active participant.  She struggles with self-worth as the only family-member without a psychic gift:  “No one in my family would ever understand what it was like to be the only one without any talents at all.”

Because of her quiet, wallflower nature, it’s hard to discern Tessa’s feelings for Tristan.  Also, the first-person narration doesn’t lend us clues as to why Tristan is so taken with Tessa (although that’s developed in the following series/parts).  I was a little reluctant to accept their relationship.  However, they won me over with Tristan’s caring nature and the way Tessa grew out of her shell with him.  Best romantic line of the story (and the entire series):  “We were brand-new and forever at the same time.”

I would recommend this story to YA fans, romance fans, and suspense fans.  At least Parts I-III (or Book 1 of 2).  Part I makes you fall in love with Tessa and Tristan.  Part II will turn the story on its axis and leave you asking for answers.  Part III will flip that axis around again and give you answers.  Parts IV-VI are good, but although they keep the story going, I lost the excitement I had built in the first three parts.

Grading only Part I: First Sight, Clara Kensie deserves an A-.

Run to You Part One: First Sight by Clara Kensie