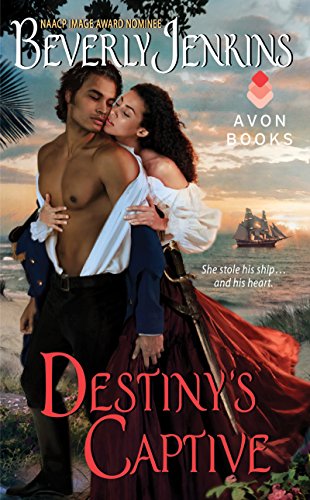 I have a love/hate relationship with Destiny’s Captive.  It’s a sheep in wolves’ clothing.  It has all the accoutrements of a story with a warrior woman character who takes charge but it’s actually a story about domestication, and it made me kind of depressed.

So, here’s the set up:  Noah is an American businessman with a ship, a lot of money, and a Troubled Past.  He’s doing business in Cuba when Pilar steals his ship.  She’s a spy and a gunrunner for Cuban revolutionaries and an occasional pirate.  This, of course, means she is my new BFF.  I really thought this whole book would be about Pilar the Pirate Queen.

But it is not meant to be, alas, for Pilar’s cover is blown and to save her life she agrees to marry Noah, who searched for her so he could get revenge and then at the last minute proposed instead.  A swordfight was involved – all proposals should be post-swordfight, in my opinion.  It was very “Legend of Zorro Starring Catherine Zeta Jones.”  Anyway, Noah and Pilar marry and go to Noah’s family’s ranch in California and the rest of the book is Pilar fitting in with the family and Noah dealing with his Troubled Past while they fall from like/lust to love.  Pilar trains a horse and threatens to stab a shopkeeper who insults her and Noah revisits the site of his Troubled Past and cries (as well he might – his past is horrible) and there’s a ton of shopping.

Noah is already used to his country and family.  He’s not power-hungry, but he’s very confident and in charge.  It’s Pilar who has to do all the adjusting.  The nice thing is that no one in Noah’s family, including Noah, wants Pilar to be proper and demure.  All the women in the family are firecrackers and the family members are all ferociously supportive of each other and of Pilar.  I realize that “fiery Latina” is a stereotype, but Pilar is only one of many fiery women in the book, so her character seemed less like a stereotype at work and more like a character who falls in love with a man who is accustomed to kick-ass women.  Noah and Pilar discuss going back to sea, but both of them feel it would be impractical if they have kids – and it’s a nice touch that they feel it would be impractical for both of them, not just Pilar.  And Pilar talks about wanting to work – wanting some kind of purpose in her new pampered life.  While Noah disagrees about some of her suggestions, he doesn’t oppose the basic idea and he promises that they will find an active role for her.

The depressing thing is that they never do find an active role for Pilar.  She gets used to her new environment, she buys new clothes, she and Noah pick out a site for a house, and she gets pregnant.  That’s it – that’s her story.  What about the revolution?  What about her thirst for social justice?  What is she going to do all day now?  Is there a sequel where we find out that she’s coordinating shipments of aid from San Francisco, or does she just have babies?   I like babies, and she’s thrilled to be having one, but it’s such a letdown that she goes from being a pirate revolutionary rebel to having no role to speak of.  She never becomes submissive but I wanted her to continue to have an active role in the larger world as part of her romance.

Also, there’s another female character who is treated in such a callous manner that even though she’s supposed to be a villain I rooted for her all along.  In general, this book excels at portraying strong-willed women who befriend each other.  The bonds between mothers, sisters, and sister-in-laws were delightful. That makes the character of the Mean Girl even more out of place.  There are plenty of villains in the book already so her character is completely unnecessary.  She’s betrayed by everyone around her and we’re supposed to hate her because she doesn’t accept that nicely?  Screw that.  Maybe there’s a sequel in which she becomes the new pirate queen – I’d read the hell out of that.

This is the third book in a trilogy and I definitely could tell that I had missed a lot.  None of it impacted the Noah/Pilar story, but there’s a lot of time devoted to Noah’s mom that clearly tied in to a previous book.  I love that an older woman gets to have a romance, one that includes hot sex, but in this particular book it was a distraction from the main story.

One of the things I have a love/hate relationship with is the use of language in the book.  There’s something about Beverly Jenkins’ sentence structure, especially when people are speaking, that drives me crazy but I can’t figure out what it is.  Maybe it’s just a bit more formal than what I’m used to, and there’s also a lot of telling instead of showing, of the “He felt angry” variety.  On the other hand, there are stunning paragraphs like this one:

Pilar loved the city of Santiago.  Its crowded, twisted streets were narrow and steep, and from different points one could view the tree-covered mountains and the beautiful blue waters of the bay that emptied into the Caribbean.  Most of the buildings were stone and constructed by Spain.  The grander places with their expansive gated courtyards and ironwork verandahs housed the city’s wealthy, but she and her sister Doneta were walking the cramped, crowded streets of the poor, which were lined with women selling fruits and vegetables; men offering to black shoes; old Voudon women from Haiti peddling potions guaranteed to bring death to your enemies, make a person fall in love, and everything in between.  Small children ran through the crowds, garnering stern warnings from local elders, and laundry hung in windows open to the breeze.  The air was thick with the mouthwatering smells of braziers, cooking yams, fish, sheep, and goat, and the people they passed spoke French and Spanish, and because many from the Far East had been brought to the island as slaves, Chinese could be heard as well.

I love how that paragraph includes so many countries of origin and ethnicities, different classes and foods and professions, framed with the water and the mountains.  Noah is African-American and Pilar is Cuban-American.  It’s always thrilling to read a historical romance about non-white people and Beverly Jenkins always excels at weaving history into her stories while still providing a plausible happy ending.  Even though I’m dissatisfied with the path the story took, I still admire the sense of history, place, and community.

I loved how physical the world of the story feels – the blue sea in Cuba, the dresses, the parties, the dirt on the segregated train, the horses, and the discussions about American versus Cuban food.  I liked it that one kind of gun does not equal another – Pilar has to practice with rifles to improve her aim even though she’s already proficient with pistols.  I liked the sense of place and the sense of family, both Pilar’s and Noah’s.  I just wish that we could have seen more Pirate Pilar so I wouldn’t have to feel that she’s lost because of Pregnant Pilar.  The Cuban revolution was so important to her – her whole life was built around it.  Because of that, I don’t think she’ll be happy raising her kid and training horses (she’s very good with horses) and shopping.  That would be a great life for another heroine, but it feels incomplete for Pilar.