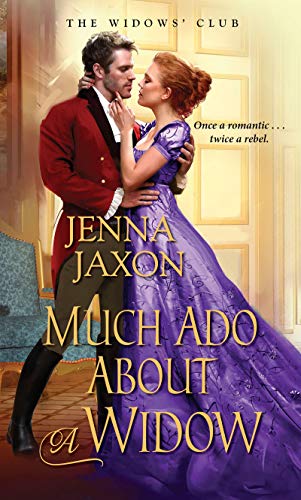 Much Ado about a Widow

Much Ado About A Widow starts with Georgie, two years widowed, returning to her father’s house to marry a man she loathes on pain of being disowned. On the way, she is kidnapped by unsavoury persons; she escapes them only to collide with Robin, Lord St Just, a friend of her brother’s, who rescues her… by kidnapping her again, this time onto his boat. To do him justice, this is probably the safest place for Georgie if she doesn’t want to marry Travers, but this is the first of several decisions he will make against Georgie’s will for her own good, and I have to say, I didn’t love this pattern. It didn’t help that he initially failed to believe Georgie’s story. He did redeem himself with Georgie (and somewhat with me) by diving into an icy sea and nearly dying in order to rescue her dog, but while this made him more likeable, my curmudgeonly side felt that this was not a great advertisement for his intelligence. Having said that, after this point, the relationship between Rob and Georgie became sweet and flirtatious and charming, and I was happily shipping them.

What really ruined the book for me, however, was just how terrible Georgie’s family was. Even her brother Jemmie, who was supposedly her ally, defaulted to assuming that Georgie was lying and that Rob was a villain at the drop of a hat, and once he decided to support their courtship, he was very old school about protecting her virtue – despite the fact that she was a widow and that, as his wife pointed out more than once, the two of them had enthusiastically and repeatedly anticipated their own vows. He also went on a tear about Rob stealing Georgie’s virtue, and his first act on catching up with the two of them was to punch Rob in the nose. Ah, the sweet, sweet smell of toxic masculinity!
But Jemmie was actually the good relative. Georgie’s father was absolutely set on Georgie marrying the cartoonishly horrible Travers, even after Travers attempted to rape Georgie, and even after Georgie had an offer from the far more eligible Rob. Her father’s attempts at coercion extended to sending people to kidnap Georgie back from Rob (which really ought to have been farcical – three kidnappings in one book? – but was not) and threatening to have her locked up in Bedlam if she refused to marry Travers. Lovely. Given his utter intransigence right up until the final chapters of the book, I found the ending hard to swallow.

I entered this book looking for a fun Regency-set historical, with kidnappings, pirates, threats of forced marriage and maybe a smuggler or two. Alas, I found it just a bit Old Skool, and definitely far too generously endowed with terrible people who had too much power over the heroine. As a result, I spent most of the book in a state of dread, which is not what I want from a romance novel. This is a D minus for me.

Lady Georgina Kirkpatrick defied her family, jilted her fiancé, and married the man she loved. But when her husband died at Waterloo, she was delivered right back into her father’s power…

Victory is sweet—but England’s triumph was Georgie’s rout. Now that she’s widowed, the loathsome marriage her father first arranged has simply been renegotiated. With neither money nor rights, and nowhere to flee, all she can do is cherish her last weeks of freedom… Until a band of ruffians overtake her carriage and kidnap her. When she escapes in seaside Brighton and encounters her brother’s rather wild friend, Lord St. Just—whom she suspects aspires to be a pirate—she’s prepared to entertain more of his adventurous suggestions than usual…

St. Just knows his mind and his duty, and he loves a challenge. Helping a fair lady make her farewells to hoodlums suits his talents well. Within the hour he has Georgie, her lady’s maid—and her little dog, too—sailing for his castle in Cornwall. Meanwhile, the lady’s entire family, her kidnappers, and her scheming intended are in pursuit. But as he and the indomitable Georgie grow closer, he begins to suspect that together they will prove a match for them all…