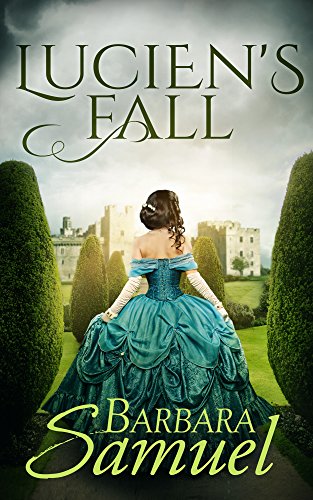 When I first wrote down my notes to review this book, I had downgraded it to a C- and mentally subtitled it, “A Review that Will Make Candy Stomp Her Foot at Me.” But since it was a Candy-recommended read, and because I know she enjoys a book that she can ruminate over for a good while, I figured I should let the plot simmer in the back of my mind for awhile and come back to it.

Sometimes, this is called “procrastination,” which is coincidentally my worst habit. Sometimes, it’s called “Sarah gets a lesson in reevaluating books” because after a week of thinking on it and writing down all the things that frustrated me, I realized that what bugged me was precisely what made the book good. And not “good” in the sense of, “Oh, it wasn’t so bad in comparison to some things I’ve read.” It was good in the sense that the author took risks and made real characters so that instead of villains that were cardboard and easily dismissed, I had secondary characters, fully-developed foils for the protagonists, and actions that were disruptive to the progress towards a happy ending, but that were driven by understandable motivation, not simple evil.  It was so good, in fact, that the grade was elevated after rumination to a B+.

Seems I have to face a sad fact about myself and my romance reading: I might have grown accustomed to being spoon-fed the antagonists and the forces acting against the protagonists. Maybe I’ve been reading too many paranormal evil-as-villain stories, or maybe I’ve been missing out, but clearly, I’m much better a romance reader for having read this story.

Lucien’s Fall, as evidenced by the title, is a romance that focuses mainly on the transformation of the hero, Lucien Harrow, Lord Esher. A terrible rake, a Lord Slut, even, Lucien is invited to a house party thrown by the incomparably beautiful Juliette, more appropriately known as Countess Whitethorn. Juliette’s stepdaughter, Madeline, is making a late entrance into society, and her stepmother is attempting to create an engagement between Madeline and Charles Devon, Marquess of Beauchamp, a man of considerable fortune. The Whitethorn estate, and the family living on it, are deeply in debt, and the house itself is falling down bit by bit. Juliette sacrificed jewelry to host the house party and clothe Madeline attractively, and scored quite a social coup by securing Lucien’s attendance. Lucien’s friend Jonathan is also Juliette’s current lover.

Lucien is a tortured hero like few others in romance. He’s tortured by his own actions, or inaction, his history, his past affairs, and by his own mind and body. As a result he’s barely functional in social situations half the time, and his reputation for outrageous behavior makes ample room for more of the same.

Madeline, however, is unimpressed – well, better to say she’s impressed but smart enough not to show any hint of interest. She knows that her bread is best buttered by an alliance with Beauchamp, and an affair with Lucien would lead only to ruin. Madeline is set on saving her home, Whitethorn, most specifically the gardens, which are her passion. She delayed her debut into society so she could travel the Continent and learn more about gardens and botany, and her goal is to restore the home and grounds with a marriage to a rich man. She’s not mercenary about it by any means, but she is honest with herself and her stepmother: there is no marriage for love in her future. And while Lucien attracts her, and he certainly has a fortune to spare, she knows he is not the sort to marry.

One of the most innovative and charming features of the story is the depth to which both Lucien and Madeline recognize their own roles as Rake Hero and Perfect Heroine. Well-schooled by a socially-aware stepmother, Madeline is more than conscious of her need to keep Lucien away from herself, as he would think nothing of ruining a virgin and walking away. But the almost meta-conversations they have on the topic are fascinating:

Behind her came footsteps…. Madeline smiled, unsurprised. “Join me, Lord Esher,” she said without turning.

“How did you know it was I without looking around?”

Madeline looked up at him. “I think there must be a book of rake’s etiquette,” she said lightly. “First rule is one must always follow one’s prey into a moonswept night.”

To her surprise, he laughed. “Well done…. What then would be my next step?”

Madeline straightened, knowing she must not show any hint of shyness or of blushing sensibility. If she were to put him off properly, he had to understand she knew well any technique he might attempt. “That would depend on the woman, of course, and the rake…. Pray tell, then, what tack you’ve chosen for your foray into my seduction.”

“Are you absolutely certain I’ve chosen to seduce you?”

“Yes, though you didn’t make up your mind until supper.”

How completely refreshing to have two characters acknowledge their roles, and their awareness of the other’s motivations. This meta-conversation happens a few other times in the course of the story, and it’s wonderful. Madeline makes it clear that she’s on to whatever plans Lucien comes up with, and she calls him on his behavior each and every time he is less than genuine with her and falls back on his libido-driven actions aimed solely at the flower that is not in her gardens. He gets very little leeway with her and she won’t tolerate any of his rake-ful behavior, not matter how affected she is by her own very real attraction to him.

Lucien himself is delicious, and I say that as an admitted sucker for the tortured, artistic hero. Lucien is a gifted individual with a talent for musical composition, a talent he was forced to squelch due to abuse and pressure after a personal humiliation and tragedy. He pays for his attempts to ignore his gift with blinding headaches, but when he meets Madeline, he sees a parallel to his own gift in her love and talent for gardening, and the health that comes with embracing one’s passions. Madeline begins to see what Lucien tries very deliberately to hide: the heartless rake he appears to be hides an enormously sensitive synesthete who can experience colors as sound, specifically classical music.

His efforts to deny his gifts and hide his emotional and musical sensitivity are reflections of his ability to hide or squander any good intentions he might have of behaving with honor. Thus his music and his morals are tied to one another as Lucien faces his own demons and acknowledges that he must change himself and modify his own behavior if he wants to become worthy of Madeline.

Therein lies my one problem with the book: Madeline herself. Lucien has to endure a great deal of effort to turn his actions and intentions in an honorable direction, and his template for honorable is Madeline, who refuses to accept his habitual rake routine. But Madeline in my estimation does not grow or change as much, and her goodness brings forgiveness much too easily when her own actions hurt, humiliate, and mistreat those who have been kind and honest with her. She is self-aware enough to recognize that the marquess to whom she could be engaged is subject to the same forced treatment from her that she suffers from Lucien: interest solely for the purpose of attracting a person for selfish ends. Lucien wants to bed her; she wants the security of the marquess’ fortune to save her home. Her goals might be slightly more altruistic but they are selfish in origin, and she knows it. Even with that self awareness, Madeline seems to get away with minimal consequences for some very selfish behavior throughout the story.

The ending itself also gave me trouble, and far be it from me to spoil it. But to sum up:

Show Spoiler
She didn’t choose him. She allowed herself to be chosen or even taken over and over again, even as her own selfishness made her less and less worthy of him while he became more worthy of her.

By far the best part of the book for me was the writing, specifically the characters. Samuel does not take the easy way out with any of the emotional entanglements working against Madeline and Lucien. Her mother is not in favor of any interaction between them, and will risk her own happiness to ensure that her daughter does not end up a rake’s victim. But even as she interferes, the reader is privy to enough of her character and motivation that even though I hated what she tries to do, I understood and empathized with her position. Equally, Samuel could have easily made Charles, Marquess Beauchamp, a villain, a shallow fool, or even a non-character. But as Madeline’s intended fiance, he’s not as attractive as Lucien, but he’s a good, kind, honorable man, and the complete and deliberate opposite of Lucien. He pays attention to his responsibilities and those whose lives depend on his estate management skills, and he chooses those responsibilities over frivolity and vice. To witness Madeline caught in the choice of peaceful marriage without love, and passionate love without the defined promise of marriage isn’t any easier for the reader than it is for Madeline herself, because again Samuel’s ability to create completely defined secondary characters makes the story that much more lush and moving.