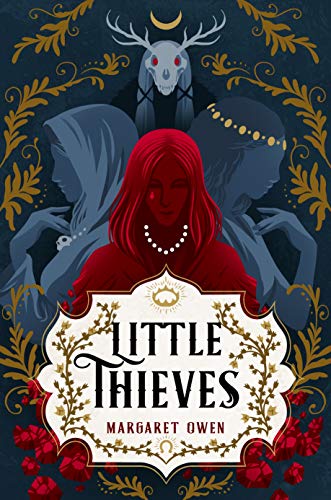 All of you readers who love feminist, progressive takes on fairy tales will love Little Thieves, a very loose retelling of “The Goose Girl,” a fairy tale made famous by Brothers Grimm. “The Goose Girl ” is one of the more macabre of the Grimm tales, which is saying a lot. In this version,the story of a maid who takes over the life of a princess becomes a magical fantasy about family, class, friendship, romance, a heist, a curse, and just oodles of magic.

This book is narrated by Vanja Schmidt, adopted goddaughter of Death and Fortune, and so we understand her motivations, which is a good thing, because she does many horrible things in the course of trying to survive. She is a compelling and sympathetic character largely because the book does so much work exposing the systems of power at play and the ways in which Vanja has been affected by her childhood and the abuse she endured as a servant in Gisele’s house. She is clever, she is imaginative, she is funny, and she has a strong moral compass buried under many layers of self-protective armour.

In fact, all of the characters in the book (with the exception of a one-dimensional villain) are fascinating and are given their own character arcs, most notably Vanja, of course, but also Gisele and Junior Prefect Emeric. Emeric is investigating the string of robberies and ends up having a wonderful romance arc with Vanja. This book is not a romance novel in the sense that romance is not the main focus of the book, but I loved the romantic element. Many side characters also have romantic arcs, several of which are LGBTQIA.

This is a book with lovely, imaginative imagery and world-building and an exciting plot. However, what stuck with me the most was the character growth and the thoughtful and hard-hitting examination of how people react to systemic and individual oppression. The author is also the illustrator and her black and white drawings are enchanting.

As the trigger warnings state, this book deals with painful topics including sexual harrassment, rape, child abuse, and abandonement. However, it is also very funny, thanks to Vanja’s snarky sense of humor and thanks to Ragne, a shapeshifter who adds a welcome note of wacky fun.

I left this book with a deep affection for the land and for the characters and with a satisfying sense of vicarious victory. Mileage will vary with regard to whether the ending is a cliffhanger or a well-wrapped up story that leaves room for imagination. I experienced the ending as the latter. If a sequel comes along, I will be ALL OVER IT despite also having that happy sigh that comes with a book that ends well. The book has some slow parts and some repetition which ends up being helpful in terms of believable character development, but which does require some investment on the part of the reader. All in all, I adored this book and look forward to many happy re-reads.

Once upon a time, there was a beautiful, kind princess who was betrothed to the prince of a faraway kingdom. When she set off for her new home, her mother gave her a maid for a companion on the journey.

But instead of serving the princess, the wicked maid stole her place.

For a year the true princess toiled away like a common goose girl, while the wicked maid lived high in the palace, fooling the kingdom. But the truth came out. The princess took back her name, her crown, and her husband, and the imposter died for her crimes.

Then one day, the wicked maid…

…told her own story.