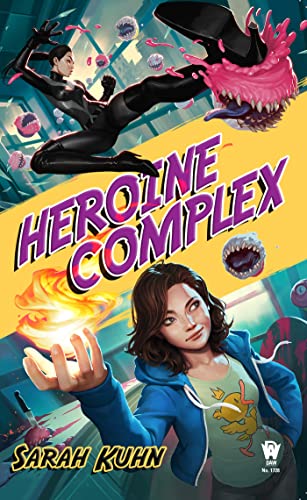 Full disclosure: I’m super fond of Sarah Kuhn because I love her writing, her Twitter feed is the best, and she owns a dress with unicorns all over it. Also I’m going to be on a panel with her at San Diego Comic-Con. So I’m biased in her favor. But bias aside, I think it’s fair to say that Heroine Complex is incredibly fun.

Heroine Complex is told from the point of view of Evie Tanaka, who is the personal assistant of a superhero. While the world knows her boss as Aveda Jupiter, Evie knows her as Annie Chang. They met in kindergarten when Annie, who is Chinese, protected Evie, who is half Japanese, from bullies. Ever since then, Evie has stuck by Annie as Annie trained to become a martial arts style heroine and adopted the name Aveda.

When Aveda sprains her ankle while fighting demonic cupcakes, Aveda demands that Evie impersonate her while the ankle heals. As Evie spends more time as Aveda, her relationships with Aveda and Aveda’s team start to change. Evie resents all she does for Aveda. Aveda is jealous of Evie’s popularity. And Evie suddenly notices that their resident mad scientist, Nate, is pretty hot. Plus, Evie has always said that she just wants to live a normal life. But once she gets a taste of being a superheroine, she’s not 100% sure about that anymore.

I wouldn’t say that this book is the kind of super literary novel that will appeal to everyone. It’s about as “genre” as possible. It’s fun, with some emotional depth to keep it grounded. For the most part, this story is about Evie’s decision about who she is, and how she wants to live.

The story is also very much about relationships between women. There’s the relationship between Evie and Aveda, of course, and Evie and Evie’s teenage sister, and Evie and Lucy Valdez (Aveda’s personal trainer). There are also the Mean Girls, Maisy and Shasta, who make Aveda and Evie’s life as difficult as possible. If you crave superhero/comic book tribute stories that are based around multiple female characters, you’ll love this. The Bechdel Test is passed with flying colors. There are only two main characters who are male, and while they are supportive of the women in their lives they never take over or save the day – they are sidekicks, not stars.

The phrase “demonic cupcakes” should tell you everything you need to know about the tone of the book. Evie goes through real emotional stuff that is relatable – her changing relationship with her friend, a new romance, her new sense of self as she becomes more independent and powerful, and her strained relationship with her sister. There’s angst. But overall, the tone is bright and goofy and fun, inspired by comic books and wuxia films.

The romance is told entirely from Evie’s point of view and it’s satisfying and solid but more so for how it advances Evie’s character development than for any other reason. I loved it that Nate supports Evie and her choices, and that he helps her grow at her own pace. I also liked it that Nate and Evie eventually realize that they balance each other well. Evie is initially annoyed by Nate’s analytical nature, but she comes to appreciate the results he can obtain by being detail-oriented and precise and methodical. Nate comes to appreciate the fact that Evie sees things differently than he does, because in doing so she basically presents him with a new set of data. Ultimately they balance each other.

It’s too bad that the word “nice” has become such a watered-down word, because at it’s core this book is nice in the best sense – not bland, or boring, or treacly, but nice in the sense that it’s about working through difficult relationships by using clear communication and commitment and teamwork and basically learning to be a decent human. Most of the people in the book have hearts of gold, even when, like Aveda, they slip up and act like jerks. Evie is often a terrible communicator, but part of her character growth involves being more honest and direct, which allows her to heal and deepen her relationships with friends and family and allows her to have a romantic relationship that is truly nurturing and healthy (and also involves fabulous sex).

Above all, the book is fun. There’s a show down that involves Evie singing “Eternal Flame” by the Bangles, for crying out loud. There are karate kicks and haunted pianos and fabulous outfits, along with some fabulously awful outfits. Evie wears neon colored underwear underneath nondescript outfits and she loves Lucky Charms but won’t eat the purple marshmallow bits. These are characters who wind down by watching all the kung fu movies that star Michelle Yeoh, and by making spreadsheets, and by dissecting a demonic thumb. It’s geek girl heaven. The characters are ethnically diverse as well as believably flawed and relatable. Those flaws can sometimes be annoying but the characters do seem to get their shit together which is fun to watch.

This book is the first of a planned trilogy. However, it ends on a satisfactory note – no cliffhangers. You usually can’t judge a book by it’s cover, but honestly you can totally judge this book by its cover, which features two Asian heroines with obviously different personalities, a demonic cupcake (can’t get enough of those) and bright colors. If that cover causes grabby hand syndrome, then yes, you will adore the book.