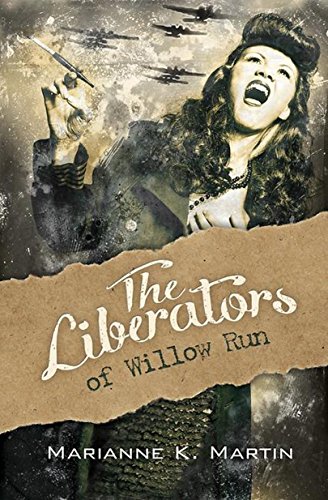 The Liberators of Willow Run

NB: We have a great guest squee review from Reader Tara Scott! The review is also perfect to tie in with yesterday’s Internal Women’s Day and our current political climate.

Tara reads a lot of lesbian romances. You can catch her regularly reviewing at The Lesbian Review and Curve Magazine and hear her talk about lesbian fiction (including romance) on her podcast Les Do Books. You can also hit her up for recommendations on Twitter (@taramdscott).

We’ve all seen the iconic “We Can Do It!” poster, famously used during WWII to recruit women to work in factories. Rosie the Riveter’s image is ubiquitous still, available on t-shirts and coffee mugs (or even bobbleheads, if tchotchkes are your thing). We’re so far removed from the events of more than 70 years ago that it’s easy to forget how essential she was, getting women out of their homes and into the workforce gaps left by men who were on the front lines. Ads asked women “Can you use an electric mixer? If so, you can learn to operate a drill.” And did those women ever answer the call. The Liberators of Willow Run is a historical romance that gives us a fictional view into the lives of some of the women who helped the United States win the war, one B-24 bomber at a time.

Audrey is the first character we meet, and her newfound independence is more precious than she can describe as she lives on her own and works as part of a high-performing crew building liberators at the Willow Run factory. Her mother can’t understand why she didn’t stay at home to wait for Bradley to come back from the war, but what her mother and coworkers don’t know is that there is no Bradley. The convenient fabrication lets her live freely without having to find a husband, hiding the fact that she’s a lesbian. She learned in the hardest way possible that secrecy is where safety lies, and yet she can’t stop the feelings that grow as she gets to know Ruth, the new waitress at her local diner. Ruth moved to Ypsilanti with her own secrets beyond also being a lesbian, and now that she’s seized the chance to live on her own terms away from her family’s expectations, she won’t let fear rule her.

Nona works with Audrey at Willow Run, and as a black woman from Kentucky, she faces more scrutiny and is cut fewer breaks than anyone else in the factory (despite having an incredible attitude and being more precise at the job than most). She’s got a plan, buying war bonds as quickly as she can to pay for the degree that will let her follow her dreams of becoming a teacher. Her friendship with Audrey enriches life for both women, but some rules can’t be broken, no matter how unjust they are.

The Liberators of Willow Run has a lot going for it, and all of it is good. The writing is simple and elegant, bringing the era to life without ever resorting to info dumps and I found myself savouring Marianne K. Martin’s phrasing. The book also perfectly captures a moment in time that was very difficult and yet in some ways almost magical for some women because, for once, they were allowed out of the few specific roles available to them and were able to earn money and live independently if they chose. The difference when the war is over and Audrey is working wherever she can is heartbreaking, showing just how special it was that women were as essential as men to the war effort.

Although a good chunk of the book takes place with Audrey and Ruth apart, their romance is so carefully and delicately drawn that it’s beautiful to watch unfold. Audrey is understandably afraid, given how her last relationship with a woman ended, and yet Ruth’s courage and understanding props her up. Ruth is the perfect partner for Audrey, meeting her exactly where she’s at and only nudging where appropriate. I imagine them as a formidable couple for decades to come, quietly loving each other while making a difference in their community.

Discrimination is also examined from several angles. Nona faces it many times for her race, both at and outside of work, which is in stark contrast to the bigotry that Audrey is able to opt out of by hiding her identity as a lesbian. Nona almost loses her job because her ride to work didn’t show up one day and she can’t eat at the diner with Audrey (or anyone). Audrey, on the other hand, can pass easily through any situation simply by keeping her mouth shut and occasionally making mention of Bradley. Like Audrey, Ruth can carefully choose when or even whether to reveal that she’s a lesbian, as well as the secret of where she was before she moved to Ypsilanti. During that time, at a home for unwed mothers, we also see the judgemental attitudes faced by women who were shunted aside by their families for the sake of reputation, whether it was their own choices that landed them there or not. That alone occasionally left me shakingly angry, although I have to tip my hat to the author for handling such difficult material as gently as she did.

With discrimination against people of colour and the LGBT community seemingly legitimized by the current administration in the US, The Liberators of Willow Run feels like a very timely book. The fear and frustration that many people are feeling now is not new, and examples of quiet resistance like we see with Audrey, Ruth and Nona are more important than ever. This is a book that brings hope and a well-earned happy ending in a time when we need it, and it’s more than worth the read.

The Liberators of Willow Run by Marianne Martin