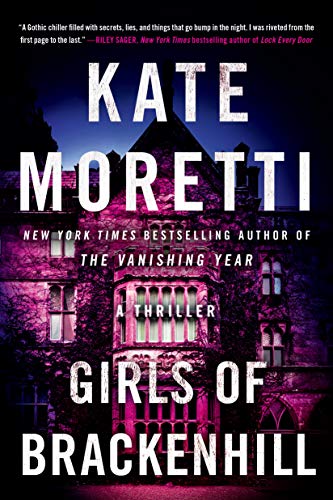 Girls of Brackenhill is the kind of Gothic thriller that I love. It’s got supernatural elements, a house that functions as a character in its own right, and an unreliable narrator. This book would have been a solid A except I found the ending a little bit too vague to totally satisfy me. It was so spooky-good that I immediately popped in the mail for Amanda.

Hannah Maloney gets a late-night call that her aunt died in a car accident. With her uncle in in-home hospice care, it’s up to Hannah to deal with her aunt’s legal affairs and make long term arrangements for her uncle who is essentially comatose.

Hannah’s aunt and uncle live in a castle, Brackenhill, in the Catskills. Growing up Hannah and her sister, Julia, had an unstable home life and spent summers at Brackenhill. For Hannah this was a respite from an abusive stepfather and emotionally distant mother. Then, the summer she turned seventeen, Julia disappeared. Her purse was eventually found along a river and she has long been assumed dead.

So for Hannah, Brackenhill went from a place of refuge to one of trauma. She’s spent her entire life believing Julia ran away. Then Hannah’s dog digs up a human jaw bone on the property and she’s forced to contend with the idea that Julia might have met with foul play.

The novel bounces back and forth between the present day and the summer Julia went missing. The chapters that take place in the past offer the reader the ability to scrutinize events that a fifteen-year-old Hannah might have overlooked or been unable to place into context, hence my assertion that she’s an unreliable narrator.

Young Hannah is obsessed with her new boyfriend, Wyatt, who is eighteen to her fifteen. Wyatt doesn’t want to be open with their relationship because of the age difference so they meet secretly. Hannah is so involved in their romance that she writes-off changes in her sister’s personality and strange behavior from her aunt and uncle. Knowing what will happen to Julia, the reader can see those things in a different light. Wyatt also makes an appearance in the present day as a police detective, allowing for a romance subplot.

There is definitely a supernatural element to this book. Brackenhill feels haunted and malicious. At one point the pool water turns blood red. In one of the creepier scenes, Hannah and Julia are exploring the basement which is segmented into several maze-like rooms. It seems no matter which way they go the rooms shift, never allowing them to come back out where they expect to be. In terms of scariness, on a scale of one to ten with ten being that time I actually screamed out loud watching The Haunting of Hill House, I’d put this book at a five.

There are two big twists in the book, the last one I didn’t see coming. It relates to what happened to Julia and while I thought it was unique, it is more suggested than definite. I felt like there was room for more closure at the end and I wasn’t a huge fan of the vagueness of the finale. Despite that I really enjoyed the journey to get to that ending. Girls of Brackenhill is spooky and thrilling and contains all the Gothic elements I love. It’s a fun read for your dark winter nights.

Girls of Brackenhill by Kate Moretti