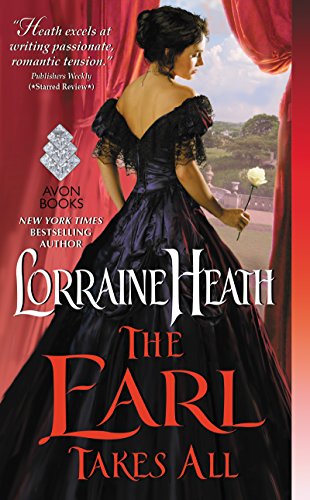 The Earl Takes All

This was one of Sarah’s picks for this month’s Hide Your Wallet, and boy howdy, was it cringey. (Sarah: “DAMMIT.”)

Edward, younger identical twin brother of the Earl of Greyling has come home from a trip to Africa where his brother has been killed in an accident. Instead of coming home as Edward, though, he’s pretending to be his brother (Albert), because Julia, his brother’s wife, is pregnant, and Albert, as he lay dying, told Edward to pretend to be him so Julia wouldn’t get so upset that it would cause a miscarriage. (She’s had multiple miscarriages before, so they feel this is a legit concern.)

Of course, Edward has had ~feelings~ for Julia since his brother started courting her, but he’s tried to cover those ~feelings~ up by being kind of a dick, and also he travels a lot so he’s often out of the country. When he comes back posing as Albert, Julia feels like maybe there’s been a big change in him, but chalks that up to, “they’ve been apart for two months and he’s had experiences in Africa that changed him so…. he’s just being weird.” It doesn’t occur to her that it might be Edward because WHO DOES THAT.

Of course, posing as Julia’s husband puts Edward into some awkward situations that he doesn’t entirely hate, and he has to throw himself on the near sexy-times sword or she’ll know that he’s not Albert, right?

Sarah’s comment on this was, “The plot summary lines up a bunch of serious obstacles to the happy ending, so I’m very curious how it’ll be pulled off.”

It’s pulled off (kind of) with a LOT of cringes on my part. There’s a thing with twin-switch books that always concerns me: the hero and heroine cannot have sex until AFTER the reveal. It’s a consent issue. Julia would be consenting to sex with Albert, not Edward. Never mind that she had no real reason  to think that this wasn’t Edward. HE knew what she was doing and it’s just icky. Now, they don’t ACTUALLY bang until after the reveal, but they get DAMN close (like, the reveal happens mid-foreplay) and I was cringing because it was horribly awkward and kinda rapey.

Edward doesn’t really have an exit strategy. He’s hoping that the baby will be a boy, so he wouldn’t ACTUALLY be the new Earl, and once the baby is born, he’ll tell her and then….he’ll go away? He is hamster-wheeling trying to figure out what to do, which is complicated by the fact that he REALLY likes being around Julia and likes having an excuse to make out with her.

The other complication thrown into the mix is that under British law at the time, a man could not marry his brother’s widow (nor could a woman marry her sister’s widower). It was considered incest (at least legally). So even when everything comes out in the open, there’s still another HUGE obstacle to an HEA.

I’m not gonna lie, and I feel like I need to apologize for this: I was legitimately concerned, after all of the discussions we’ve had online over the idea of the HEA not being mandatory for a romance (Uh, it is), that maybe this would be a book without an HEA. I should have had more faith. I should have. But I was scared.

Show Spoiler
The legal solution is kind of a “Oh, here’s a work-around” but that’s honestly the answer to a lot of legal problems (and the fact that the easiest work-around is only available to people with a large amount of disposable income is pretty accurate, too).

The problem of how Julia can forgive Edward for the MASSIVE lie he’s pulled on her is solved in a manner that’s less believable. Yes, she had feelings for him (that she hid behind disdain) and he had feelings for her, but it seems like she just needed a few weeks to go, “Well….. okay, lets give this a shot.”   It also helps that Albert basically gives them both permission, but EDWARD FUCKING PRETENDED TO BE HIS BROTHER FOR MONTHS. WHY WOULD YOU FUCK THAT GUY.

Look, a small part of the C- grade is a casualty of the HEA war. If I hadn’t been scared of not getting an HEA (which, to be fair, there’s never been any indication that Heath would do that) and if I wasn’t spending time being worried about it, I would almost certainly have enjoyed it more. There are plenty of times where I’m not sure how the conflicts will be resolved but I know it will be, and that the resolution will make sense, so I can enjoy the journey (Milan’s Unveiled comes to mind).

I enjoy Heath’s writing, and she makes interesting, layered characters, and maybe upon a reread when I am not worried about if I’m going to get my promised HEA or not I’d enjoy this more. But the cringeworthyness of the whole twin-switch/consent issue is a HUGE obstacle, and I’m not sure I can get beyond that.

The Earl Takes All by Lorraine Heath