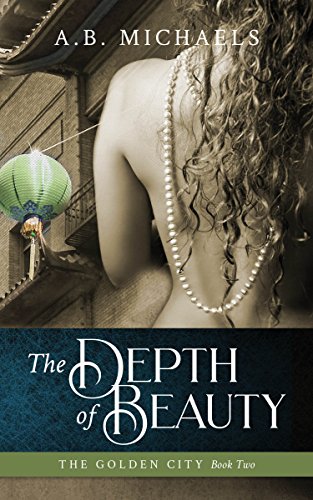 The Depth of Beauty

This RITA® Reader Challenge 2017 review was written by Erika S. This story was nominated for the RITA® in the Mainstream Fiction with a Central Romance category.

In 1903 San Francisco’s Chinatown, slavery, polygamy, and rampant prostitution are thriving— just blocks away from the city’s elite, progressive society. Wealthy and well-connected, Will Firestone enters the mysterious enclave with an eye toward expanding his shipping business. What he finds there will astonish him. With the help of an exotic young widow and a gifted teenage orphan, he embarks on a journey of self-discovery, where lust, love and tragedy will change his life forever.

A stand-alone novel, The Depth of Beauty is the latest addition to the dual genre series “Sinner’s Grove,” which chronicles the family and friends of a world-famous artists’ retreat on the northern California coast. The stories follow both historical and contemporary tracks and can be read separately or together for greater depth. Other titles in the series include the award-winning The Art of Love, Sinner’s Grove and The Lair.

NB: Trigger warnings for the below description racism and threat of rape.

Well, I picked this book to review because I was late to the sign-up sheet and it was the only book left. Which wasn’t maybe the best sign, but you never know with these things, and part of my idea with this challenge was to get out of my comfort zone and try something new.

Set in San Francisco in the early twentieth century, the book follows Will Firestone, the eldest son of a prominent San Francisco family as he … does some stuff, I guess. Part of the story involves him becoming a better person by getting to know the Chinese immigrants living in Chinatown and learning about what it’s like to not be rich and privileged…soo, yeah.

He meets and falls in love with Tam Shee Low, a gross stereotype of a Chinese woman with bound feet (which he is super patronizing about). Later, Will slowly discovers feelings for Mandy Culpepper, a farm girl his sister adopts at age fifteen after her father is killed on Will’s job site.

I’m going to be honest – I didn’t finish this book. It was so long and so bad! Honestly I almost gave up right at the beginning, maybe twenty pages in, when Will first meets Mandy. Meetings are supposed to be a big deal in romantic stories, no? Anyway. Will goes to visit the family who have taken Mandy in after her father’s death. The wife (who might have a name? I don’t know) wants Mandy to stay and help her take care of their young children.

The husband, Dell, asks to speak to Will privately – he has a man thing to say:

Look, I’m a God-fearin’ man. I got a pretty little wife and three good kids. But I’m human. And the Good Book says we got to keep ourselves away from temptation whenever we can. We got to put up guardrails against the Devil. I’m not sayin’ Mandy’s the Devil, I never would. But I’m sayin’ you can’t spend too much time with her and not see how doggone beautiful she is.

The girl, by the way, is a fifteen year old who has just lost her father and is now a homeless orphan. Who has showed no interest in Dell. So I’m pretty sure what Dell is saying here, ultimately, is get this girl out of my house or one of these days I’m just going to rape her on account of her bein’ so doggone beautiful. Gross, Dell.

Now, I’m going to be honest here and say that I actually love romances with a hot older dude. I even love those slightly old-school guardian-ward romances (sorry). But they only work for me when the hot older dude is appropriately angsty about whether the younger heroine will want to be with a man so much older than her, and where he does everything in his power to minimize the power differential between them. Also he has to be hot and compelling as a character, so … yeah.

Mandy herself comes off as a ridiculous stereotype of a country girl with some sort of a running thing about chickens, only later in the novel turning into a frustrating Mary Sue-type character, beautiful and all-capable and totally devoid of flaws or characterization generally. She has a first-person journal running through the book, which adds little and mainly reviews events that have already happened.

And then there is Tam Shee Low, the other point of the love triangle, and the gross, racist, White Saviour garbage that taints all of Will’s interactions with her and literally every other Chinese character. Will meets Tam Shee through a businessman named Cheung ti Chu, a sleazeball who wants Tam Shee as his second wife. Cheung manufactures a reason for Will to meet her so he can show off his hot, submissive future wife. Instead, Will decides to save her, and sets up some kind of sewing school for Chinese girls so that Tam Shee can be an instructor and not have to marry Cheung. Then he falls in love with her, while also worrying if their two spheres can ever meet, what with her … not knowing about Christmas. For realsies (also, he just assumes she doesn’t know about Christmas, he doesn’t do anything crazy like ask her about it).

The Chinese immigrants of Chinatown are exoticized and othered in every page of this book. They are prostitutes and Chinese mafia lords and opium addicts and polygamists and slave owners – unless they are the beautiful and helpless victims of such, in which case they just need to be saved by the friendly Mission lady and/or Will Firestone. The white inhabitants of San Francisco are Hollywood-style racists, who denigrate the Chinese and threaten to demolish Chinatown entirely. Unless they are Will Firestone and friends, in which case they are the only ones who can save Chinatown for its colourful, exotic inhabitants.

Don’t read this book. Seriously. It’s boring, it’s racist, all the characters are horrible. It’s long (479 pages) and it feels even longer. It’s not even bad in that so-bad-it’s-good way, where it’s bad, but at least you learned a new, fascinating way a book can be bad (like with dinosaurs!). It’s just bad. I tried to finish it – I tried so hard for you! I got shockingly far too, thanks to a whole lot of skimming. But it was grim, and I seemed to be getting no closer to the end, and I imagined myself like, reading and reading and hating every moment and never finishing, like some kind of literary Sisyphus. So I stopped. Don’t let my sacrifices be in vain! Don’t read this book.

The Depth of Beauty by A.B. Michaels