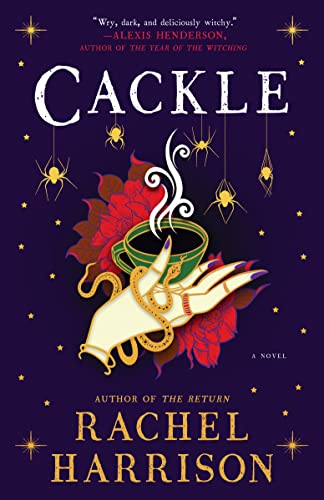 Cackle is a feminist and creepy yet cosy read that asks us to explore the boundaries between an empowering friendship and a toxic one. Annie (our protagonist) finds some of both in her relationship with Sophie, a glamorous, elegant, mysterious woman, who lives in the small town of Rowan.

This book is narrated by Annie. She has lived in New York City for over a decade, but for the past ten years she was in a relationship with Sam. All you need to know about Sam is that at one point he says, “It’s hard to be attracted to someone in pajamas.” People, life is too fucking short to waste it on a man who can’t appreciate warm, soft, cosy flannel. Sam eventually breaks up with Annie, which, for Annie, is a devastating development. Annie can’t afford to stay in New York so she takes a teaching job in the rural town of Rowan.

Annie is grieving from the break up, which is especially painful because at Sam’s insistence they remain ‘friends,’ calling and texting each other every day. Although there’s no clinical diagnosis offered in the book, I’d venture to say that Annie is depressed and probably has some other psychological issue going on. Since adolescence, she has felt a need to have a boyfriend at all times, and she builds her personality around the boyfriend of the moment and isolates herself from other people to devote herself fully to the relationship. By the time Sam dumps Annie, has forgotten who she is without him, and can’t picture being happy without being in a relationship, preferably with Sam.

I’m talking about this a lot not just because it’s part of the plot but also because one of the strengths of this book is how much it NAILS that “we’re broken up but kinda not but mostly yes” entanglement that comes with the “Let’s still be friends” limbo. Sam, a master gaslighter, constantly refers to the breakup as having been mutual, which it certainly was not. On the other hand, Annie is quite an unreliable narrator herself, and may just possibly have isolated Sam from his friends and over-idealized the relationship. So the narrative does a great job of showing how dysfunctional both people are and how messy and agonizing the “we lived together for ten years but now we don’t and also you call me every day but also we aren’t together” morass is. Obviously, this book is NOT a romance novel.

Annie needs a friend in the worst way, and along comes Sophie. Sophie is elegant, glamorous, gorgeous, rich, and exciting. Sophie showers Annie with affection, nurturing, and encouragement. Sophie LOVES not being in a sexual or romantic relationship, and encourages Annie to revel in her freedom. She gives Annie presents and washes Annie’s dishes. She lives, I shit you not, in a castle in the woods, where she dresses Annie in silk pajamas (pretty sure even Sam would find those to be sexy) and feeds her cake. Sophie also seems to strike terror in the hearts of the townspeople and her castle is haunted and she curses people. But that doesn’t have to be a problem for Annie, right? RIGHT?

I love the push and pull between the idea that Sophie is good for Annie and the idea that Sophie is as toxic as this weird tea that she tricks Annie into drinking. Sophie helps Annie tap into her own rage and her own power. She helps Annie savor certain aspects of being single, like having cake and booze for dinner and basically doing whatever one wants to do, whenever one wants to do it. But Sophie doesn’t want Annie to be independent – Sophie wants Annie to be Sophie’s very bestest friend who will do whatever Sophie tells her to do. It’s fascinating to watch how Sophie, in giving Annie the confidence she needs to stand up to Sam, also accidentally gives Annie the confidence that Annie needs to stand up to Sophie.

The writing is fun, funny, sometimes scary, and by turns lyrical and gory. I’m terrified of spiders but would have died for Ralph, a large spider whom Sophie loans to Annie when Annie is particularly lonely:

I made him a tiny bed frame out of a cereal box. It’s got a tall headboard and a sponge for the mattress. I covered the headboard in orange construction paper because orange is his favorite color. I covered the sponge in an old pillowcase.

He also loves to watch TV with me. I’ll let him use the remote, pick whatever he wants. He particularly enjoys HGTV and home-makeover shows. Also, cooking competitions.

Most of this isn’t scary so much as it just feels…wrong. Annie is constantly looking around her with disquiet. She keeps asking sensible questions, like: is it really OK that her enemies are cursed in bloody and terrifying ways? If Sophie is so wonderful and kind, why is everyone in town afraid of her? If Sophie is such a great pal, why does Sophie spy on her and lie to her and expose her to murderous ghosts? And of course, Annie is constantly being gaslit by Sophie, by Sam, and even by herself. I mean, surely the constant threat of being murdered by a ghost is worth having cake and booze for dinner, right?

I loved this book as a psychological exploration of liberation versus control. However, there are some things that were introduced as points of tension that never reached a peak state. I expected all this tension to erupt into a cathartic showdown. I thought there would be more happening with the spider theme, for example, and with the angry townspeople. However, the book never goes that route, sticking with a more calm and matter-of-fact resolution. I feel that I will have to read the book several times before I decide whether the ending is a happy one or not, meaning that this book delivers a consistently unsettling feel and also made me think a lot.

In approaching this book, I suggest one think of it more as a coming-of-age story about the nature of friendship and independence and less as a horror story. For horror, try the author’s previous book, The Return. This book is more like a pumpkin spice latte (I LIKE pumpkin spice, sue me) spiked with something just nasty enough to give it a bit of a kick. I enjoyed it and expect to read it more than once. Also, it made me super hungry, so maybe have some cake handy when you read it.