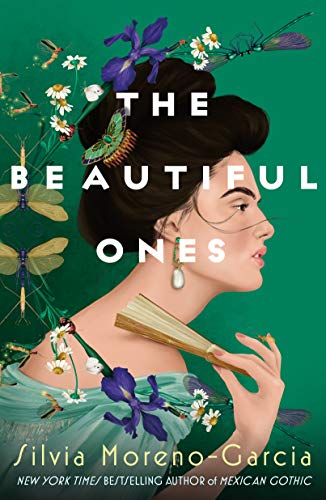 The Beautiful Ones is a book that includes many genres, including fantasy, romance, manners, and just a little bit of Gothic. I enjoyed it more as a soap opera than a romance, but your mileage will vary depending on your interpretation of the characters.

The setting is an alternate world in which some people have telekinetic powers. It takes place during the Belle Époque (anywhere between 1871-1914). Loisail is the Big City where the upper classes enjoy the Grand Season. There’s nothing mystical about Loisail – the only fantasy element in the book is the telekinesis. During the summer, people go to their country estates where the weather is cooler and manners a bit looser.

Once upon a time, a performer, Hector, fell madly in love with an upper-class girl, Valérie. He went across the sea to earn his fortune and she promised to wait for him. However, her family, which had status but no money, pressured Valérie to marry a rich man, Gaetan. Ten years later, Valérie is the undisputed queen of the Season. She’s rich, she’s beautiful, and she’s great at manipulating people. She finds her husband to be terribly boring and avoids him as much as she can. She’s what Heather Chandler (from Heathers, of course) would have grown up to be if she lived in the Belle Époque and stayed away from drain cleaner.

Meanwhile, Hector became a famous performer whose money and celebrity have earned him a place among the elite. Now that he has made it big, he shows up to work out his broken heart issues. He figures he will see Valérie and he will automatically know what his next move is. And behold – into his life walks Antonina, Valérie’s younger country cousin! Hector, who is just the worst, courts Antonina (Nina, for short) to make Valérie jealous. Valérie, who is also just the worst, is a hell-bitch to Nina, who just wants to study beetles and wear comfortable shoes, but who gradually falls in love with Hector.

So eventually shit goes down, and there’s a time jump to the next Season, and Hector The Absolute Worst decides that actually he really does love Nina. Nina is all “Bitch, please,” but Hector The Absolute Worst wins her over. Valérie The Other Absolute Worst plots to ruin Nina’s life because she’s jealous that Nina has choices that Valérie never had. Valérie’s plot involves getting Nina to marry one of Hector’s friends, Luc. So by the climax of the book we have, counting Gaetan, a love pentacle, only some of the people aren’t sure whether they love each other, hate each other, or just want to get rich.

I can definitely say this novel works as a Gothic novel of manners. I’m using “Gothic” because it feels Gothic to me with all the secretive plotting and dramatic conversations and breaking of expensive items. In addition, I can’t think of people wooing their relatives without thinking, “Gothic alert.” I kept expecting one of those kids from Flowers in the Attic to show up, or the entire cast of Crimson Peak. Of course, historically it hasn’t been unusual to marry a cousin, but the relationship is played up in the book to highlight how tangled these people’s social and romantic lives are. Other than that, it’s not very Gothic and nor is it very fantastical. The telekinesis mostly comes into play to create a common bond between Nina and Hector the Absolute Worst. The society scheming was top notch.

Whether or not this will work for you as a romance novel depends on:

I liked Nina, who over the course of the story goes from being a naïve girl to a mature woman. Even before Hector shows up, Valérie hates Nina because it is Valérie’s job, as an older and highly placed relative, to turn Nina into a young lady who can find a suitable husband during the Season. Nina can’t or won’t learn social graces, which drives Valérie right up the wall. The (slightly) older Nina has more poise and more depth as a character but retains her love for the country, for beetles, and for communicating directly instead of in code. Her forthrightness cuts beautifully through the coded insinuations of everyone else.

Whatever genre you call it, the story is compelling. I read it with the same rabid avidity with which I eat a bag of chips. Did I mention the clothes? So many clothes, plus descriptions of beautiful rooms and interesting backstage areas, and so forth. When it comes to setting and description, this book is wonderful.

This book did not work for me, personally, as a romance, because my cold heart does not accept the reformed Hector. However, it absolutely worked for me as a kind of historical soap opera with fantasy elements. Grading it on those terms, I give it a B+.

The Beautiful Ones by Silvia Moreno-Garcia