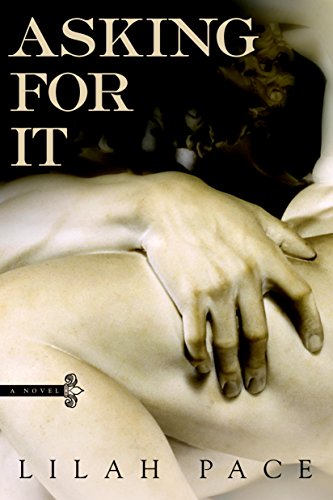 So… trigger warnings for sexual assault and talk of non-consent.  We’re not kidding about that.

Asking For It is about Vivienne, who has a very specific kink- she can only orgasm when she is pretending that she’s being raped.  This has caused problems in relationships and her general well-being, and when an ex-boyfriend drunkenly and loudly apologizes for not being able to give her what she wanted at a party in front of people, Jonah overhears and tells Vivienne that he might be able to give her what she wants, because he has the complementary desire- to force a woman without actually raping her.  They embark on a long and twisty path about figuring out boundaries, methods, and scenarios, and what makes them work and not work.

This is a book that’s been getting a lot of buzz- people have been talking about it for months at this point, and there were many conversations being had at RT about it.  Amanda and I both read it, and had a lot to say.

NB: What follows is a conversation that doesn’t spoil the major plot points but does talk in detail about scenes that happen once the hero and heroine get together. Our goal here is to help you decide whether you want to read a book that a lot of people are talking about. So consider what follows this point a medium-level spoiler. We want you as a reader to be knowledgeable about what you read and we don’t want you to be surprised or upset, so there’s a bit more detail in this conversation than we might otherwise include in a review in this format.

RHG: Well that was a ride.

RHG: So where should we start?

Amanda: That’s the million dollar question because all I want to do is just furiously bang my fingers against the keys to form a string of nonsensical words. But I think our preconceptions going into it would be a good start and how the book either met or destroyed those notions. Because admittedly, I was very nervous about reading this book.

RHG: I was intrigued because I have read a lot of non-con fantasy books that work in varying ways, but they’re explicitly fantasy, and not structured around “is there some way to realize this fantasy in the real world that is safe, sane, and consensual?”  And the fact that Pace was attempting to do just that, it’s a high level of difficulty.

Amanda: So…I’m a victim of sexual assault. That is a thing that happened. I’m not particularly triggered by non-consensual scenes, but I try to avoid them when I can, which is why I’m usually so critical of books that use non-con as a plot device or backstory. My main fear was that the non-con aspects of the book, both in a consensual sense with Jonah and a non consensual sense with Anthony, would be…porny in a way. Like in movies, with a non-con scene, it often lacks the brutality of the act and is done from a male gaze point of view.

But the scenes with Jonah, I never once got the sense that the heroine, Vivienne, wasn’t a willing participant. Pace definitely nailed the psychological aspect of both spectrums.

RHG: Right.  I mean, Vivienne was outed as someone with this kink against her will, which sucks, but it worked out.  And Jonah definitely had put thought into how he could realize his distaff version of the same kink, if he could find someone who was into it.  How much thought he put into it is why this set up works- Viv’s ex (Geordie) couldn’t put that much thought into it because the whole idea squicked him so much, and she was so wrapped up in a shame spiral over it that figuring out logistics was not on her radar.

Amanda: I thought there was a very interesting scene with Viv and her therapist, Doreen, and Doreen brings up the fact that this kink could have happened regardless of her experiences. And Viv kind of loses it a little bit because she thinks, what well-adjusted, normal person would find rape fantasies appealing? No clue why I brought that up, but that scene is one that’s sticking with me.

RHG: I finished the book about a month and a half ago, and that scene still sticks with me.  That was the point at which I went “Okay, Pace knows what she’s doing.”  I was concerned (in a Tim Gunn kind of way) that we were going down route of “rape will cause you to want to be raped” and that’s not how that works.  And the fact that she explicitly said, in the words of a psychological professional, that it’s not the case made me SO relieved and so impressed that Pace knew what she was doing.

I have no issues with how Vivienne and her desires are handled, not one.

“Anthony raped you,” she says. “The fantasy comes from that, and from a culture that eroticizes violence against women, and leftover puritanical guilty about sex that tells us we’re not allowed to choose it and want it for ourselves, and from God only knows where else.”

Amanda: Same. My issues with the book, however infrequent they may be, lie more with Jonah’s characterization than Viv’s. Because I still don’t know if I can take his “big reveal” seriously. I just have mixed feelings about the “fucked up rich family” trope.

RHG: I get how difficult it was to come up with a hero who is willing to give Vivenne what she’s asking for (see what I did there) because he has the distaff kink, but not make it “he wants to rape a woman” (because he is the hero, after all).  That’s a REALLY high level of difficulty.  But to have it tied back to that level of childhood trauma just… didn’t work for me?  I don’t think it landed as well as the author needed it to.  Again, I get that she needed something there that didn’t make him a character who thinks, “I want to rape a woman and not go to jail” but still.

Amanda: Agreed, his justification didn’t quite fully explain his desire for this particular kink, and maybe that was intentional. There’s still more books to come. And horrible things happen to children. Unspeakable things. But Jonah’s trauma is one of the only things that took me out of the story for a few minutes. Maybe if it wasn’t so..severe, it would have worked a little better. I mean, I honestly don’t have any real suggestions because I sure as hell couldn’t do what Pace did.

I really like how she was super specific about their triggers- when they met and discussed the logistics, Viv gave Jonah a few specific things she did not want him to do, and he did the same.  And when he did something that triggered her that she hadn’t realized would do it, and she called the safe word, he stopped and immedietly recognized that it wasn’t something he’d done purposefully, but that it was in her head and he needed to be there in the way she needed him.  That scene was both upsetting (out of empathy for her) and sweet (because it underlined how concerned he was for her, and I’m not sure she realized fully that he was until that happened).

RHG: Especially when those boundaries show up out of no where.

What did you think of the other characters?

Amanda:  Viv’s family are nothing but horrible garbage people. And then Geordie—the scene toward the end where Viv confronted him about his drinking problem seemed a little out of the blue because we only see him get carried away with alcohol once throughout the book.

But Viv’s close circle of friends, I actually liked. I have this preconceived notion of Texas that I definitely stereotyped and found it difficult to imagine such a diverse group. But then I realized I was being stupid. It’s a university setting. And a large one at that. International students aren’t uncommon. And it’s in Austin, which as they described in the book is the “bluest city in the biggest red state.”

RHG: Her friends where all so vividly drawn, even as minor characters, and her family- oh my god, so terrible.  Honestly people, when one of your grown children wants to deal with you as little as possible, ask yourself why.

Amanda:  The South has a different set of cultural mores. Shitty traumatic things can often be ignored because of a pride thing (e.g. the mental illness in my mother’s side of the family). You don’t talk about certain things; you don’t deal with certain things. And a lot of that culture is projecting and protecting this “everything is perfect” image. Obviously, we’re sane, (somewhat) normal ladies, so it’s natural for us to understand something is amiss when someone is choosing not to have contact.

But seriously. Fuck that family.

RHG: Anything else you want to talk about?

RHG: I want to give a qualified A- given that this isn’t going to be for everyone, and that misstep with Jonah’s background.  For the people this is for, it’s great.  If this ain’t your thing, it’s really not going to be your thing.

Amanda:  I’d agree with the A- minus assessment as well. It’s okay if readers know this isn’t for them. But if someone’s slightly curious, I’d definitely recommend giving the first fifty or so pages a try. And I definitely regret not starting the book sooner. Why did I wait so long?!

Asking for It by Lilah Pace