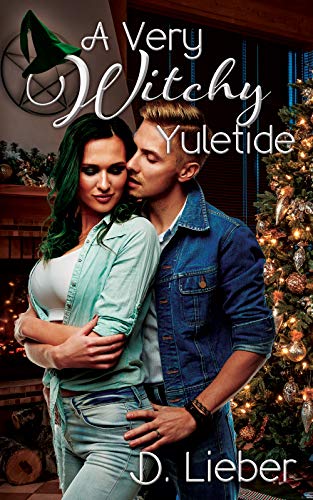 A Very Witchy Yuletide is a romance that offers both realistic Pagan representation and #ownvoices representation of being legally blind. As an Atheopagan (one of the many, many subsets of Neopaganism) I enjoyed the realistic portrayal of a Pagan Yule. However, the romance is pretty bland and I felt that in discussions of discrimination against Pagans, the characters, most but not all of whom were White, cisgender, and heterosexual, failed to adequately recognize their own privilege.

Incidentally, I would use Neopagan to describe myself and the characters in this book, but for simplicity and because the book uses the term ‘Pagan’ that’s the term I will be using in this review. ‘Neopagan’ just means a modern-day Pagan, recognizing that we are inventing or re-discovering a lot of our own practices.

This story is about Evergreen, a young woman who is about to graduate from college, and Sawyer, who works at a wildlife refuge. For reasons I did not understand Evergreen is called Eeva by her family (yes, two ee’s). Her parents own a lodge and run retreats there, and they have invited everyone from the old coven/group of friends to stay there and celebrate Yule together. Sawyer and Eeva apparently had a mutual crush on each other before Sawyer left, but neither of them contacted the other or said anything about it so now they are all longing looks and brooding.

I can’t speak to the realism of how Eeva handles her challenges with vision or how others react to them, but I loved the fact that the book doesn’t directly address Eeva’s blindness (her word) until several chapters in, instead showing how she navigates the world and concentrating on other aspects of her character. This makes blindness one of her many traits instead of a dominant or defining trait. By the time she talks about it in detail, the reader already thinks of her as a Pagan girl who loves her family and her cat and who is worried about getting a job after college and who is also blind, as opposed to “the blind girl.”

When I say this book is realistic in Pagan terms, I mean that the celebration of Yule is spot on, and no one has an orgy or flies on a broomstick or practices magic in a high fantasy style. Yule, also called Winter Solstice or Yuletide, is a Pagan holiday in which we celebrate the turning of the Wheel of the Year towards shorter nights and longer days. Different Pagans celebrate differently but all of the practices in the books are common ones, including lighting a Yule Log, decorating a tree, exchanging gifts (preferably handmade or ecologically responsible), giving to charity, feasting, and staying up all night to welcome the sun at dawn.

It was lovely to see Pagans doing the things I’ve actually seen them do. As much as I love reading a good urban fantasy or paranormal, we really don’t spend our time floating in the air like they do in The Craft although my goodness who wouldn’t want to? Actual Paganism is much more prosaic and while Pagans love to argue about magic and whether it works and if so how, it doesn’t look like this:

It took me a while to figure out why, with all this realism in terms of activities, their gathering felt so fantastical. Then it clicked – there are NO arguments! This is first of all, a large group of people, many of whom are related, sharing close quarters for several days. I don’t care what religion a family practices, if they all come together in one building for the space of multiple days there WILL be squabbles even if this family is a lovely, well-adjusted one composed entirely of people who have had a lot of therapy (and if you know of a family like this, please direct me to them).

Secondly, Pagans LOVE to argue. We disagree about EVERYTHING. The group in the book that meets for Yule is an eclectic group which means that everyone expresses their Paganism somewhat differently. I guarantee you these people in real life will be having passionate arguments about every aspect of Paganism and Yule. The topic of “Should we open presents and have a big dinner on Christmas, you know, for Grandma’s sake?” alone can keep Pagans busy for many happy but agitated hours, believe me.

My extended family isn’t Pagan, but since I’m part of a large family and have been part of a coven I believe I can tell you how this retreat might really go. For instance, in this book, the family brews some non-alcoholic mead in the kitchen (YES PLEASE) and puts out both carnivore, vegetarian, and vegan food options. In a group which includes vegans and meat-eaters, is this story seriously saying that, for example, no carnivore will make some unprovoked crack about the vegans, and that the vegans won’t respond by saying, “Look, I wasn’t going to say anything, but since you mention it, ‘an it harm none’ should apply to our animal friends” and this will in NO WAY escalate into a passionate discussion about the ethics of mead which is made from honey and thus exploits bees and ultimately inspire a major meltdown about a childhood incident that took place twenty years ago? Please. No family, and no group of Pagans, let alone a combination thereof, has ever gotten along this well for this long in the entire history of time.

As far a romance goes, good lord, I’ve never met such basically decent but incredibly irritating people. Eeva and Sawyer have no reason not to have been together for the last several years except for mutual low self-esteem, mutual refusal to take any chances, and mutual terrible communication skills. At least they have some things in common. The romance is both boring (Eeva and Sawyer are not memorable or interesting) and frustrating (the only conflicts stem from them failing to communicate the most basic things). For example, a major tiff is caused when Eeva sees that Sawyer got a text from a woman. Instead of assuming that it’s a friend, or better yet, ASKING him about it, she assumes he has a girlfriend and spends a day not speaking to him. I lack the patience for this kind of behavior. Communicate, people.

My other issue with this novel is the repeated emphasis on the discrimination that Pagans face. I wrestled with this one, because Pagans sometimes do experience a lot of discrimination, especially in the workplace, in communities, when trying to adopt children or in custody cases. It’s a serious issue that deserves to be addressed. However, Pagans/NeoPagans today are being challenged, and rightfully so, to confront racism, as well as ableism and homophobia and transphobia, within the Pagan community. While the novel has a couple of supporting characters who are non-White and who are gay, most of the characters present as White, cis-gendered, and heterosexual, and they seem to reside in areas that are friendly enough to have Pagan supply stores. Although there is mention that Pagans need to combat injustice in all forms, so much emphasis is placed on discrimination against Pagans, and so little on discriminations BY some Pagans against others, that it seemed inappropriate to me at this time in history. These characters absolutely have the right to demand religious equality, but they also need to check their privilege.

With so little conflict, the book is dull, and with so little communication, the book is annoying. With so much focus on discrimination, the book feels oblivious to the privilege experienced by the characters given how much time they spend complaining about discrimination with only passing mentions of the kinds of discrimination faced by other people. This is just not a time in history in which I have the patience to listen to cis-gendered heterosexual White people complain about other people being mean to them. Although this book was cozy in tone and it was fun to see a large group preparing for the holiday, it didn’t work as a satisfying story for me.