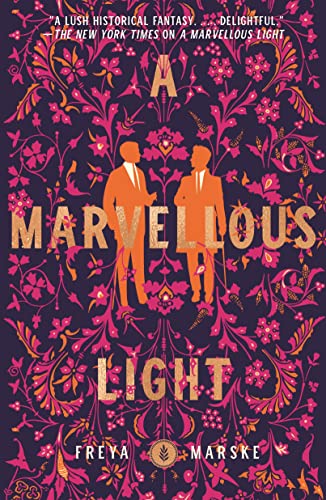 A Marvellous Light is a slow-paced, M/M fantasy romance set in the Edwardian Age, and is the first of a trilogy. I thought the writing was lovely in terms of describing the use of magic and the romance development, but I kept drifting away from the story.

A great deal of the charm and fun of the book is the opposites-attract format of both the world-building (magic meets bureaucracy) and the main characters, Robin and Edwin. Robin is a genial baronet who has inherited unexpected responsibility upon the deaths of his parents. A life-long jock, he has just fallen into a government job. He has spent his entire life unaware that magic exists.

Edwin is the youngest son in a large, aristocratic, and magical family. Unlike Robin, Edwin is a massive nerd. He also has a government job, one which brings him into Robin’s kind but confused orbit. Watching these two interact and learn to fully appreciate one another is delightful. They make each other better simply by exercising mutual respect and empathy. I adored the slow build of the romance and lines like these:

You look like a Turner painting and I want to learn your textures with my fingertips. You are the most fascinating thing in this beautiful house. I’d like to introduce my fists to whoever taught you to stop talking about the things that interest you.

I also liked the worldbuilding which uses Robin as an audience surrogate. Because Robin is intelligent but not brainy, we don’t get complicated explanations for magic, but because Robin has a million questions we get a sense of what can and can’t be done with magic. Who uses magic and how tells the reader a great deal about the characters and the society they move in. There are some real surprises and a lot of showing instead of telling.

The problem with this book was that the plot became so very glacial in pace that I lost interest after a while. Even though this book is packed with sexy scenes, heartwarming confessions, humor, and world-building, after the halfway point I felt, dare I say, bored. The book has everything except for a compelling plot and a good sense of momentum.

Readers who love thoughtful, specific worldbuilding and very thoughtful characters who slowly fall for one another will likely enjoy this book, though be warned that the tension and pace felt uneven and may require some reader perseverance.

Robin Blyth has more than enough bother in his life. He’s struggling to be a good older brother, a responsible employer, and the harried baronet of a seat gutted by his late parents’ excesses. When an administrative mistake sees him named the civil service liaison to a hidden magical society, he discovers what’s been operating beneath the unextraordinary reality he’s always known.

Now Robin must contend with the beauty and danger of magic, an excruciating deadly curse, and the alarming visions of the future that come with it—not to mention Edwin Courcey, his cold and prickly counterpart in the magical bureaucracy, who clearly wishes Robin were anyone and anywhere else.

Robin’s predecessor has disappeared, and the mystery of what happened to him reveals unsettling truths about the very oldest stories they’ve been told about the land they live on and what binds it. Thrown together and facing unexpected dangers, Robin and Edwin discover a plot that threatens every magician in the British Isles—and a secret that more than one person has already died to keep.