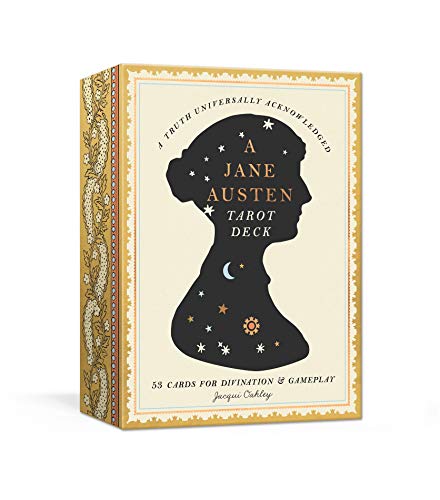 Genre: Not a Book

A Jane Austen Tarot Deck by Jacqui Oakley features beautiful art and thoughtful associations between Austen themes and tarot themes. Alas, it claims to be a tarot deck despite only having 53 cards (as opposed to a standard tarot deck’s 78 cards). Had it stuck with being an oracle deck instead of also trying to be a deck for tarot “and gameplay”, I would have been much happier with it.

Note: This deck is not to be confused with Tarot of Jane Austen by Diane Wilkes. Wilkes’ deck is a full tarot deck and although I deeply desire it it is out of print and only available for huge amounts of money. If any of our readers have this deck tucked away in a sock drawer, congratulations, you are rich and I am envious.

Let me start off with some technical info. I’m going to be referring to playing card decks, oracle decks, and tarot decks. Playing card decks are the 52 card decks that we use for poker or bridge or, if you have small children, many, many games of “Go Fish”. They have four suits (diamonds, clubs, spades, and hearts), and the cards are all number cards with the exception of court cards, also called face cards. These are the kings, queens, and jacks, one each per suit. Most decks also include two jokers. A Jane Austen Tarot Deck has 53 cards (four suits, court cards, and one joker) and claims to be “suitable for gameplay.” I played a couple of games of solitaire with it and aside from difficulty shuffling the cards, which are large, all was well.

Oracle cards can come in any number of cards to deck, and the meanings are assigned by the artist. The artist might design different layouts (ways of placing the cards so that they make a story together). However, most commonly the reader pulls one card from the deck and looks at its meaning for some sort of insight into a problem or situation.

Tarot decks are similar to oracle decks but much more structured. A standard tarot deck has four suits (usually swords, wands, coins, and cups), court cards, and 22 cards called The Major Arcana, for a total of 78 cards. The Major Arcana are cards like Death, the Lovers, and The Tower. These are iconic cards representing huge concepts and events. Each card, whether Major Arcana or otherwise, has a distinct meaning, and there are hundreds of possible layouts that allow the reader to create new meaning by looking at the cards in combination with each other. While the meanings have a lot of fluidity, there are more-or-less agreed upon meanings for the cards that are shared across decks and readers.

All this background is so that you will understand me when I say that calling a 53 card deck “A Tarot Deck suitable for Divination and Gameplay” is quite a stretch. A Jane Austen Tarot Deck is a lovely oracle deck, but would have been even lovelier had it dropped the attempt to also be a tarot deck. By trying to make cards do too many things at once, their meaning is lost, which is a pity as the meanings are often very clever.

The artist, Oakley, tries to make the deck fit multiple purposes by combining Major Arcana cards into number cards, but in tarot, number cards have their own meanings. For instance, in this deck, the King of Clubs doubles as “The Magician” card from the Major Arcana, and the Magician is depicted as Jane Austen at her writing desk. This is a lovely interpretation of The Magician card, and I thought it was completely suitable. However, what happened to the King of Clubs? In a standard deck, the King of Clubs (usually Wands) means something specific to that card! You can’t just double them up, because you lose the King of Clubs/Wands! It makes my teeth hurt! It’s wrong, I tell you! WRONG!!! In trying to do too much, the deck fails to do much of anything.

Tarot rant aside, the art is lovely. The suits are clubs, diamonds, hearts, and spades, and they are beautifully decorated with Regency motifs and characters and quotations from Austen’s novels. The art in this deck is delicate, pastel, and romantic. The deck is large enough to let the details of the art shine, although that does make the deck hard to shuffle, especially if you have tiny hands like I do. Some cards depict characters, some have quotations, some have more abstract symbols, but all are appropriate, barring confusion when multiple meanings are squished together. Even the backing is gorgeous. If the imagery wasn’t muddied by the attempt at tarot overlay at all, it would be great. 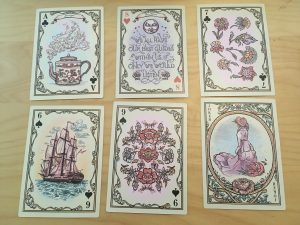 There is a small booklet that comes with the deck. It is helpful in terms of card associations but not in terms of layouts, because, again, it’s trying to be an oracle deck and a tarot deck despite not being entirely suited for both.

I recommend this deck as a “one card draw” kind of oracle, but not as a tarot stand-in. How I wish the artist had gone with one or the other, in which case this would have been a wonderful deck of cards. As it is, I am enjoying this card set as long as I use it for oracle use or gameplay and not for tarot. The artist has done many Austen projects and clearly knows her Austen, and I will use this deck frequently even if only to admire the art. My draw for the day is “Strength,” illustrated by a steaming teapot. Truly, nothing fortifies so much as a good cup of tea! I’ll have some now.