Moonlight on My Mind

Enemies to Lovers, Marriage of Convenience 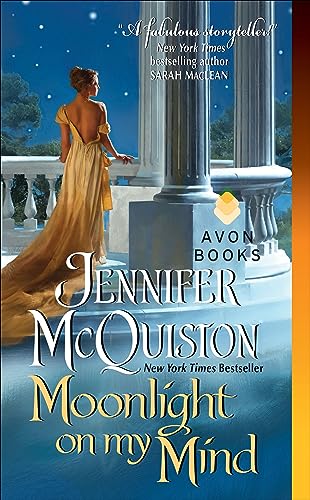 To ruin a man’s life once takes a regrettable mistake.

To do so twice takes a woman like Julianne Baxter.

Eleven months ago, Julianne’s statement to the authorities wrongly implicated Patrick, the new Earl of Haversham, in his older brother’s death. The chit is as much trouble as her red hair suggests, and just as captivating. Now she has impetuously tracked him to the wilds of Scotland, insisting that he return home to face a murder charge and save his family from ruin. A clandestine wedding may be the only way to save her reputation—and his neck from the hangman’s noose.

Julianne has no objection to the match. More and more she’s convinced of Patrick’s innocence, though when it comes to igniting her passions, the man is all too guilty. And if they can only clear his name, a marriage made in haste could bring about the most extraordinary pleasure…

Moonlight on My Mind by Jennifer McQuiston