We love the show Letterkenny for a host of different reasons. Since you might have a bit of time for tv watching, we figured we’d share everything we like about it.

Letterkenny started as a series of shorts called “Letterkenny Problems,” which were then turned into a show when Crave, a Canadian subscription channel, picked up the series. Letterkenny is a fictional small town in Ontario, and the show focuses on Wayne, Katy, Daryl, Dan, and assorted other characters. Each episode is basically what the title card says: “There are 5000 people in Letterkenny. These are their problems.”

We love this show a LOT.

Ok, y’all, why do you love Letterkenny?

Tara: If there’s one thing that will get me every time, whether I’m reading a book or watching a film or TV show, it’s when it has heart. Letterkenny has heart in spades, and I was first struck by that in the second episode, when Wayne and Katy throw a super soft birthday party for Daryl.

I don’t want to spoil how that goes because it’s so lovely and I still treasure the memory of experiencing it the first time. I just love how it shows that friendship can mean doing something that makes you uncomfortable, because you love your friends THAT much. And that heart continues throughout the series, season after season. The writers skate a fine line to keep things funny while rarely actually getting mean (at least, in the early seasons) because so much of the humour comes out of embracing characters for their quirkiness rather than putting them out there as a punching bag for laughs.

Also, as a Canadian, I adore just how damn… Canadian the show is. I grew up in a small town in Ontario and I live in Alberta now. Somehow the show manages to feel familiar to both places, especially with how it shows rural and smalltown life (fun fact: my grandparents had a roadside stand for their farm, like Wayne and Katy’s). I’m sure other provinces would lay claim to it as well, because it captures that spirit so well.

AJ: I also grew up in a small town. Mine wasn’t in Canada, but I agree, it’s spot on accurate to small town life in general. The first time I watched it, I literally fell over laughing when the skids came onscreen. I know those guys! I used to go to parties with those guys and leave early because they were annoying!

I think you can also see the small town influence in the pace of the show. The issues are small-scale, but giant in the characters’ lives. Everything is a big deal, from breakups to hockey games to how to cook a steak. (Grill marks, bud.) Almost every event is a tradition. There’s a lot invested in “the way things are done.” Along with that, a lot of the humor comes from repetition. They do an AMAZING job of setting up running gags that keep paying off across multiple seasons. Just say “To be fair” in a room full of Letterkenny fans and you’ll see what I mean.

Speaking of the humor, that’s got to be my favorite part. I love love love banter, and this show has so much of it. It’s snappy and smart, focusing on wordplay over cheap gags, and they pretty much never pause to explain themselves. It reminds me of classic 1940s comedies, if they were extremely Canadian and also pretty filthy.

Your fave could never.

It’s a really silly show, but also a really smart one. Even though many of the characters start out looking like over-the-top caricatures (and I really do NOT love how they handled gay representation with Glenn in the first season), they develop depth over time. You get the sense that the showrunners are poking fun, but that they really do respect the characters. No one is played for a laugh without empathy. Kindness and honor and mutual aid are the order of the day. Like Tara said, it’s got heart.

Maya: So I’m neither Canadian nor from a small town, so when I first saw a promo image for Letterkenny on Hulu: 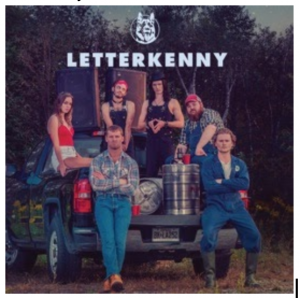 I totally made some assumptions that weren’t true. For me, it screamed a whole lot of (American) good ol’ boy attitude that I was not really interested in exploring further. Like, I’ve seen that story and I’m good. I’m not from a rural area, but my dad is and I’ve spent a fair bit of time in a small little desert town 60 miles from the US-Mexican border. My dad’s Mexican-American and so is just about everyone in the community that he’s from. I’ve struggled watching American shows set in rural areas because I never get to see communities like the ones I’ve actually been in and much like many American shows set in big cities (like Friends or Girls or Sex and the City or How I Met Your Mother or Seinfeld), those shows are often absent of any (major or complex) characters of color.

Which is all to say, oh thank you tv gods (or you know, creators/writers Jared Keeso and Jacob Tierney) for having that above shot be kinda a lie and giving me a tv show set in the country that has Black and indigenous representation. It is a delight and a departure from the worst, most lazy reflexes of tv sitcoms.

But honestly I was already in love with Letterkenny before I even met the extremely forthright Gail :

…and the always down for a fight Tanis.

Tanis is a complete badass

Like AJ mentioned, the banter and word play is top notch and you get a sense of it literally seconds into the first episode–when two hockey players decide to try and pick a fight with Wayne, and Wayne’s choice of de-escalation is to immediately start mocking their posturing for a fight and their manscaping choices.

Which takes me to another thing I love about Letterkenny. With men at the helm of the show and with most of the main characters being men, Letterkenny has a fun time engaging with and interrogating various performances of masculinity. Wayne spends much of the first season trying to reestablish his position as the toughest guy in Letterkenny, which mostly means he gets in fights with other guys that think they are the toughest guy in Letterkenny. Through those series of fights we get to learn more and more about Wayne as he makes a series of decisions that are fundamentally based in whether punching someone in the face in that situation aligns with his morals. Which it often does! While it would have been easier, definitely, to write Wayne as a guy who just fights all the time, anytime, the writers respect their characters enough to imbue them with complexity that reflects a recognition of their humanity. It’s clear that we are watching a tv show where the creators love the community they are depicting and that love is reflected both in the characterization and in the ways the characters interact with each other.

I really struggled to find a clip that sums up all the ways I love the show. I haven’t even begun to share why the women are so great or how that small town never really sits in judgment for any person’s sexual behavior or how two of Wayne’s serious romantic partnerships are with women of color, but let me leave you off with a little silliness as two characters work their way through the alphabet as they explain what winter is like.

Elyse: I live in a small-ish upper Midwest community and this show could easily be set here. The characters are people I recognize from my own experience, and part of what I love is that it really encapsulates what living in a rural, cold-weather community is like. You may not like everyone in your community, but when a man asks for help, you help them.

There’s a fundamental kindness and lack of judgement present in the series. Katie is polyamourous and bisexual and no one shames her. The McMurrays are swingers who sometimes make everyone mildly uncomfortable, but they’re still embraced by their community. The gay hockey players, Daxy and Ronsie, are accepted. The show is very funny, but that humor never feels mean.

Also the show shits on The Bachelor and I’m always there for that.

Sarah: I started watching this show after someone posted the cold open on Reddit, Adam and I watched the clip together, snot-laughed ourselves silly, and realized we could watch the whole show on Hulu.

“What sort of backwards fucking pageantry is that?”

Since then we’ve watched the whole series twice, and as Tara said, it has heart. There are fundamental rules to the community, and to how you treat people, and how conflicts are resolved (or not resolved). That moral center makes the show welcoming and to my romance-reader brain, very welcoming. And the debates, the conversation, and the intelligence are all so much fun. Among my favorite elements: how they all care for each other in different ways, how Katy’s bisexuality is totally nbd, how there are polyamorous relationships all over the place and again, nbd, how they may get on each other’s nerves individually and in groups, but always have each other’s backs when necessary. And how they talk about the most random shit while they drink.

It’s not perfect, as AJ mentioned, and some later decisions ticked me off, but there are some episodes I could watch over and over. It reminds me a lot of Brooklyn 99 in that the comedy is based in repeated exploration of human fundamental kindness and decency amid really weird people placed in ordinary and bizarre scenarios. We had tickets to the live show in March, before their US tour was postponed due to the Quarantimes, and while I don’t like crowds, large gatherings, traffic, and staying up past my bedtime, I was seriously excited for Letterkenny Live.

What about you? Have you watched Letterkenny? Did you like it? If you haven’t, pitter patter! In the US, it’s on Hulu, and some episodes are online in full length, too.

Stuff You Should Be Watching