Gooooood morning! How is everyone doing? I know there is never a time when you don’t want some Cover Snark, but I also think we all need it now more than ever.

The first cover is one I saw in the wild! 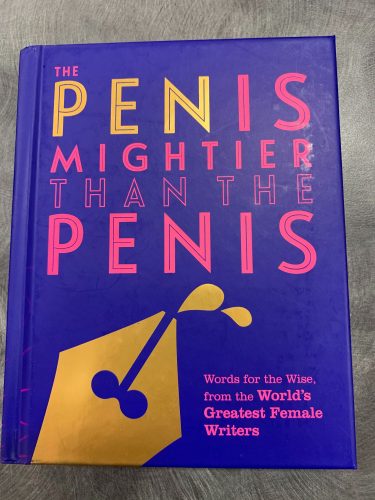 Amanda: Some choices were made

Aarya: It’s like a Rorschach test. When you look at the image, do you see a pen with ink drops leaving the tip? Or do you see… you know.

Amanda: Lots of ink splatters inside

EllenM: yeah not sure if the pen really is mightier than the penis on this cover.

Catherine: I didn’t even see the pen at all and had to hastily close my browser before my colleague saw it!

AJ: “What should we put on the cover of this book of feminist quotations?” “Well, I was thinking a big spurting dick and the word PENIS in big letters a couple of times.”

Catherine: I do feel like the cover somewhat misses the point of the entire book…

AJ: It’s driving me a little crazy, because penis ownership and feminism aren’t even opposites! Lots of women have penises! But I just don’t feel like trans inclusion was, shall we say, the goal here. From Stephanie: I’m not even sure what to say about this one. He’s blue, and green, and looks like he forgot to take off his nicotine patches as he put the next one one. And the planet at the bottom, does it have the face of a disapproving father? Or is that just me?

Catherine: I was just thinking that’s NOT how you place defibrillator pads.

Claudia: I’m getting alien vibes from her French-manicured pointy nails.

Sneezy: Not seeing the dude’s face is extra weird when we see the dudette’s face

Charlotte B: With that sort of patina he ought to be stuck on top of a historical building holding a trumpet or a lyre or something.

CarrieS: She looks like she’s about to demand a refund from the manager.

Catherine: Oh yeah, she’s completely over him. And so is the planet.

AJ: His chest is a Windows 98 logo. Also, his name is extremely “late 2000s middle-class white kid, but make it Space.” I’m picturing his mom in her maternity spacesuit in front of a blackboard that says: From Carole: At first I thought the book title was The Pug Out.

Sarah: Is that what he’s named his weenus? The Pug?

Elyse: I know very little about the sportsball, but I didn’t think they wear towels in the dugout.

Catherine: Some very bold choices on this cover, that’s for sure. I got The Bug Out, which is what happens when you overlay text like that…

CarrieS: I’ll never understand why armpits are supposed to be sexy. Shana: Nothing says sexy like glass in your armpit

Sneezy: Wouldn’t want to go near HIS ego.

Amanda: I definitely don’t feel so good after seeing this cover.

AJ: “Look, when I said the hero suffers from fragile masculinity, I didn’t mean his abs should literally … oh, never mind, it’s fine.”

Catherine: In Rorschach Blot Musculature land, can anyone else see the winged guy in the middle of this guy’s chest? He’s in profile, and is holding a dagger above his head, ready to stab someone, and he looks a bit like a figure from a Greek vase (And if I’m the only one who can see him… what would Dr. Freud have to say about that?)