This month I give you not one Kickass Woman but rather twenty-nine, as profiled in the graphic non-fiction book Brazen: Rebel Ladies Who Rocked the World ( A | BN | K | AB ). I loved this book so much that I couldn’t resist sharing it with you all. The panels are simple and classical in style (mostly rectangles), which allows for the focus to be on the information presented. The art is clever and colorful and the text is packed with information but also with humor and good storytelling. Here are a few of the kickass women included:

Nzinga, Queen of Ndongo and Matamba (today part of Angola).

Nzinga lived from 1583-1663, and was sent by her father to negotiate with the Portuguese when she was only sixteen. Upon her father’s death, and following the slightly mysterious deaths of her brother and his son, Nzinga declared herself Queen, then declared herself to be a man who would never marry, then occupied herself with fighting the Portuguese until her death at the age of eighty. 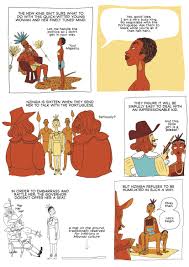 Clementine Delait, owner of the Cafe of the Bearded Lady.

Delait (1865 – 1939) had facial hair which she shaved every day. She was happily married to a baker named Joseph. After seeing a bearded lady in a carnival, Delait decided that while she would not submit herself to carnival gawkers, she would be willing to let her beard grow out and use this as publicity for her bar, bakery, and cafe. Always in charge of her own celebrity, she and Joseph ran a thriving business while she also sold photos of herself. She adopted a baby, became a WWI Red Cross Nurse as well as a mascot00, advocated for the new sport of bicycling, and died well-to-do and beloved at 74.

Alizadeh was born in 1996. Her family considered selling her into marriage when she was ten, but they moved to Iran instead, where Alizadeh discovered Iranian and American rap music. When she was sixteen, her family planned to sell her again. Alizadah convinced documentary filmmaker Rokhsareh Ghaemmaghami (another kickass woman) to buy her for six months. This gave Alizadeh time to record a music video called “Brides for Sale” which went viral on YouTube. The success of the video won her support from the organization Strongheart, which got her to the United States and to school for the first time. Today Alizadeh uses her music to support rights for women with the organization Girls Not Brides. 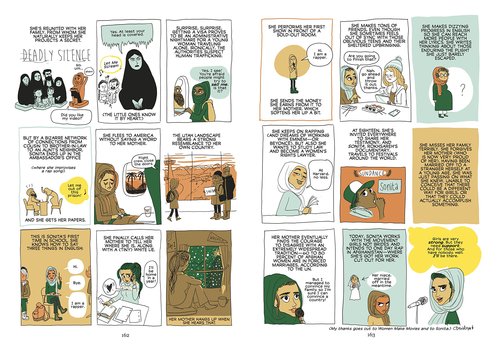 This was such a fun book. Several of the women profiled have also been profiled here, but many others were new to me. If you are looking for a holiday gift for the feminist in your life, I recommend this one!

Strong TW for the following video for bride seeking and child abuse.