Soggy Bottoms is back!

Sorry I was away for so long. One of my roommates had house guests for about a month (don’t get me started) and it was nearly impossible to use my kitchen for an extended period of time.

I really waffled on trying to pick my next bake. (Ed. note: I see what you did there.)

Did I want a bread, should I try something smaller and more delicate, or should I go for a cake? If I had to pick a baked item, I’d say I’m more of a cake person than anything else. So cake it was.

Then, I had to pick which cake to bake.

I should note that I’m one of those people who flounders when presented with too many choices. My boyfriend really wanted me to make Fraisier cakes, mainly because he loves making Frasier jokes and I utterly hate them (the jokes, not the cakes). But I’m planning to save those for last, just out of spite.

Time limit: Two and a half hours.

Resources: I was able to find Mary Berry’s recipe for this bake online. Thank god!

Process: I want to thank everyone in the last post who recommended that I get a kitchen scale for metric measurements. It was a huge help and there was no need for me to do any math. Seriously, give me a workaround for math and I’m there. If you’re curious, I wound up purchasing this lightweight and affordable model. I spilled some egg whites on it and wasn’t too worried about having to clean it off.

Before going into this recipe, I had never made an angel food cake before. My grandmother would always buy the prepackaged ones from the grocery store bakery, plus strawberries and some Cool Whip. I had no idea how much of a pain in the ass making an angel food cake was, but in retrospect, it makes sense why they would be sold prepackaged. They’re so fussy!

Not only do you have to separate a million egg whites from the yolks, but you have to make sure you fold the flour in carefully, lest you let out all the magical air from the batter. And you have to cool it upside down, allowing gravity to naturally help the cake keep its shape while separating it from the pan.

In case you didn’t know (which I didn’t), angel food cakes are usually made in special tins that have little legs. It’s weird and looks like a version of a robot that could scuttle around on some spaceship. I also may have “cheated” with this bake. The time limit was two and a half hours, but I took the liberty of getting all the ingredients out and measured beforehand. I didn’t want to be running around the kitchen mid-baking process. At the end of the bake, I was under the time limit by around fifteen minutes, though I know if I had factored in my measuring, I would have easily been over.

The most nerve wracking part was the cooling process. I know you aren’t supposed to grease the cake tin or else the batter won’t climb the sides and give the cake its height. I wish the cake came out a touch higher, but honestly, I was just happy I got it out of the tin in the first place.

The rest of the elements — curd and cream — were easy enough to do. The curd was so tart and yummy. However, I had hoped the cream would have had a little bit more of a flavor, despite my adding more vanilla extract than the recipe called for. The cake definitely tasted like angel food cake and lasted less than a week in my apartment. I essentially fed it to everyone who came by and would have probably forced it on my mail person, if need be.

Would I make this recipe again? Probably not. It’s just such a pain, but it was definitely rewarding to make my very first angel food cake.

However, I will be making that curd again. 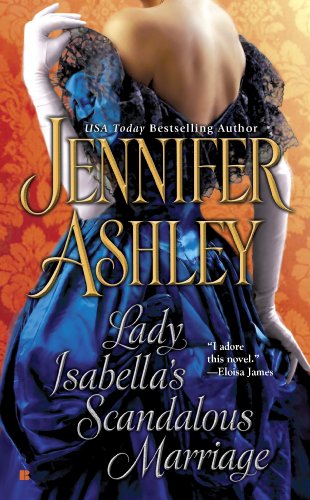 The Madness of Lord Ian MacKenzie by Jennifer Ashley ( A | BN | K | G | AB ) is one of my favorite historical romances and Lady Isabella’s Scandalous Marriage is the second book in the series. I remember wanting to know more about Isabella and why she hightailed it from her husband, and what he was going to do to win her back. But for whatever reason, I never picked up the book after finishing The Madness of Lord Ian MacKenzie years earlier.

While baking, I’ve been trying to listen to more audiobooks so that I can still move about the kitchen or clean up while reading, so I was really happy to find Lady Isabella on Audible’s Romance Package. Though it’d been years since I’d read Lord Ian, there wasn’t an issue in jumping back into the plot without feeling lost.

As someone new to audiobooks, I’m still trying to find my groove on what works for me. Which genres, which narrators, etc. In this case, I wasn’t a fan of the narrator. There was something about her voice that couldn’t command my concentration and I kept having to go back thirty seconds at a time to fully grasp what she’d said. The premise was total catnip and I do recommend reading Lord Ian before this one, just to get a better sense of the backstory. Personally, though, I’d prefer to read this one in paper.

If you enjoyed this bake or just love The Great British Bake Off, you can keep track of my technical bakes in the Soggy Bottoms introductory post.

Was pre-measuring my ingredients before the countdown started a huge no-no? Thoughts on the angel food cake process?

And be sure to let me know which recipe you think I should tackle next!