After the What is Love? conference this past week at the Library of Congress, several people asked me to Storify the tweets I wrote as I transcribed as much of the proceedings as I could.

Here you go! The collection of all my tweets can be found online at Storify.

Three out of the four sessions are included, as I was on the third panel and thus couldn’t tweet it. I don’t think I could have physically accomplished a transcription either, as I was sitting on the same panel as Brenda Jackson and Robyn Carr, and they are hilarious. If you’d like to read all the tweets about it, you can also have a look at the hashtag used for the event, #poprom.

I’ve been trying to summarize my thoughts about the conference and every time I end up on a long winded tangent, or find myself unable to explain myself to my own satisfaction. I think the last few things I said in that tweet collection best encapsulate my feelings on the conference, specifically that the conference covered more in one day than most romance conferences discuss in a week.

I wish the format had been different, in that each session began with a prepared 3 minute statement from the panelists, and some were much better at this than others, especially those who kept their remarks under five minutes and addressed the topic at hand. For example, I could have listened to more historical detail on 12th century love stories for hours. (You can read just that section starting here when Dr. William M. Reddy began speaking.)

Moreover, each panelist came to the table with a different perspective on the questions that framed each session – which we were given in advance. But the panels didn’t attempt to discuss any of the questions as a group before turning the session over to a Q&A. I love that the goal was to discuss as much as possible with the people in the room – that’s terrific, especially given how many people I met who took vacation days off work to attend.

But without the framing of those questions and any discussion among the panelists about those questions, the topics went wildly off the rails sometimes, depending on what question was asked (or statement was given, hence my tweeting of the “Should You Ask a Question” flowchart).

Even with that frustration, the amount of knowledge and the breadth of the topics discussed was terrific, and I didn’t want the day to end. It was a tremendous honor to be there at all, much less as part of a panel on community in romance – and I mean that most precisely. The romance genre was part of a one-day conference in THE LIBRARY OF CONGRESS.  That alone is amazing, and I’m thankful to have been a part of it.

‘Tis the season for romance coverage, because it’s Valentine’s Day. Much of it is not worth sneezing at, but a few pieces I must link to. Amanda wrote up a collection of recommended romances for Alibris should anyone need an idea for what to read next.

She shares her favorites across several genres, including The Bride by Julie Garwood:

The Bride is an older historical romance with a Scottish setting, and red tartan certainly goes with the color theme of February. A comfort read with a marriage-of-convenience plot, this is one I try to make a habit of re-reading every year.

And I’m over at Kobo’s blog with a recommended list of historical romances, should you be looking for Still More Recommendations (and who isn’t, really?):

If you’ve been looking for a trip into the past, here are some great options. There’s a lot of romance in history, and as this collection will demonstrate, there’s a lot of history in romance as well.

What books would you add to our lists? 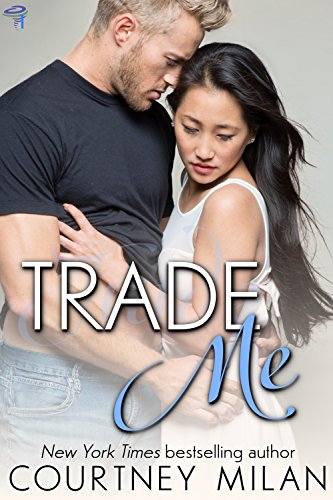 A | BN | K | AB
But wait – one more link! Sara Brady, copyeditor extraordinaire (she copyedited Lighting the Flames) and romance journalist, has an interview with Courtney Milan at The Billfold about how Milan can and does write about money, beginning with her New Adult contemporary, Trade Me:

Where did the idea for Trade Me come from?

There was a point where I told someone, “I could never write a billionaire romance because …” Fill in the blank there. The thing, though, is that every time I tell myself I can’t do something, I figure out how I would do it.

Part of the reason I might say I have difficulties writing a billionaire romance is that as part of my background, I’m a former lawyer/law professor, and so when I think about billionaires, I think about people skirting the rules of Sarbanes-Oxley, about people who never pay ordinary income tax and usually only pay capital gains tax, and so forth. I don’t think of them as … super-sexy beings who have an infinite amount of money. I think anyone who has a billion dollars — unless they’re blowing it all, which some billionaires inevitably do — inevitably is someone who has no time to spend money.

It’s a great interview – you should read the whole thing.

I was a guest on the podcast Read it and Weep, talking about the film 10 Things I Hate About You. We had a divided reaction to the film, but the conversation is hilarious.

If you like podcasts about books, films, audiobooks and smart discussions about funny things, you’d like that one a lot.

So what have you been reading online this week? Any links to share?