Bertrice Small, one of the original “Avon Ladies,” and the author of more than 50 romances, including many that hold the honored position of “the first romance I ever read” for many readers, died yesterday at the age of 77.

I am genuinely sad to hear that she’s died, though I know she was in poor health. She was fearless and gracious, smart and tenacious. Small was one of those authors whose books were a part of my foundation in romance. I read Catherine Coulter’s historicals first, but when I found Blaze Wyndham ( A | K | G | AB | WorldCat ), well, my mind was indeed blown. Blaze was a dramatic and sexually saturated romp through Tudor history. That book followed me from home to college, and then to Spain when I studied abroad and only brought three books in my luggage. I have probably re-read Blaze Wyndham over 100 times, easily. When I sat down to write this, I knew exactly where my copy was on my bookshelf. When I first read that book, some of the sexuality went sailing over my head. When I re-read it now, I am still surprised at some of the passages (heh heh) because they were shocking then, and, because I know how old I was when I first read them, they still are.

When I reviewed Blaze Wyndham, I wrote about the time I met Bertrice Small, at a book signing for her RWA chapter on eastern Long Island (next stop: Portugal). I was very much in awe of her, trying not to make a whibbering doofus of myself, because all I could think was, OMG, that’s Bertrice Small. That’s Bertrice Small. OMG. You should breathe now, Sarah.

Small was incredibly gracious and passionate about her books, the time periods in which she wrote them, and her career as a writer. She was very, very proud of what she’d accomplished, too, and I admire that. When she was at a Romantic Times convention years ago, she was part of a panel on historical romance, and I remember sitting in the audience, still trying to keep myself together because OMG Bertrice Small, and hearing other women, some of them multi-bestselling authors in their own right, having that same wheezeful reaction.

She was, and is, a tremendously influential writer in the romance genre. If romance were a building, like, say, a library, her books would be one of the marble archways on the first floor, holding up everything that was built afterward. Many readers have passed through Small’s books to get to the rest of the genre.

My other memory of Small herself was how welcoming she was. As passionate as she was about her books, she was equally warm in person, especially to readers, even readers like me who were trying to steady their breathing half the time. I told this story on Twitter last night, and I mentioned it in my review of Blaze Wyndham, but when I went to Long Island for the book signing – which was held in a winery, which was brilliant. Buy wine AND books in the Same Place? Perfect! – afterward she invited me back to her home, I kid you not, to see her etchings.

Her office was pink and gorgeous, with framed art from her early covers on the walls, and yes, etchings. I looked at every one – including some of the original artwork for what became the cover of my edition of Blaze. The wall of books by her desk made my heart speed up, with all the leather bound historical texts and out-of-print editions of books on Tudor history sitting next to each other. I was afraid to touch anything, even the floor, and I could barely fit everything I was looking at into my eyeballs coherently. I could have stayed there for hours just looking.

It wasn’t just the Tudor history itself I was looking at, but the combination of history and the history of the romance genre, all in one office. It could be a museum, that one room.

A reader named Athena sent me a remarkable link last week to a collection of photographs taken by Mary Ellen Mark, published in LIFE Magazine in 1981, accompanying an article written by Jennifer Allen about the first RWA conference and eight women who at the time were among the most successful romance novelists.

I’m honestly not sure what Rosemary Rogers was doing on that bed in the first picture, but if you scroll down, you’ll see Bertrice Small and her husband George, and a small paragraph about them. The end is my favorite part:

When prudes complain about the endless entwining and exploding, says Small, a former convent student, “I just tell them it’s all in the Bible.” Fans savor the details, down to beribboned underblouses and busks–“If you’re going to undress a heroine,” says Small, “you’d better damn well know what she’s got on underneath.”

Last year Bertrice Small received the Nora Roberts Lifetime Achievement Award by RWA, and she couldn’t attend the ceremony. When I met her on Long Island years ago, she’d said how much she wanted that award, and how much she wanted more people to know that she and the other Avon Ladies had been part of the establishment of what we call romance.

In the introduction from Eloisa James, and in the video shown at last year’s RITA ceremony, Small talked about the earliest parts of her career. You can see the portion of the ceremony as I live blogged it if you’d like to read the transcript beginning at about 8:37pm, but I’m reproducing that portion of the transcript here. 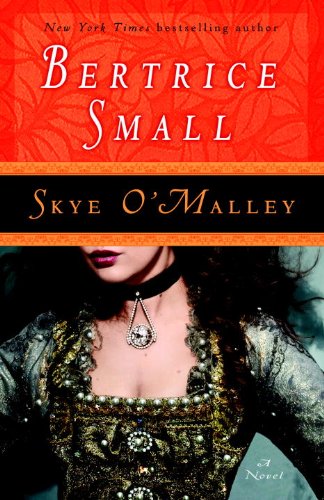 A | BN | K | AB
James quoted Small in her introduction as saying, “We are the antecedents of all of today’s romance authors.” While many books featured heroines fainting in to the arms of marauding pirates, Small thought, HER pirate, Skye O’Malley, would be a girl and she’d have a fleet of ships.

Small told a story about her first book, “a historical in the style of Anya Seaton,” which she spent 2 years researching and writing. She sold The Kadin ( A | BN | K | G | AB | WorldCat ) to Putnam, but the publisher told her later that they wouldn’t be publishing it. Small found out that the president had cancelled an editor’s books after a fight with that editor. The president’s assistant was a Gibbs girl, who went to Gibbs Secretarial School – as did Bertrice. So Bertrice called her up, and received her assurance that the president would be calling her back.

The president said to her, “Mrs. Small, I suggest you stay home and be a good mommy to your little boy and forget all of this writing business.”

Small responded that she’d be in this business long after he was gone.

And she was. Last she heard, he was practicing law in New Jersey.

It was another three years before she sold The Kadin again. But she did, and it was published in 1978.

Small said, “I do not write weak women.” She also said that if she were at that ceremony, she’d have said her only advice is “to believe in your work. Be willing to accept criticism and act on it if it’s valid. But if it’s not, go on straight ahead.”

Then Small herself appeared in a video accepting the award, and told another origin story — this time, not hers, but the genre’s as she saw it. Back in the 70s, an editor at Avon, which was not the Avon we know today, took home a manuscript. That editor came in Monday determined it would be published. Back then, Avon published mostly reprints of hardcovers. Many people argued with that editor, but either way, and perhaps it was to shut her up, they published it: Kathleen Woodiwiss’ The Flame and the Flower.

Then a new manuscript arrived addressed, “To The Editor of The Flame and the Flower.” It was published as well: Sweet Savage Love by Rosemary Rogers.

Romance, said Small, can be anything you want it to be: adventurous, exciting, wildly romantic.

“Our genre was reborn,” she said.

There will likely be a few tributes to her, and I’ll try to find and link to them. Here is Jenny Trout’s.

ETA: And RWA has posted her Lifetime Achievement presentation on YouTube. Thank you for the heads up, Courtney!

Farewell, Bertrice Small. Thank you for believing in your work so that all of us could read it, and for your influence on the romances that were born afterwards. Farewell and many, many thanks.